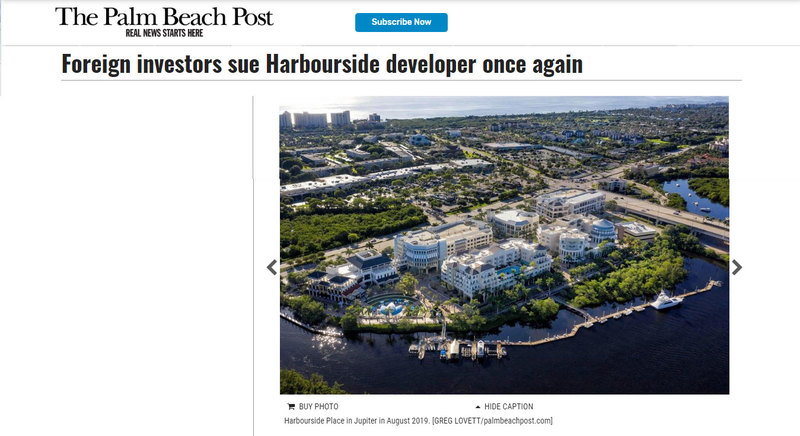 Chinese nationals say they committed their money to an investment fund run by Mastroianni without knowing about a kickback scheme.

Harbourside Place developer Nick Mastroianni II has once again been sued over his investment dealings, this time by a woman Mastroianni’s lawyer has called a publicity hound with a record of making questionable claims.

The woman’s lawsuit says nine Chinese citizens poured $500,000 apiece into investment funds controlled by Mastroianni without knowing they were steered his way through a secretive kickback agreement. The complaint was filed last month in federal court in South Florida.

If the Chinese investors knew about the agreement — allegedly involving an immigration consulting firm directing investors to Mastroianni in return for finder’s fees — the suit says they never would have gotten involved with the businessman.

The funds are financing a Times Square project on Broadway in Manhattan to redevelop a hotel, theater and entertainment and retail space. The investors were enticed by the U.S. EB-5 program, which offers foreigners green cards allowing them to live in the United States if they invest enough money into job-creating projects.

Lead plaintiff Xuejun Makhsous said U.S. Immigration Fund, based in Jupiter and chaired by Mastroianni, is one of the biggest EB-5 regional centers in the country. Centers like Mastroianni’s connect foreign investors to EB-5-financed projects.

Not an attorney herself, Makhsous lives in Illinois and is a self-described EB-5 rights advocate who investors brought on board when they wanted out of the Broadway project, according to the suit.

“Mastroianni bribed the Chinese brokers,” Makhsous said in an interview. “They use the finder’s agreement and steer the Chinese. ... Mastroianni never met any of the investors.”

Mastroianni declined to comment through attorney Richard Haddad, who also declined to answer questions. Makhsous has sued both for defamation in an unresolved federal case out of Illinois.

In a filing for that case this summer, Haddad and another attorney, Peter Cooper, accused Makhsous of running ”‘scorched-earth’ litigation tactics” that included frivolous claims.

She sues “to seek publicity,” they wrote. In an Illinois state case, she was accused of making false claims in a pleading and was sanctioned by a judge, the attorneys wrote.

Mastroianni faces other lawsuits tied to his EB-5 activity, including those related to Harbourside Place, the waterfront complex in Jupiter that opened in 2014.

A Palm Beach County court filing from June indicates a number of plaintiffs had dropped out of a 2018 case or planned to do so, including more than 30 who were settling out of court. Another federal suit filed this year is in mediation.

In the new Makhsous case, the lawsuit says the Chinese nationals were instructed to sign onto the investment funds without receiving key information, such as risk disclosures.

Eight of the nine Chinese investors identified in the lawsuit got their $500,000 back, but backed off claims to another $50,000 because they were “coerced” by an attorney who had connections to Mastroianni, according to the lawsuit. The ninth investor is still owed more than $500,000, Makhsous said.

Mastroianni’s alleged behavior is not particularly rare in EB-5 investing, Makhsous said. She described the immigration program as rife with corruption.

“Ninety-nine percent of it is fraud against investors,” she claimed.