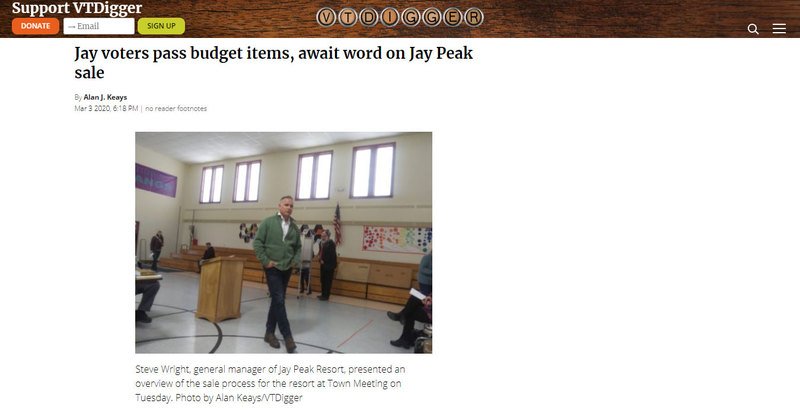 Steve Wright, general manager of Jay Peak Resort, presented an overview of the sale process for the resort at Town Meeting on Tuesday.

Voters in Jay approved all school and municipal spending items Tuesday with little debate but left the annual town meeting with one big unanswered question: Who will purchase the Jay Peak ski resort, the town’s largest taxpayer?

The resort is valued on the town’s grand list at about $124 million, which results in an annual tax bill of $2 million, or roughly two-thirds of the property taxes for the town.

Steve Wright, the resort’s general manager, provided the roughly three dozen Jay residents gathered Tuesday with an overview of the sale process for the resort. He provided a similar presentation last year.

The ski area has been overseen by a court-appointed receiver since investor fraud allegations were leveled at its past owner Ariel Quiros in April 2016, and it has been on the market for about a year.

“I just wanted to talk about where we’re at up there and what I know about the sale process right now,” Wright told the crowd inside the local school.

Wright said at last year’s town meeting there were about a half dozen entities interested in purchasing Jay Peak.

“We’re still at that stage,” Wright said Tuesday. “We went through a process where they put numbers together, they put bids forward, we looked at the bids, we went back to them and asked them to adjust some things and to come back with a second round of bidding.”

He added, “We expect to have that second round back to us, hopefully, by the beginning of spring, sometime in May.”

The only question for Wright from the crowd was about who was submitting bids.

“I can’t really get into it,” he said. “There are some players that you would expect, and there are other ones I’m a little surprised at.”

He described the bidders as entities both inside and outside of the ski and hospitality industry.

Jay Peak officials, including Michael Goldberg, the court-appointed receiver overseeing the ski resort, have said little about the sale process over the past year.

A Jay Peak official did disclose at a local meeting in Jay last summer that several entities had expressed interest, and have traveled to the resort to check it out.

Among those entities was Alterra Mountain Company, based in Denver, Colorado, which also owns Tremblant ski resort in Quebec and Stratton in Vermont. Late last year, Alterra purchased another ski resort in Vermont, Sugarbush in Warren.

Wright on Tuesday would neither confirm or deny if that company remains as a would-be buyer for Jay Peak.

“I don’t want to upset the sale process,” he said in declining to name names.

Wright did say Jay Peak’s ski pass sales are up 10% from the previous year. Also, he said, bookings for weddings at the resort have reached the levels they were at prior to the receivership, about 80 a year.

“All things being equal we have a chance to have one of the highest, if not the highest, top-line revenue seasons in our history,” Wright said. “That would be a big deal for us.”

He then cautioned that the weather plays a big role in the resort’s fate. “We still have a couple of innings to play here so we’ll see where we end,” Wright said.

According to civil lawsuits filed by the state and federal regulators in the spring of 2016, Quiros, then Jay Peak’s owner, and Bill Stenger, at the time the resort’s CEO and president, misused $200 million of investor funds raised through the EB-5 program.

The investments were to pay for massive upgrades at Jay Peak, including three hotels, three condo complexes, and a water park.

The developers also proposed projects in other communities in northern Vermont, including a hotel and conference center at Burke Mountain ski area as well as a proposed biomedical facility in Newport.

Stenger and Quiros have since reached monetary settlements in those civil actions, with neither admitting or denying the allegations against them.

Last May, both Quiros, and Stenger, as well as two of their associates, were indicted by a federal grand jury in Vermont on criminal charges including fraud and making false statements to the government in connection with a separate EB-5 project.

Both Stenger and Quiros have pleaded not guilty to the charges against them. A trial is set for later this year in October.

Dave Sanders, Jay Selectboard chair, said after the meeting Tuesday that the sale of the resort will certainly have a big impact on the town, though there is little local leaders can do about it.

“It’s really out of our hands,” he said, adding it is a matter for those in charge of Jay Peak to resolve. “It’s really all in their court right now,”

Sanders did say that it’s in the interest of all the parties for the resort to sell to the highest bidder.

“Any difference between what it’s assessed at now and what it sells for could have an effect on the grand list,” he said.

A wide range of dollar values for the resorts have been discussed over the years. The U.S. Securities and Exchange Commission, during a May 2016 court hearing, valued Jay Peak at $42 million, based on average profits.

He said the receivership is estimating the value of Jay Peak at around $90 million to $100 million.

Sanders, the Jay Selectboard chair, said property sales in Jay in recent times have been consistent with the assessments set by the town.

“People are buying properties up there,” he said. “I don’t see anybody low-balling to get out.”