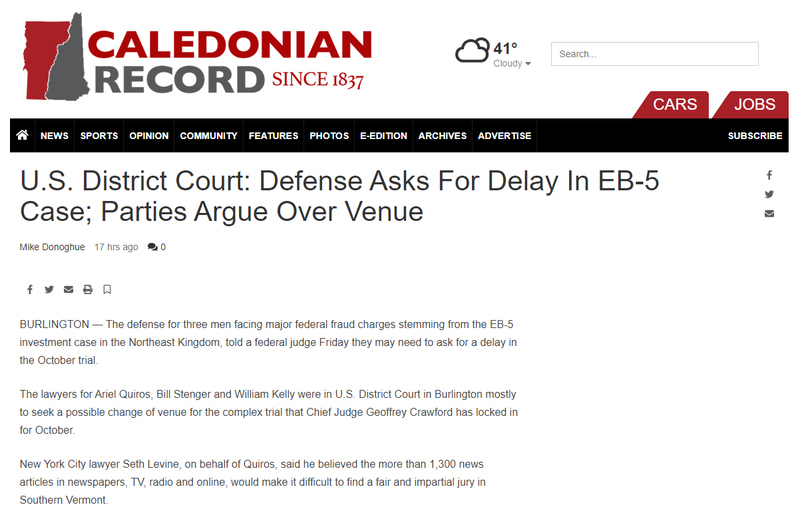 The defense for three men facing major federal fraud charges stemming from the EB-5 investment case in the Northeast Kingdom, told a federal judge Friday they may need to ask for a delay in the October trial.

The lawyers for Ariel Quiros, Bill Stenger and William Kelly were in U.S. District Court in Burlington mostly to seek a possible change of venue for the complex trial that Chief Judge Geoffrey Crawford has locked in for October.

New York City lawyer Seth Levine, on behalf of Quiros, said he believed the more than 1,300 news articles in newspapers, TV, radio and online, would make it difficult to find a fair and impartial jury in Southern Vermont.

Jessee Alexander-Hoeppner from the U.S. Department of Justice in Washington, countered that for the most part the stories were accurate. She also noted that a small percentage of the potential jury pool in six southern counties have probably followed the case.

She said courts have ruled judges should give jury selection a chance before making a major decision like moving a trial. She also noted potential jurors need to answer if they can be fair – not whether they have read anything.

Levine also questioned whether Crawford faces a conflict of interest because two potential witnesses in the trial could be former Gov. Peter Shumlin and U.S. Sen. Patrick J Leahy, D-Vt.

Crawford started the hearing giving a description of his limited connections with both men. Crawford said his name was presented to Shumlin for appointment to the Vermont Supreme Court in 2013 and shortly after being named to the high court, he was recommended by a committee to Leahy to fill a seat on the federal bench. He said he has had little contact with either.

As the hearing was coming to a close Friday afternoon Burlington lawyer Brooks McArthur on behalf of Stenger, first raised the question of delaying the trial. He noted he continues to be flooded with documents from the U.S. Attorney’s Office, including 11,000 pages provided on Thursday night.

“We will probably have millions of documents,” McArthur estimated by trial time. “I expect they will share my concern,” he said looking at the other defense lawyers.

McArthur said completing his review of documents is now projected for the end of next summer when he had initially thought it might be at the end of this calendar year.

Crawford offered some push back. The judge said both sides had locked in on an October trial knowing all the lawyers had full schedules in other courts. Crawford also told McArthur the defendants should have full knowledge of their documents and can help the defense lawyers.

Boston lawyer Robert Goldstein, on behalf of Kelly, said it is one thing to get the records, but another to have time to later conduct an independent investigation after reviewing them.

Levine, on behalf of Quiros, said he also was concerned.

Crawford has set Oct. 5, 2020 for the start of the trial. The prosecution has said it expects to need 15 days to introduce its case, while the defense plans to use 4 to 6 days for its case.

Quiros, who owned Jay Peak ski resort, pleaded not guilty to 12 felony counts on May 22. Quiros, 63, of Key Biscayne, Fla. was the only defendant to attend the hearing on Friday.

Kelly, 70, of Florida and an adviser to Quiros, has pleaded not guilty to 10 felony counts.

A fourth defendant, Jong Weon Choi, a South Korean businessman, remains at large. He is named in 10 criminal counts in the indictment.

The government has said the fraud began about 2008.

Much of the morning court session focused on the news coverage. The defense also maintained the U.S. Attorney’s Office painted an unfair picture about the charges.

Levine was critical of U.S. Attorney Christina Nolan and two of her assistants for conducting a news conference in Newport on May 22, the day the indictment was announced.

Levine said the news conference was held at the site of a demolished business in downtown Newport that prosecutors tried to link to the fraud. He said there was no connection between any of the criminal charges and the construction hole in Newport.

“Is it a crime in Burlington?” Levine asked about having a big construction hole in a downtown. He said as he walked from his hotel to the courthouse on Friday he passed by the big hole where Burlington’s major mall once stood.

He played a news video of the press conference with Nolan saying, “We thought it was important to do this in the place in Vermont that was most shook, most rocked, most affected by the fraud.”

He said no mention was made about the positive aspects to the Jay Peak Resort, which will have “an 8-figure profit” this year with a ski center, restaurants, a water park and more.

They have been strong supporters of the EB-5 program that allows non-citizens to obtained immigration papers in exchange for $500,000 investments in businesses and additional jobs.

Levine also has questioned if there is a possible conflict of interest by the U.S. Attorney’s Office in Vermont in prosecuting the case. He said part of it centers on former U.S. Attorney Eric Miller and his wife, Elizabeth Miller, who is a former chief of staff for Shumlin.

Eric Miller has said early in the case in order to avoid any appearance of a conflict, he recused himself from the investigation. He said he was left completely in the dark as the case progressed and was never involved in any decision making. Miller said First Assistant U.S. Attorney Eugenia A.P. Cowles took the lead.