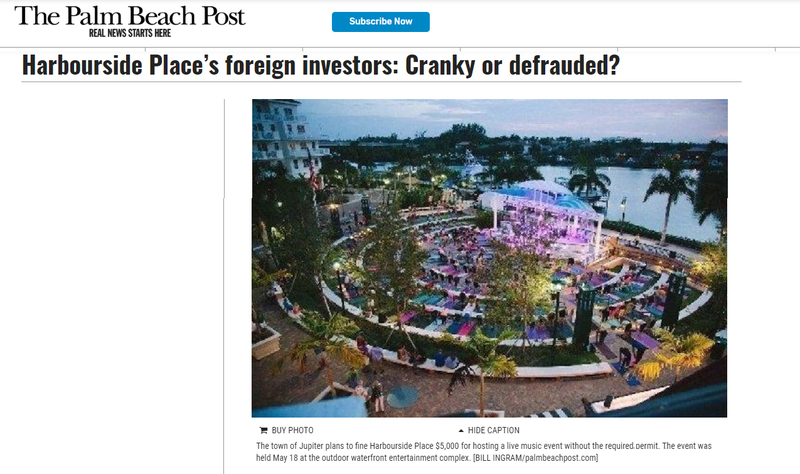 Nearly 200 investors poured $99.5 million into the mixed-use project on Indiantown Road, through the federal EB-5 program that grants U.S. visas to investors.

A Harbourside court filing called the plaintiffs bringing a lawsuit for fraud against Harbourside “a disgruntled minority rump group of wealthy Chinese investors.”

Nearly 200 investors poured $99.5 million into the mixed-use project on Indiantown Road, through the federal EB-5 program that grants U.S. visas to investors.

Harbourside, which opened in 2014, features a Wyndham Grand Hotel, restaurants, shops and offices.

In October, nearly 80 investors sued Harbourside and its developer, Nicholas Mastroianni II, alleging fraud. In particular, the Palm Beach County Circuit Court lawsuit claims Mastroianni structured the deal in such a way as to eliminate their ability to get their money back.

But in recent filings, Mastroianni has hit back hard, claiming the investors knew the risks of investing, and agreed to take them, but are suing anyway.

According to one filing, Mastroianni and Harbourside said the investors, having obtained their coveted green cards for themselves and their families, are seeking to “avoid business terms of the investment that got them their green cards in the first place.”

Most of the Harbourside investors now are living in the United States, Harbourside lawyer Richard Haddad said in a recent interview.

But Haddad warned their immigration status could be in jeopardy as a result of the Harbourside lawsuit.

That’s because the Chinese immigrants had to submit sworn petitions to the U.S. Citizen and Immigration Services that they read and understood the documents, which stated that Harbourside was a speculative project subject to risk, including the loss of their entire investment.

In addition, each investor also had to swear under oath to a U.S. Department of State Consulate Officer that they understood their investment in Harbourside was not guaranteed.

If the investors had stated that they thought their investment was guaranteed, they would have been denied their visa application, Harbourside’s legal filing said.

A lawyer for the investors did not return phone calls and emails seeking comment.

The federal EB-5 program allows foreign investors to obtain a permanent green card to live in the United States if they invest $500,000 in a project that creates U.S. jobs. The program also includes a provision for a possible return on their investment.

But in the lawsuit filed last year against Harbourside and Mastroianni, dozens of Chinese investors allege they haven’t received a return on their money and, instead, have been fleeced by Mastroianni in a “carefully planned fraud designed to yield Mastroianni unfettered access to their money to finance his project.”

They want a court to appoint a receiver to oversee Harbourside Place.

Mastroianni wants a court to throw the investors’ lawsuit out.

In their original complaint, the Harbourside investors said they read and relied on the project’s offering material when deciding to make their investment.

But in an amended complaint filed in April, the plaintiffs changed their story.

They said they didn’t rely on the offering materials written in English but instead relied on advertising.

The lawsuit explains why.

“Despite focusing primarily on Chinese investors for the project, defendants never undertook to have the private placement materials translated into Chinese,” the lawsuit said.

But the advertisements were translated into Chinese, the lawsuit said.

Those ads, the lawsuit said, touted claims of a 2 percent return, the first-lien position for repayment, and other rosy promises.

“This case marks yet another example of how the...EB-5 program is being abused by crafty business people who obtain easy and cheap money from foreigners whose native language is not English,” the complaint said.

The investors further claim Mastronianni structured the deal to eliminate them as a first-priority lender and instead convert their investment into equity.

In fact, they say Mastroianni positioned the project so he could control “every aspect” of the EB-5 investors’ money, and use the money free of any independent oversight or accountability, according to an amended complaint.

Harbourside said the debt-to-equity conversion was outlined as a possibility in the offering documents and agreed upon by at least 116 of the 199 investors.

Harbourside further defended itself by noting that the plaintiffs changed their story after several were deposed and said under oath that they had read the offering materials.

In one court document, Harbourside blamed the declining retail environment in general, and the town of Jupiter in particular, for hurting the project’s net income.

It’s unclear from the filing how much net operating income Harbourside throws off each year.

But Jupiter has levied fines against Harbourside in a long-running battle over noise complaints. On July 10, Harbourside agreed to pay the town $41,000 in fines and fees to settle the dispute, which had led to $300,000 in potential fines.

Harbourside’s court filings said it is doing what it can to repay investors.

For instance, one filing said that Mastroianni is forgoing management fees and income so that Harbourside can pay 100 percent of all net operating income to the investment partnership until all of the $99.5 million is returned

Most importantly, the investors received their green cards, “so it is a success, in that sense,” Haddad said.

These and other good-faith actions by Mastroianni “are not indicative of a nefarious scheme to defraud investors,” a Harbourside filing said.

With the case growing increasingly acrimonious, the matter seems far from over. In fact, in a recent court filing said the case is moving toward a trial that could last 45 days.

Alexandra Clough writes about real estate, law, and the economy.