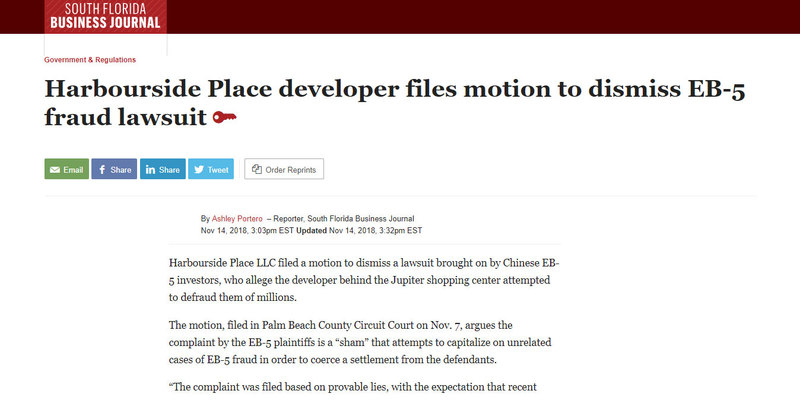 Harbourside Place LLC filed a motion to dismiss a lawsuit brought on by Chinese EB-5 investors, who allege the developer behind the Jupiter shopping center attempted to defraud them of millions.

The motion, filed in Palm Beach County Circuit Court on Nov. 7, argues the complaint by the EB-5 plaintiffs is a “sham” that attempts to capitalize on unrelated cases of EB-5 fraud in order to coerce a settlement from the defendants.

“The complaint was filed based on provable lies, with the expectation that recent headlines of fraud in unrelated investments by unrelated parties in other projects in the United States’ EB-5 Investor Program … will mask the egregious falsehood in the complaint,” the motion said.

The EB-5 visa program grants U.S. residency to foreign investors who contribute at least $500,000 toward businesses that will create a minimum of 10 full-time U.S. jobs. In a complaint filed in Palm Beach County Circuit Court last month, 78 Chinese EB-5 investors alleged EB-5 fundraiser and developer Nicholas Mastroianni II intentionally fell one investor short of reaching a $100 million goal that would have given them first-priority loan status.

Mastroianni is the founder of the U.S. Immigration Fund, which connects foreign investors with opportunities that allow them to retain U.S. residency through the EB-5 program.

The complaint alleges Mastroianni fell short in order to eventually control the new senior lender and intentionally structured the financing of Harbourside Place in a way that would prevent the EB-5 investors from having the ability to foreclose on the loan to get their money back. It also alleges the investors should have been reimbursed for their loan in late 2017.

A total of 199 foreign investors purchased stakes in Harbourside Place for $99.5 million. The investors in question each paid $540,000 for their share.

According to the motion to dismiss, the EB-5 investors knew their first-priority loan would be subordinated if the developer did not reach the $100 million goal. Initial offering documents attached to the motion show plaintiffs were provided with a March 2014 report that described the status of the project and proposed taking on additional debt to get the necessary capital to pay for Harbourside’s construction costs. The documents explain the additional debt would have superior rights to the $99.5 million provided by the EB-5 investors.

The attached documents also include an August 2017 letter notifying the EB-5 investors that the developer was unable to repay investors’ loans by the December 2017 deadline, and was, therefore, exercising its option to offer them a preferred equity position instead. The developer had the ability to do so under the initial terms of the deal that investors’ had agreed to, according to the documents.

“The evidence proves that 100 percent of the investors’ capital was properly used in the project,” said Richard Haddad, the attorney representing Harbourside Place and Mastroianni. “The investors got exactly what they bargained for and approved.”

Harbourside Place features restaurants, retail stores, galleries, a hotel and a marina. The $170 million development was completed in December 2014, according to Allied Capital and Development of South Florida’s website.

Seventy percent of the project's Chinese EB-5 investors have received permanent U.S. residency through the deal, including at least 60 of the 78 plaintiffs who filed suit, according to the motion.

Miami law firm Levine Kellogg Lehman Schneider + Grossman is representing the EB-5 plaintiffs. The firm did not respond to the Business Journal’s request for comment.