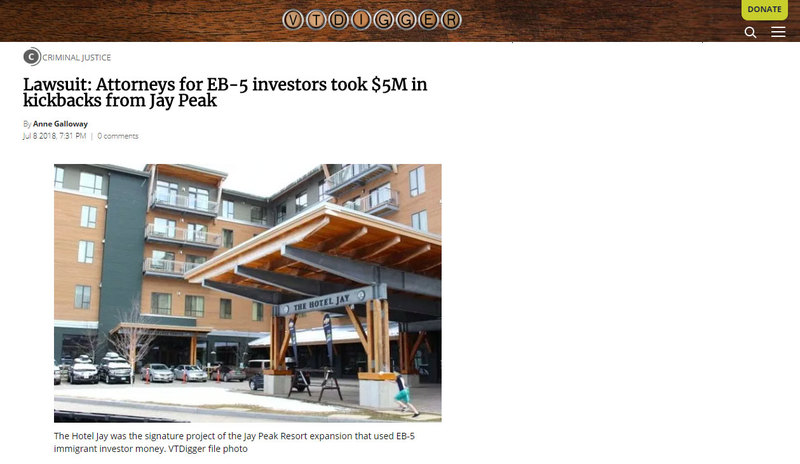 The Hotel Jay was the signature project of the Jay Peak Resort expansion that used EB-5 immigrant investor money.

The former developers of Jay Peak Resort gave $5 million in kickbacks to more than 100 immigration attorneys, according to a lawsuit pending in federal court.

Bill Stenger, the former CEO of Jay Peak, gave immigration lawyers a $25,000 payment for every foreign investor they brought into the Northeast Kingdom EB-5 program. Stenger asked lawyers to sign a “legal fee agreement” for the payments.

The nine defendants named in the class action case allegedly took $2.8 million in payments from Stenger.

One of those attorneys, Shen Jianming, of ShenLaw, received a total of $1.25 million in kickbacks from Jay Peak, the lawsuit alleges. In 2013, Shen was asked by Stenger to accompany and act as a translator for state officials who were promoting the Jay Peak projects in China.

A group of EB-5 investors in the Jay Peak projects is suing immigration attorneys who both represented them and took money from the resort. They say the lawyers, who had a clear conflict of interest, did not warn them about the fraud at Jay Peak when there were warning signs indicating that Stenger and the former owner of the resort Ariel Quiros had misused funds.

In April 2016, the Securities and Exchange Commission charged Stenger and Quiros with 52 counts of securities fraud and the misuse of $200 million in investor funds. The two men settledwith the SEC in February. Neither admit or deny the allegations. Criminal charges are still pending.

The state-run Vermont EB-5 Regional Center was responsible for overseeing the projects and officials ignored warnings about the fraud at Jay Peak until VTDigger reports brought allegations of financial impropriety to light. In the wake of the scandal, the U.S. Citizenship and Immigration Service has threatened to shut down the center.

More than 800 foreign investors were left in limbo as a result of the fraud. Each EB-5 investor put up $500,000, plus a $50,000 administrative fee, for the development of eight projects associated with Jay Peak (five of which were completed) in exchange for a green card. About half do not yet have green cards because of the fraud. Since the SEC crackdown, about 100 investors have gotten their money back.

In addition to the $550,000 each of the plaintiffs put up for the investment in Jay Peak, each investor paid up to $18,000 in fees to their immigration attorneys.

Three of the Chinese investors — Wei Wang, Guangyi Xiong and Xiaogeng Feng — say they never would have invested in Jay Peak projects had their attorneys warned them about allegations of fraud that surfaced in 2012 and 2014.

In February 2012, Douglas Hulme, a business partner of Quiros and Stenger, asked the developers to provide balance sheets, bank statements, wire transfers and source of use funds for the Jay Peak projects. When they refused to provide the documents, he declared in a statement to 100 immigration attorneys that he no longer had faith in the financials at Jay Peak.

Two years later, a group of 20 investors complained that their money had been misappropriated, the hotel they invested in was seized by the developers and a related project known as Penthouse Suites had been double sold to investors.

“Basic due diligence would have confirmed that the first wave of investor funds were illegally misappropriated when they were used to fund the purchase of Jay Peak resort,” the lawsuit alleges.

Instead of performing the basic duties of client representation, the immigration attorneys were paid to lure them into the trap, the investors say.

The kickback scheme “set the stage” for the Ponzi-like scheme that led to the misappropriation of $200 million in investor monies, according to the Barr Law Group filing with the U.S. District Court in Burlington.

The attorney who most actively sought investors was Shen Jianming, a Flushing, New York, lawyer. Shen advertised directly to foreign investors and promoted Jay Peak as one of the best EB-5 projects in the United States “with a 100 percent I-526 petition approval rate” and one of the best returns on investment.

The three plaintiffs retained Shen as their immigration attorney in 2013, 2014 and March of 2016 (just prior to the SEC crackdown), and were not made aware that Shen was also representing the interests of Stenger and Quiros.

Shen brought in more than 70 investors to the AnC Bio Vermont and 30 other investors in other projects, Barr Law Group writes.

The investors allege that Shen “conducted no meaningful or basic due diligence” into the finances of the AnC Bio Vermont. Had he done so, Shen would have discovered that a sister project, AnC Bio Korea in Seoul, had gone bankrupt, also amid allegations of investor fraud in Korea, according to the lawsuit.

Nor did Shen inform investors about the fraud charges the SEC brought against the Jay Peak developers in 2016.

“But for Shen’s wrongdoing, deceit, omissions, and failure to follow through on his attorney obligations, Wang, Feng and Xiong would not have subscribed” to AnC Bio Vermont, Barr Law Group writes.

Because of the fraud, all three investors — who had hoped to live in the United States — remain in China.

The lawsuit charges that the attorneys are guilty of malpractice, breach of contract, breach of good faith, breach of fiduciary duty, unjust enrichment and deceptive and reckless conduct.

The investors are seeking disgorgement of the profits made by lawyers from the transactions, $6 million in punitive damages and attorneys fees.

In response to the subpoena, Kessler wrote that the I-924 and I-924A applications, which are standard forms provided by a regional center to the U.S. Citizenship and Immigration Service “are not readily available” and suggests that the Barr Law Group seek the records from USCIS — not the state.