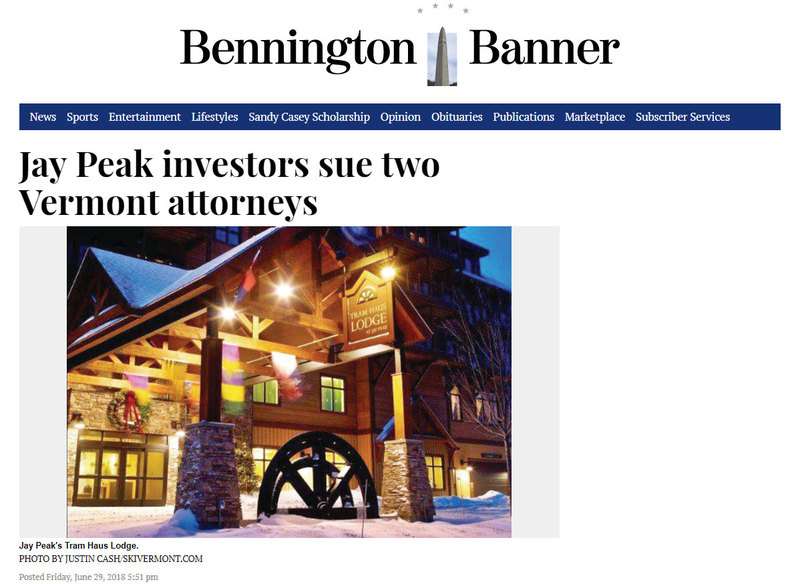 A group of Jay Peak investors is suing two Vermont lawyers, contending the attorneys had a conflict of interest.

Edward Carroll and Mark Scribner, formerly of Carroll & Scribner, represented both the foreign investors and the resort, the lawsuit alleges.

The plaintiffs, 21 EB-5 immigrants who invested $10.5 million in the Tram Haus, a hotel at Jay Peak, also allege Carroll & Scribner failed to alert them of potential red flags that would have indicated that the developers of the resort were engaged in a massive fraud involving hundreds of EB-5 investors. The lawsuit against Carroll & Scribner is pending in U.S. District Court in Vermont.

The Tram Haus investors lost ownership of the hotel in August 2013 when Ariel Quiros, the former owner of the resort, and Bill Stenger, the CEO and president, seized possession of the property in violation of a limited partnership agreement with the investors. In 2014, the investors filed complaints with officials at the state-run Vermont EB-5 Regional Center and the commerce agency, which oversaw the Jay Peak projects. Instead of helping the investors, state officials spurned the investors and told them to seek recourse with Quiros and Stenger.

Through the EB-5 immigrant investor program, foreign investors each put at least $500,000, plus $50,000 in administrative fees, into qualified projects. If each investment leads to the creation of 10 jobs in the United States, that investor becomes eligible for residency in the country.

In April 2016, the Securities and Exchange Commission filed a lawsuit alleging 52 counts of fraud against Quiros and Stenger. The SEC investigation showed that the developers had used money from Tram Haus investors to purchase the resort in 2008. Quiros and Stenger raised more than $350 million from 800 investors from 2008 to mid-April 2016 for seven projects in northern Vermont.

The Tram Haus investors who are suing Carroll & Scribner say they hired the two attorneys to represent them in immigration filings with the U.S. Citizenship and Immigration Service. They say they were not aware that the lawyers also represented Jay Peak and that Scribner written the limited partnership agreement for the project. That agreement included many conflicting clauses and became the vehicle Stenger used in July 2014 to claim in an interview with VTDigger that he and Quiros had the right to seize the hotel.

In addition to the limited partnership agreement, the firm also provided legal services to the partnerships for projects led by the Jay Peak developers, including, the lawsuit states, "Investor compliance issues, business model matters and related business and real estate matters."

Rapid USA Visas Inc., a business that provides assistance to foreign citizens seeking visas to enter and reside in the United States, had been providing assistance to EB-5 program investors in Jay Peak projects.

Hulme notified Carroll & Scribner and 100 immigration lawyers that Rapid USA had "terminated its relationship with Jay Peak Inc. including related web sites because RAPID USA no longer has confidence in the accuracy of representations made by Jay Peak, Inc. or in the financial status of and disclosures made by the various limited partnerships."

The 21 Tram Haus investors allege that Carroll & Scribner did not share that information with them.

"Defendant Carroll and Defendant Scribner knew, or should have known, that the contents of the Rapid Visa USA letter would be directly relevant to Plaintiffs' decisions as to whether to make and/or maintain their investment in the Jay Peak EB-5 project." the lawsuit stated.

The three-count lawsuit alleges breach of contract, breach of fiduciary responsibility, and negligence on behalf of the law firm toward to the investors.

"Defendant Carroll and Defendant Scribner breached their contractual duties when they failed to inform Plaintiffs of their conflict, that they were no longer able to represent as a result, and that Plaintiffs needed to seek other legal counsel in order to protect their interests," the lawsuit stated. "As a direct result of said breach, Plaintiffs suffered substantial financial losses for which they seek recompense."

The lawsuit was filed in federal court in March. In April, Andrew Maass, a Rutland attorney representing Carroll, and Christopher Ekman, a Burlington lawyer representing Scribner, filed answers to the lawsuit denying any wrongdoing.

Those answer stated, "the representation of Jay Peak was disclosed to and acknowledged by each Plaintiff."

The answer added that the investors have green cards permitting them to become U.S. residents and received their investment money back through previous settlements stemming from other litigation.

"Our clients were hired by these people to shepherd them through the immigration process," Maass said Thursday. "These people have all received their green cards."

He added that Carroll & Scribner did what they were hired to do.

Both Maass and Ekman said they wouldn't respond to the specific claims in the lawsuit against their clients. Ekman said he wasn't interested in trying cases in the press.

"I'm not going to go ahead and respond to questions regarding particular allegations that have been made by the plaintiffs, or provide you with particular explanations regarding answers that we have made in our pleadings," Ekman said. "That is all subject to the litigation and the process and that will all be developed over time."

"We're not going to get into a point by point response to the allegations that were made," Maass said.

John Evers, a Burlington attorney representing the 21 investors, said Thursday that any notice his clients received of Hulme's alert was "not timely."

"Our folks eventually found out about the letter, but a lot of time had passed," Evers said.

Just when that notice was provided, as well as any other matter of dispute, he said, will likely become clearer through the discovery process of the court case. "That's really where we're going to find the real answers," Evers said.

Should there still be matters of dispute, ultimately, he said, a jury may be called up to decide.

Evers said the investors want to recoup their investment and are entitled under Vermont law to prejudgement interest, or 12 percent per year on $500,000 over a five- to six-year period.

Carroll & Scribner dissolved the law firm on June 1, 2014. Carroll is now retired; Scribner is an attorney with Primmer Piper Eggleston and Cramer, one of the largest law firms in Vermont.

Earlier this year, Quiros settled with the SEC for $81 million and ceded over the Jay Peak and other properties. Stenger has agreed to pay the SEC $75,000. Both men neither admit nor deny wrongdoing as part of that case. The state lawsuit against them remains pending. Federal prosecutors have said they are also conducting a criminal probe.

Among the 21 investors bringing the federal lawsuit filed earlier this year is Tony Sutton, an investor from London.

He was also a plaintiff in a lawsuit filed last year, alleging that three state entities and 10 current and former state officials were either negligent in overseeing the state-run EB-5 regional center during the time of the Jay Peak developments, or complicit in a conspiracy to cover up their wrongdoing.

A judge has since thrown that lawsuit out. Lawyers for Sutton have appealed the decision.