EB-5 investment immigrants at risk, a project in South Florida is facing a foreclosure 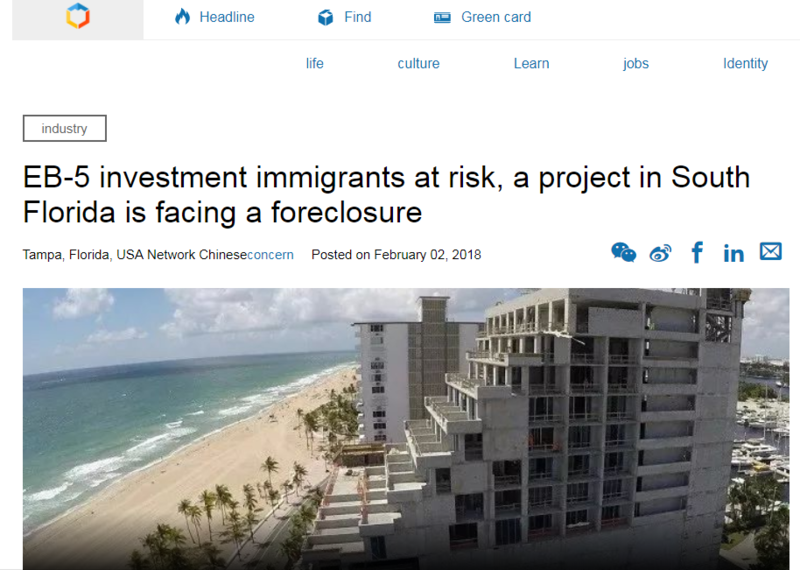 Las Olas Ocean Resort, which is being built by the sea in Fort Lauderdale, South Florida, faces a foreclosure sale with 60 Chinese EB-5 investment immigrants. Bancorp Bank, which provided a loan of $ 50 million to the construction project in 2013, filed a lawsuit with the United States District Court on January 25, 2018, demanding the recovery of the foreclosure for the project as the project currently owes the bank nearly 3 Thousands of millions of dollars in loans, while December 2017 owners (550 Seabreeze Development LLC and JAWOF 515 Seabreeze LLC) did not pay for the month.

Bancorp also demanded that other people take over the construction management of the hotel because of the current incompetent and poorly managed hotel management, resulting in a serious delay and overrun of the project. The bank also warned that the current hotel contractor Straticon is likely to suspend construction and leave because it did not receive the due dues. Contractor Straticon has placed a $ 5 million property disposal right on the hotel.

According to the bank's petitions, the chief developers of the project are Raymond Parello, Ken Bernstein, Eugene Kessler, and Jack Kessler. Among them, Ken Bernstein is an immigration lawyer. His American Life Investments, LLC investment firm is listed on the US Immigration Planning Board's Investment Immigration Regional Center listing (code 1031910192). Several years ago, he raised 30 million U.S. dollars (500,000 U.S. dollars each) from 60 Chinese immigrants under the project name. The failure of the construction project is likely to affect these investment immigrants.