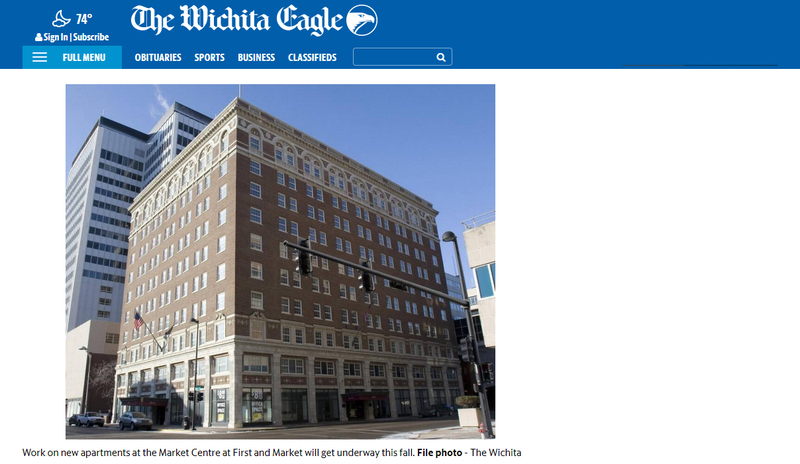 Work on new apartments at the Market Centre at First and Market will get underway this fall.

It may not look like much has happened in the two years since a Virginia partnership announced it was converting the Market Centre to apartments, but a lot has happened behind the scenes.

“We kind of slowly but surely pushed this forward,” says attorney Paul Ruby. He adds, “This is a little slower than we would have preferred.”

He, Robert Lubin and David Roos are partners in the Washington, D.C.-based American Investor Immigration Funds. That’s the umbrella company for KCHH, a partnership that includes eight foreign investors who are participating through the national EB-5 program. The program grants foreign investors U.S. residency in exchange for creating jobs. Ruby, Lubin and Roos are members of Red Leaf Development, the general partner in the apartment project with KCHH.

He says most EB-5 developments are in major metropolitan areas.

AIIF does most of its work in small to midsize markets, and almost all of the projects are historic renovations.

That’s in part because of historic tax credits that are available.

The group has about 30 projects in various stages of completion.

Ruby says the number of projects has been one holdup getting work started at the Market Centre, which was built at the southwest corner of First and Market as the Lassen Hotel in 1919.

Also, he says, the government approval process for EB-5 projects can be lengthy with background checks on foreign investments.

The group is almost ready, though.

The $25 million project will feature 110 apartment units — 55 one-bedroom units and 55 two-bedroom units — in the 11-story building.

“I would say they’re the higher end of a mid-tier apartment,” Ruby says. “These are nice.”

He says there will be stainless steel appliances, high ceilings and amenity areas on the third and fourth floors, including an event room for tenants to use.

All the units will be rentals.

Ruby says the spaces will be modern with semi-industrial touches.

He says the group will close on loans at the beginning of October.

“Certainly within the month of October we should be under construction. I think that’s realistic.”

Ruby says he expects the project to take about 15 months to complete.

“The shell of the building is in relatively good condition.”

He says one area that often causes historic renovations to take longer is trying to keep windows intact or re-create the look of older ones.

“This project’s no exception.”

AAIF has hotel and senior living projects, but multifamily housing is its biggest focus.

Ruby says the partners hired a third party to do market research, and he says it showed more apartments are needed downtown.

“Quite frankly, the lenders wouldn’t let us borrow if they didn’t agree.”

Look for more information on the apartments as work starts this fall.