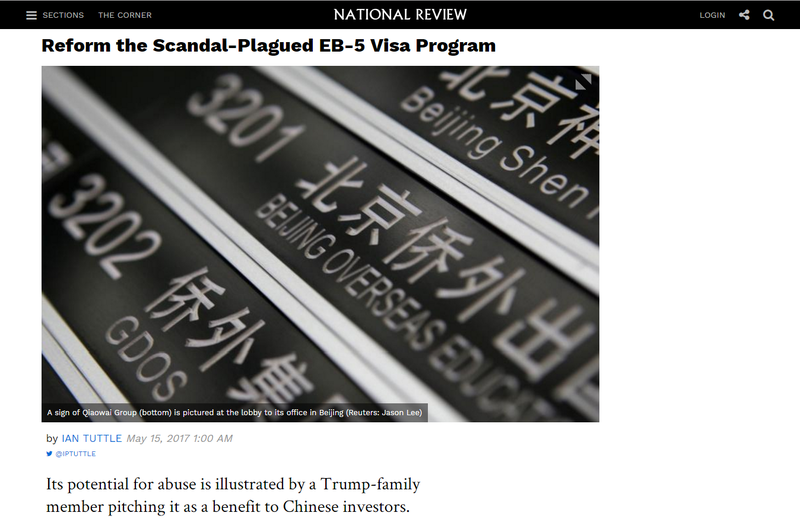 Nicole Kushner Meyer’s troubling pitch to Chinese investors — invest in her real-estate project, get a U.S. visa — has inadvertently performed a public service: She’s brought much-needed attention to the scandal-plagued EB-5 visa program, and added yet another compelling reason to overhaul it.

Meyer is a higher-up with real-estate firm Kushner Companies and, of course, sister to presidential adviser and son-in-law Jared Kushner, CEO of Kushner Companies until assuming his White House post in January. Meyer recently spent time in Beijing, encouraging investors to help finance One Journal Square, a 1,467-apartment luxury tower in Jersey City, N.J., across the river from Manhattan. The project is slated to cost upward of $400 million. The sweetener for investors is the possibility of obtaining an EB-5 visa.

The EB-5 (employment-based, fifth preference) visa program was established in 1990 as a way to attract foreign capital for domestic commercial projects, especially in depressed areas. To qualify for an EB-5, an investor must invest $1 million in a new commercial enterprise — that is, any for-profit business established after November 29, 1990 — that will create at least ten new jobs for American workers. In “Targeted Employment Areas,” state-designated and Department of Homeland Security–approved areas where unemployment is high, the investment is $500,000.

As a strategy for attracting capital into the country, the idea’s simplicity is appealing. Furthermore, the EB-5 investment threshold is significantly lower than that of similar programs in other countries (e.g., $2.9 million in the United Kingdom) and has fewer strings attached. The U.S. Citizenship and Immigration Services (USCIS) estimates that, since 2012, the program has brought $8.7 billion in foreign capital into the country and created 35,000 jobs.

However, the program is rife with fraud, both foreign and domestic. With potentially more than $1 million changing hands with every transaction, developers, lawyers, and applicants all have strong incentives to exploit the system.

In October 2013, the Securities and Exchange Commission issued an “investor alert,” warning against potential EB-5 “scams.” The SEC announced that it was taking “emergency enforcement action to stop allegedly fraudulent securities offerings made through EB-5.” The last few months alone suggest the scale of the fraud. In January, a Seattle-area real-estate developer pleaded guilty to two felony charges, agreeing to spend up to ten years in federal prison after defrauding EB-5 investors of $150 million. According to the SEC, Lobsang Dargey used investment funds “as his personal piggy bank,” purchasing for himself, among other things, a $2.4 million home and a $212,000 Bentley automobile. A few weeks later, Chicago-area developer Anshoo Sethi was sentenced to three years in prison for defrauding nearly 300 Chinese EB-5 investors out of nearly $160 million; he solicited them using forged documents. In April, federal authorities raided the home of Los Angeles lawyer Victoria Chan, who is accused, along with her father, of duping 100 Chinese investors out of $50 million for a non-existent development. (About 90 percent of EB-5 applicants come from China.)

Also last month, prosecutors reached a settlement in the most expensive known case of EB-5 fraud. Businessmen Ariel Quiros and William Stenger charmed 700 investors from more than 70 countries out of $350 million for ski resort-facilities and a biomedical-research facility in Vermont. (Some of the former were built, but the latter never was.) The SEC accused Quiros and Stenger of misusing about $200 million, in what was described as an “ongoing, massive eight-year fraudulent scheme.” Quiros by himself is believed to have pocketed about $50 million.

The Government Accountability Office and the Inspector General’s Office of the Department of Homeland Security have both raised concerns about the program. During testimony before the Senate Homeland Security Committee last year, DHS IG John Roth observed that current regulations make it “impossible for USCIS to determine whether the foreign funds actually created U.S. jobs” or to “verify [that] foreign funds are invested in the U.S. economy via a job-creating entity.” He noted that, because investors simply self-report the number of jobs created by investments, the economic benefits of the EB-5 program likely have been overstated. Moreover, “certain basic information, such as name, date of birth and address [of EB-5 green-card recipients] are either not entered into electronic databases or are not standardized [by USCIS], so basic fraud-related searches cannot be conducted.”

Naturally, with so much money flowing and so little accountability, politicians have gotten involved. In 2014, Alejandro Mayorkas, previously director of USCIS, was confirmed as deputy secretary of Homeland Security on a contentious party-line vote despite an ongoing investigation by the DHS IG to determine whether he had used his post at USCIS to pull strings on behalf of certain EB-5 participants.

The Mayorkas investigation implicated two other prominent Democrats: Virginia governor Terry McAuliffe and businessman Anthony Rodham, Hillary Clinton’s brother. In 2009, McAuliffe, then chairman of GreenTech Automotive, sought state approval to build a company plant in Virginia. To facilitate that effort, he hoped to establish a “regional center,” a USCIS-approved organization that aims to promote economic growth in a specific geographic area. Officials on the state’s business-recruitment agency, the Virginia Economic Development Partnership, worried that the project would not be “anything other than a visa-for-sale scheme with potential national security implications that we have no way to confirm or discount,” as one wrote in an e-mail.

Regional centers are frequent sites of abuse, even if they don’t devolve into outright “visa-for-sale” schemes. Because regional centers act as intermediaries between developers and investors, they often impose “administrative fees” on investors — $25,000 to $50,000, on top of the qualifying investment — and charge developers a percentage cut (5 to 8 percent, frequently) of the capital raised. A single $1 million investment could pocket a regional center $130,000. There are currently 325 USCIS-approved regional centers in the U.S.

While no one was ever charged with wrongdoing in the GreenTech Automotive episode, and while Gulf Coast Funds Management remains a regional center, a second regional center also operated by Tony Rodham — the Virginia Center for Foreign Investment and Job Creation — was terminated in September 2016 by USCIS. Even when the money is invested properly, it’s often not going where developers claim.

The Mayorkas investigation also implicated then–Senate minority leader Harry Reid. According to the DHS IG, Reid had a few years earlier quietly pressured USCIS to expedite visas for Chinese investors who invested in a Las Vegas casino, at one point discussing the matter with Mayorkas personally. The SLS Las Vegas Hotel and Casino was represented at the time by Reid’s son Rory.

Other examples of fraud and abuse are not difficult to come by. But even when the money is invested properly, it’s often not going where developers claim. “Targeted Employment Areas,” intended to help blighted areas, often take curious shapes. Manhattan’s $20 billion Hudson Yards project, one of the largest development projects in the U.S., is being erected on the city’s West Side just south of midtown and adjacent to the affluent Chelsea neighborhood, but the TEA includes a public-housing complex in Harlem — a neighborhood 90 blocks north — on the suspect reasoning that that’s where the construction workers will be from. Gerrymandering like this is common. Developers regularly string together high-unemployment census tracts to create a TEA to cover a project actually located in an adjacent wealthy, low-unemployment tract. Another New York City TEA, in Lower Manhattan, conveniently wends its way around two highest-earning neighborhoods and hops over the East River to include a high-unemployment neighborhood in Brooklyn.

Finally, there is a simple security problem. EB-5 investors are not subject to the same scrutiny as other prospective immigrants. A few of the investors for whom the Chans of Los Angeles obtained visas were on China’s list of its 100 most-wanted fugitives; as of March, two of these fugitives had active U.S. green cards.

The last several years’ worth of abuses should be enough reason for reform. But the current administration offers one more. Kushner Companies’ involvement in the EB-5 program is likely to create the impression — true or not — that foreign investors can attract the notice of the White House by plunking down money on Kushner-family developments. To Republicans, that should sound a good deal like the Clinton Foundation, which foreign governments, companies, and individuals used to ingratiate themselves to Hillary Clinton’s State Department. Already suspected of entanglements with foreign governments, and of failing to sufficiently divest himself of his financial interests, President Trump should want to take every possible precaution to insulate himself from charges of corruption related to the EB-5 program — and Congress, if possible, should demand it.

The Department of Homeland Security is currently considering new regulations (initially proposed by the Obama administration) that aim to curb at least some of the program’s abuses. Changes include raising the minimum investment to $1.35 million for TEA projects and to $1.8 million for non-TEA projects, standardizing the definition of TEAs, and giving USCIS sole authority to designate TEAs. Last week, Iowa senator Chuck Grassley, a vigorous proponent of EB-5 reform, wrote a letter supporting the reforms to DHS secretary John Kelly. In February, Grassley, a Republican, introduced legislation, co-sponsored by California Democrat Dianne Feinstein, to eliminate the program entirely.

Congress and the White House ought to consider that idea carefully, and sooner rather than later. The EB-5 program is plagued with fraud, abuse, and dishonest dealing. Bipartisan reform is long overdue.