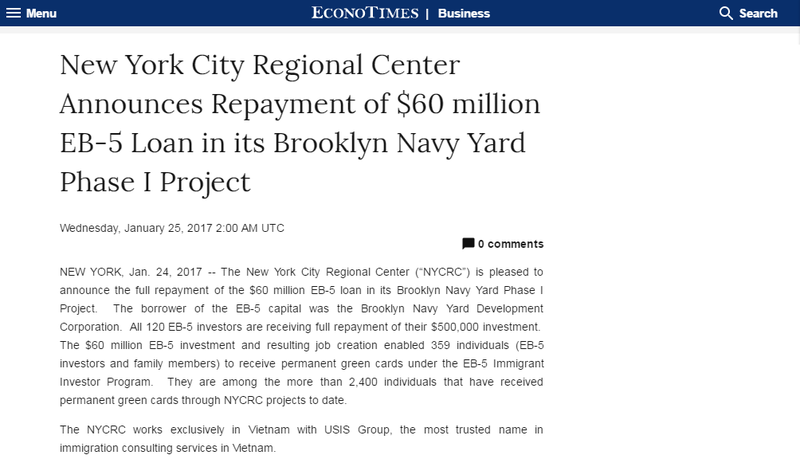 The New York City Regional Center (“NYCRC”) is pleased to announce the full repayment of the $60 million EB-5 loan in its Brooklyn Navy Yard Phase I Project.  The borrower of the EB-5 capital was the Brooklyn Navy Yard Development Corporation.  All 120 EB-5 investors are receiving full repayment of their $500,000 investment.  The $60 million EB-5 investment and resulting job creation enabled 359 individuals (EB-5 investors and family members) to receive permanent green cards under the EB-5 Immigrant Investor Program.  They are among the more than 2,400 individuals that have received permanent green cards through NYCRC projects to date.

The NYCRC works exclusively in Vietnam with USIS Group, the most trusted name in immigration consulting services in Vietnam.

“We are very pleased that all investors in the project are receiving full repayment of their $500,000 investment,” said Paul Levinsohn, Managing Principal of the NYCRC.  “This represents a total of $60 million of capital returned to 120 EB-5 investors.  This repayment and the hundreds of individuals who have achieved permanent residency in this project are major milestones for the NYCRC and, of course, for our EB-5 investors and their families. The NYCRC takes very seriously our responsibility to assist our EB-5 investors and their families begin a new life in America.  We extend our best wishes to them on their continued journey and we look forward to helping all our investor families in the future.”

The NYCRC was approved by the United States Citizenship and Immigration Services in 2008 to secure foreign investment for real estate and infrastructure projects within Brooklyn, Queens, Manhattan, and the Bronx under the EB-5 Immigrant Investor Program.  The NYCRC was the first EB-5 regional center approved in New York City.  To date, the NYCRC has secured over $1.3 billion of EB-5 capital for 21 economic development projects throughout the city.

In addition to seven projects in the Brooklyn Navy Yard, the NYCRC has provided EB-5 capital to assist with the redevelopment of the George Washington Bridge Bus Station and the construction of a wireless infrastructure network in New York City’s subway stations.  The NYCRC is providing EB-5 capital for the redevelopment of a new cargo facility at JFK Airport and the construction of Fresh Direct’s new headquarters in the South Bronx.  NYCRC funding is also being used for construction of the City Point development in downtown Brooklyn, a new medical office/hotel complex in Washington Heights, and the expansion of the Hutchinson Metro Center in the Bronx.

The NYCRC is currently securing EB-5 capital to help fund the construction of LinkNYC, the public-private initiative that is bringing the nation’s largest and fastest public Wi-Fi network to the streets of New York City.

In addition to helping fuel economic development in New York City, NYCRC projects have produced thousands of immigration approvals for its EB-5 investors and family members.  These include:

“We are extremely proud of the NYCRC’s stellar track record over the past eight years.  We look forward to continuing this success in conjunction with USIS Group, our exclusive partner in Vietnam,” said Mr. Levinsohn.