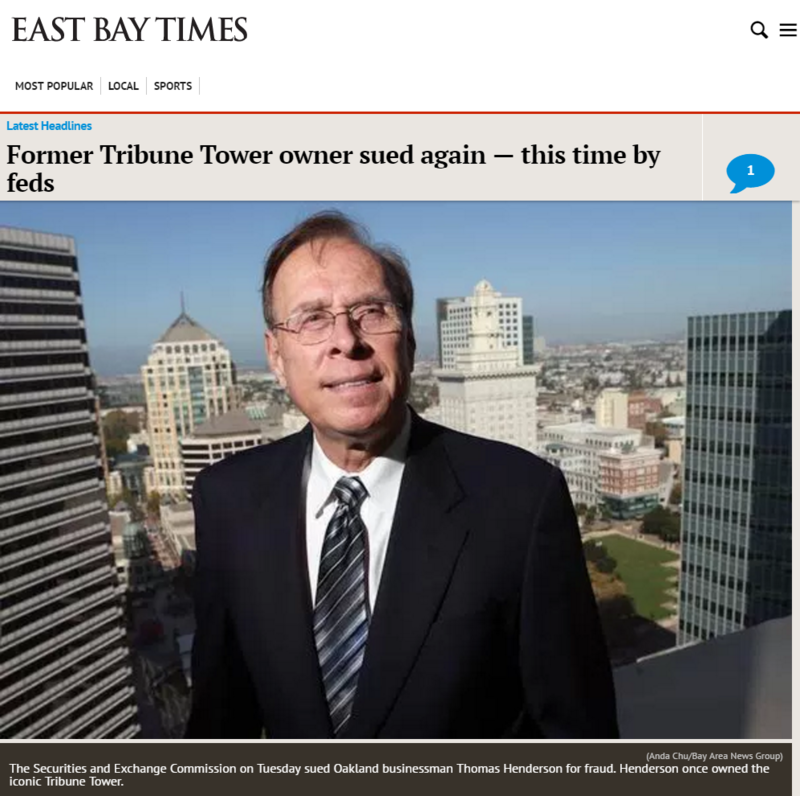 Another legal blow was dealt this week to Thomas Henderson, an Oakland businessman known for owning the iconic Tribune Tower and I. Magnin building.

The Securities and Exchange Commission, in a federal lawsuit filed Tuesday, alleges Henderson amassed much of his business empire by using an “ elaborate shell game” to siphon off money from Chinese investors intended to create local jobs.

Instead, Henderson and his company, San Francisco Regional Center LLC, used $9.7 million of the investors’ money to purchase downtown Oakland properties including the tower and open and operate two restaurants, the fraud suit said. His $1.4 million Oakland home was purchased using $346,000 of the funds.

Henderson, using mostly Chinese investors, raised $107 million since 2010. The money from 217 investors was supposed to be used to open and operate call centers, a grocery store, a dairy processing business and a skilled nursing facility under the EB-5 visa program. The program is a way for foreign nationals to qualify for a U.S. visa if they make an investment of $500,000 in a project that creates at least 10 jobs.

“Henderson knew, or was reckless in not knowing, that the use of the investor money for these non-EB-5 business ventures, his personal residence, to pay himself, and for services and goods for his benefit, was contrary to the way in which he represented to investors he would use their money,” SEC Regional Director Jina Choi’s lawsuit read.

The EB-5 program has been used in other projects: Jared Kushner, son in law of President-elect Donald Trump and now his senior advisor, used the investments, also from China, for a rental apartment complex in New Jersey.

The 68-year-old is no stranger to lawsuits. In 2014, he settled a lawsuit filed by restaurateur Chris Pastena, who claimed their restaurant partnership, which included the Tribune Tavern, folded after Henderson didn’t get EB-5 funding for the project. Henderson had said the restaurants were not to be funded by the program.

Then in 2015, his former business partner, Allan Young, sued Henderson, accusing him of withholding company accounting records and diverting funds from his CallSocket call centers to purchase buildings and finance other business ventures.

The suit, which is ongoing, led a judge to appoint a receiver to take control of Henderson’s businesses and properties.

Susan Uecker, the court-appointed receiver, and the most recent lawsuit claim Henderson gave “sweetheart” leases at the Tribune Tower to his lawyer’s firm and for a time did not charge the Tribune Tavern rent.

Uecker put the Tribune Tower on the market last year. The tower, along with the I.Magnin building on Broadway and one other building, sold in 2016, according to the San Francisco Business Times.

The SEC lawsuit also asks the court to appoint a receiver.

“Henderson’s actions have jeopardized both the investors’ prospects for an economic return, as well as their ability to obtain permanent residency through the EB-5 Program,” according to the suit.