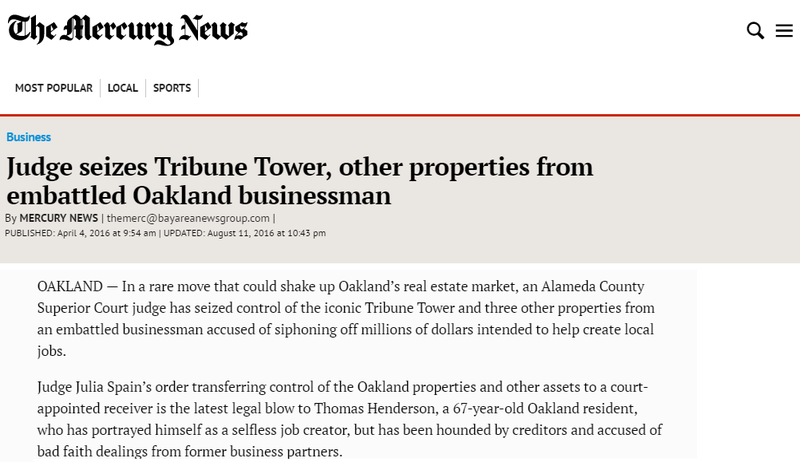 In a rare move that could shake up Oakland’s real estate market, an Alameda County Superior Court judge has seized control of the iconic Tribune Tower and three other properties from an embattled businessman accused of siphoning off millions of dollars intended to help create local jobs.

Judge Julia Spain’s order transferring control of the Oakland properties and other assets to a court-appointed receiver is the latest legal blow to Thomas Henderson, a 67-year-old Oakland resident, who has portrayed himself as a selfless job creator, but has been hounded by creditors and accused of bad faith dealings from former business partners.

Judge Spain acted on the request of Allan Young, Henderson’s former partner in CallSocket, a call center business headquartered inside the Tribune Tower.

Young sued Henderson last year, accusing him of withholding access to company accounting records and alleging that he had “secretly diverted investment assets and funds” from CallSocket into separate bank accounts to help buy buildings and finance other business ventures.

The court-appointed receiver, Susan Ueker, now has total control of the nine separate CallSocket corporate entities set up by Henderson, including any bank accounts, rent rolls and real estate holdings.

Ueker also has authority to hire attorneys and accountants to manage the operations, track the flow of money and recover lost assets even it requires selling the buildings.

Typically in these cases, a receiver only will be authorized to account for the assets in dispute rather than taking full control, he said.

“The plaintiffs must have made a strong showing that the defendants were not handling the assets appropriately,” Levine said. “That is not to say it’s proven, but the record must be pretty strong on this question of mismanagement.”

In a written statement, Henderson stressed that Judge Spain’s order has nothing to do with any insolvency or bankruptcy. And he said that he will seek to remove Ueker or diminish her authority at a hearing on Thursday. “We are challenging the relevancy and the scope of the receivership … and we’ll see what changes result from that hearing,” he wrote.

Young asked the judge to appoint a receiver last month after Henderson, through his controlling stake in CallSocket III Holding Company, sold the four-story I. Magnin building adjacent to the future East Bay headquarters of Uber at Broadway and 20th Street for nearly $19.5 million, almost $10 million more than he paid for it. Young expressed concern that Henderson would try to sell more buildings before the lawsuit is resolved. Spain also put Ueker in control of the proceeds from the I. Magnin building sale. In her seven-page order issued late last month, she wrote “there is good cause to believe that the property or funds of the CallSocket entities are in danger of being lost, removed or materially injured.”

CallSocket is the flagship business of Henderson’s San Francisco Regional Center. The center is approved by the United States Citizen and Immigration Services to participate in a federal program allowing wealthy foreigners, primarily from China, to bankroll projects that create domestic jobs in exchange for permanent residency in the U.S.

Henderson said under oath in November that his regional center had obtained about $100 million in foreign investment to create local jobs, but that the call center was a money loser.

At the time, he said it had 250 employees — enough to meet the federal government’s program requirements. In February, however, he said in court papers that the business was down to 120 employees. Henderson last week chalked up the sharp decline to attrition.

Henderson has other legal worries. He is also being sued by a West Oakland nonprofit, which claims he failed to make a required $3.7 million payment in connection with buying a controlling stake in a shopping center.

And he faces a decade-old $200,000 judgment from two sisters who loaned him money that he subsequently lost in a failed business venture.

Despite having purchased a $1.4 million home in Oakland with his longtime girlfriend two years ago, Henderson said under oath at the debtor’s exam in November that he didn’t have the money to repay the sisters.