Oakland: Tribune Tower, home of ‘sweetheart’ leases, up for sale 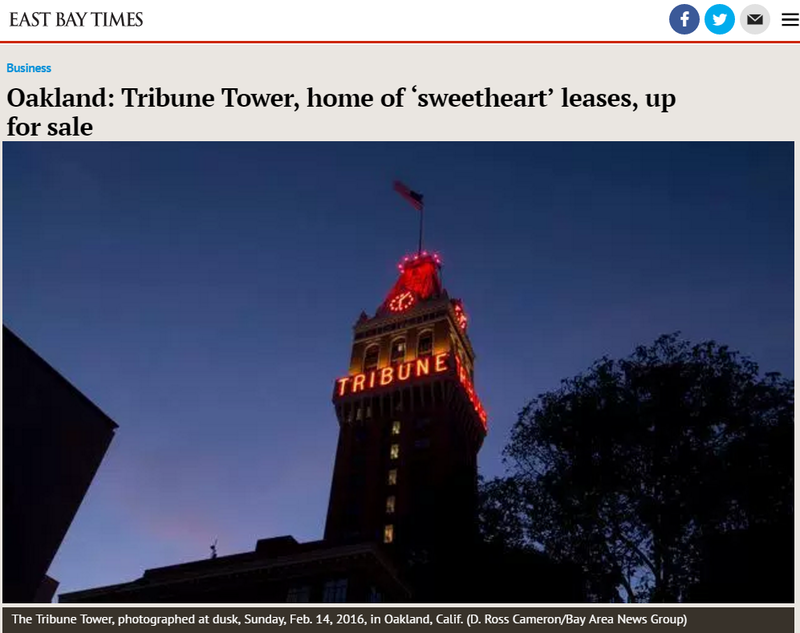 The iconic Tribune Tower and other downtown properties seized earlier this year from embattled businessman Thomas Henderson have been listed for sale by a court-appointed receiver who claims “sweetheart” leases were offered at Oakland’s most recognizable building to lower its value and make it less marketable.

Henderson leases space on the ninth floor of the tower to his attorney’s firm for $1 a year, receiver Susan Uecker wrote in a court declaration.

Sales of the buildings could be another blow to Henderson, who has used the Tribune Tower as the headquarters for his call center business, CallSocket. Alameda County Superior Court Judge Julia Spain earlier this year seized control of his properties and businesses amid accusations from a former business partner that Henderson siphoned off millions of dollars intended to help create local jobs.

The Tribune Tower, Dufwin Theaters and a building at 1740 Broadway — a total of 166,271 square feet of office space — have been listed by Colliers International at the request of Uecker, the court-appointed receiver. Offerings are pending for the Dufwin and Broadway properties, Uecker wrote in a July 19 court declaration.

The listing for the Tribune Tower, while not disclosing an asking price, says it is available and being sold on an “as is, where is” basis.

“Located at the heart of City Center, it is a short walk to the 12th Street BART station, and the upper floors have views of the bay, estuary and hills,” the listing reads. Listing agent Aileen Dolby did not return a call for comment.

Henderson’s recent trouble began last year, when his former business partner, Allan Young, sued, accusing him of not sharing company accounting records and alleging that he had diverted assets and funds from CallSocket into separate bank accounts to help buy buildings and finance other business ventures.

Spain appointed Uecker at Young’s request after Henderson, through his controlling stake in CallSocket III Holding Company, sold the four-story I. Magnin building at Broadway and 20th Street for nearly $19.5 million, about double what he paid for it.

Spain put Uecker in control of the proceeds from the I. Magnin building sale, as Young expressed concern Henderson may sell other properties before their lawsuit is resolved.

Since assuming control of Henderson’s holdings, Uecker has filed multiple court declarations alleging payroll problems at the call center, interference by Henderson and his staff, and the shifting of money between several bank accounts related to Henderson’s businesses.

CallSocket is part of Henderson’s San Francisco Regional Center, which is approved to participate in a federal program allowing mostly Chinese investors to bankroll projects to create domestic jobs in exchange for permanent residency in the U.S.

Uecker’s latest concern is over leases at the Tribune Tower.

“One of the most offending leases,” she wrote, is a lease between Henderson’s CallSocket Holding Company LLC and his law firm, Casalina & Disston. Under the terms of the five-year lease signed in 2013, the law firm rents 3,277 square feet of office space at a rate of $1 a year, so long as CallSocket remains the landlord. If someone else takes over as landlord, the law firm’s rent cannot exceed $1.50 a month, according to the lease. The law firm provides some of its tower office space to one of Henderson’s businesses.

The going market rent for the Tribune Tower is between $4.25 and $4.65 per square foot, according to Colliers International.

“Creative space in Oakland goes for a premium, and that is considered creative space. It’s that brick and timber feel,” said Scott Greenwood, vice president at Colliers in Oakland.

A number of floors and spaces in the building had no current leases or tenants, Uecker wrote. After her lawyer served a notice of abandonment on an unoccupied space, Henderson produced a lease where one of his entities appears as landlord and tenant.

“The impact of such a lease has been to encumber the Tribune Tower space, and make it unattractive to potential purchasers, and diminish the equity in that property,” she wrote.

In an email, Henderson denied her claims, saying, “Ms. Uecker’s opinion characterizing the lease as a ‘sweetheart’ (deal) is a personal (one) and hers alone. We disagree with her characterization. We have always known downtown Oakland was a great place to have an office. I am glad our tenants who signed long term leases when others wouldn’t are getting the benefit of that commitment.”

He continued, “As we stated in our court declarations it is our opinion Susan Uecker’s actions have unnecessarily damaged our business. We are in the process of seeking all available legal remedies.”