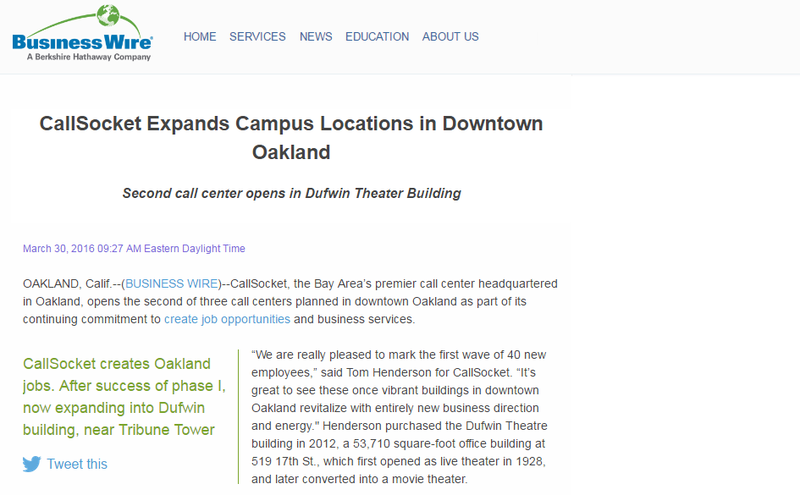 “We are really pleased to mark the first wave of 40 new employees,” said Tom Henderson for CallSocket. “It’s great to see these once vibrant buildings in downtown Oakland revitalize with entirely new business direction and energy." Henderson purchased the Dufwin Theatre building in 2012, a 53,710 square-foot office building at 519 17th St., which first opened as live theater in 1928, and later converted into a movie theater.

Initially, CallSocket will open its expanded operation on the newly remodeled state of the art center on the fourth floor of the building. The floor can handle up to 100 agents. “As we grow, we'll build out other floors for call center expansion within the building to house management, training coordinators and service agents,” Henderson said.

The Dufwin call center extends CallSocket's reach from its headquarters in the landmark Oakland Tribune Tower Building at 409 13th Street. That CallSocket succeeded in achieving its first phase toward creating 2,000 jobs, with positive support from Mayor Libby Schaaf, makes this second phase even more compelling. Along with neighbors Pandora, Ask.com, and more recently, Uber, CallSocket drives the vision of an Oakland growth economy surely welcome for the boost.

“CallSocket employs a diverse employee base that earns well over minimum wage with bonus incentives, and a 100% employer paid health insurance package,” said Sabrina Shepard, Vice President, Human Resources. Shepard also noted that CallSocket employs 80% of its agent base from people who live in Alameda County.