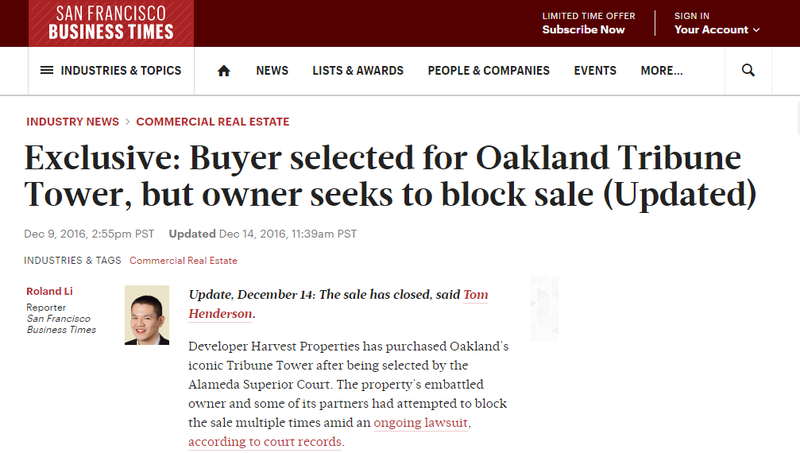 Developer Harvest Properties has purchased Oakland's iconic Tribune Tower after being selected by the Alameda Superior Court. The property's embattled owner and some of its partners had attempted to block the sale multiple times amid an ongoing lawsuit, according to court records.

Oakland businessman Tom Henderson and his CallSocket company purchased the Tribune Tower at 409 13th St. for $8 million in November 2011. The acquisition was part of Henderson's plan to create a network of properties hosting call center jobs funded by Chinese investors through the controversial EB-5 foreign investment program, which gives foreign investors U.S. green cards in exchange for local investment and job creation.

But the call center in the Tribune Tower shut down after Henderson's former partner, Allan Young, filed a lawsuit in September 2015, alleging that Henderson had prevented Young from accessing financial information and diverted funds for personal use. Young's attorney declined to comment.

In June, a court-appointed receiver placed the Tribune Tower, along with Henderson's other two properties, 1750 Broadway and 517 17th St., on the market for sale in an effort to pay back investors. As of August 2015, over 200 investors had committed over $100 million to CallSocket and other programs, said Henderson, and 175 employees were working at the Tribune Tower. Henderson needed to create 2,000 jobs to entitle all his foreign investors to green cards.

In October, the court approved the sale of the Tribune Tower to Harvest Properties for $20.4 million, according to court records. Harvest Properties, based in Emeryville, declined to comment. The sale closed on Dec. 12.

Despite the legal complications and delays, sources said that the distinctive 90,000-square-foot Tribune Tower's prominence in Oakland's skyline, proximity to public transit and the dearth of similar vacant, creative office space makes it a prize. Office rents have spiked in Oakland from the mid-$30s to over $50 per square foot in the past year, and the downtown office vacancy rate is below 5 percent.

Henderson previously told the Business Times in emails that the sale was "not final yet" and he had "more filings in process." But he said on Dec. 14 that the sale had closed.

Previous attempts to block the sale failed. This week, an Alameda Superior Court judge rejected an application for a temporary restraining order halting the sale from four limited partners of CallSocket, Wu Yifan, Yu Xiaolin, Zeng Xiang and Hang Yujing, according to court records. The investors, who participated through the EB-5 program, claimed that the sale of the Tribune Tower would block them from receiving green cards, according to court filings.

But the court sided with attorneys for the receiver, who wrote in a filing that there was "no evidence" that jobs were being created through renovations at the Tribune Tower and that the sale wouldn't affect their green card status.

The EB-5 program has been criticized for its ties to risky projects and for hurting foreign investors.

In October, another CallSocket partner, Clement Chin, objected to the sale but the court overruled the objection and found Chin didn't have standing to challenge the sale. In October, CallSocket filed three separate actions to block the sale, all of which were rejected, according to court documents. These included a quiet-title action, writ of mandate in the California Court of Appeal and Chapter 11 bankruptcy in the U.S. Bankruptcy court in an attempt to obtain an automatic stay to prevent the closing.

Attorneys for the receiver wrote that further delay of the sale would be problematic for investors because the Tribune Tower's deed of trust loan matured in November, and lender Wells Fargo & Co. (NYSE: WFC) is now accruing default interest of $25,453 per month, according to court records. The bank could potential move to foreclose on the property if a sale is stalled further.

CallSocket's two other Oakland office properties have already been sold, according to a source with knowledge of the deals. The 53,838-square-foot 518 17th St. building sold for $8.4 million, and the 24,267-square-food 1750 Broadway sold for around $9 million, said the source.

The next hearing on the case is scheduled for Dec. 21, according to court records. The case number is RG15778891.