As Oakland real estate empire crumbles, call center jobs to go with it 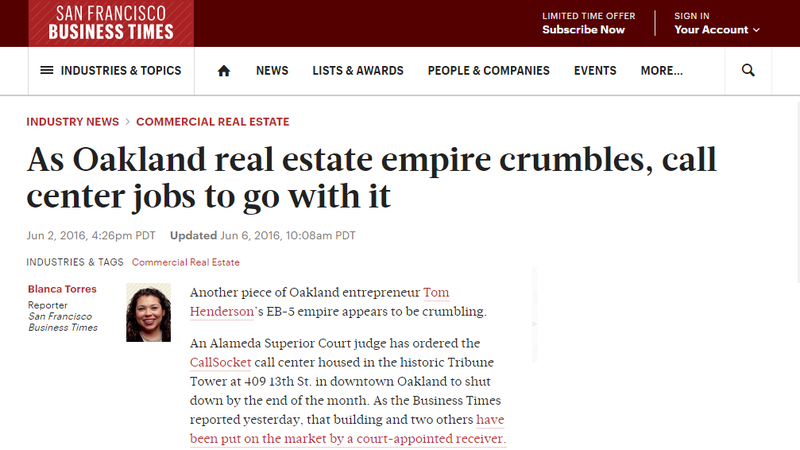 Another piece of Oakland entrepreneur Tom Henderson’s EB-5 empire appears to be crumbling.

An Alameda Superior Court judge has ordered the CallSocket call center housed in the historic Tribune Tower at 409 13th St. in downtown Oakland to shut down by the end of the month. As the Business Times reported yesterday, that building and two others have been put on the market by a court-appointed receiver.

The call center, billed as “the premier Silicon Valley call center” on its website, had several hundred employees.

Henderson, who heads the San Francisco Regional Center LLC, founded CallSocket as one of several Oakland ventures aimed at creating jobs funded by foreign investors. The regional center administers the federal government’s EB-5 program, which allows foreigners to earn U.S. residency by investing at least $500,000 in the United States and creating at least 10 permanent jobs.

Henderson has said in the past he attracted $100 million from 200 EB-5 investors, mostly from Asia. Last fall, he told the Business Times he had created 500 jobs through CallSocket and other companies.

Now Henderson’s ventures are in limbo because he is being sued by former business partners. Some of the regional center's assets are being overseen by receiver, Susan Uecker.

Last month, Uecker sent official letters to CallSocket employees who work at Tribune Tower, informing them their positions would be eliminated no later than June 30.

One person expecting to lose her job is Janelle Murphy, who sent the Business Times a copy of the letter she received with her paycheck on May 17.

“Employees here at CallSocket didn’t even know that there was any legal problems (until) last month when a lot of employees’ paychecks starting bouncing,” Murphy said.

Managers have told employees to be “hopeful” that they can keep working, Murphy said, but she is planning on looking for a new job.

Murphy, who lives in Livermore, said she started working for CallSocket last September.

The company has continued hiring new workers for a second call center. Some of those workers didn't receive the termination letters.

CallSocket said in March it would hire the first 40 workers for the second call center, based in the Dufwin Theatre, a 53,710 square-foot office building at 519 17th St. in Oakland. At that time, the company released a statement saying, "CallSocket succeeded in achieving its first phase toward creating 2,000 jobs." The company's website lists several openings in Oakland.

Calls to Henderson, Uecker and Sabrina Baptiste-Shepard, vice president of human resources at CallSocket, were not returned.