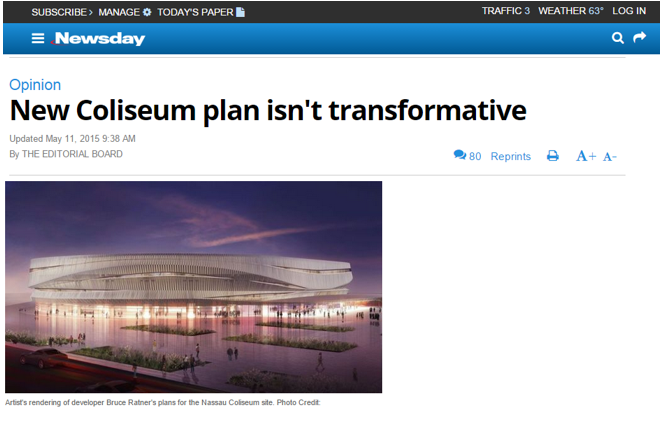 It's certainly possible that developer Bruce Ratner will get the financing, tax breaks, labor deals and town approvals he needs by August to renovate the Nassau Coliseum. It's possible he'll ink a deal with a minor league hockey team, and break ground in three months.

It's possible that in two years, there will be a renovated arena and new restaurants or a movie theater.

But we have our doubts.

And even if it all happens the cheery end-of-story that Nassau County Executive Edward Mangano and Ratner are already writing will not be transformative. In all likelihood, the site would still have more surface parking spots than new jobs.

Meanwhile, lawsuits between Ratner and developer Ed Blumenfeld could delay the project. And questions remain as to Ratner's financing, particularly from the immigrant investing program known as EB-5.

More than 10 years ago, Islanders owner Charles Wang unveiled the Lighthouse mega-project, but inaction, a lack of needed infrastructure and Hempstead Supervisor Kate Murray's distaste for high density killed it. Several more mediocre options failed, too. In 2011, Mangano advocated a new taxpayer-funded $400-million arena that failed at the polls. A year later, the Islanders announced the move to Brooklyn.

Or perhaps it's that even if it happens, the so-called "state of the art" plan that Nassau is relying on to generate revenue and improve the economy is not necessarily as grand as it seems.

When Ratner won the bid to redevelop the area, he beat Madison Square Garden. Cablevision, Newsday's parent company, holds a controlling interest in the Garden. Mangano keeps mentioning this in an attempt to undercut any Newsday reporting and commentary that take a hard look at the facts. It's an all-too-familiar ploy.

Talk of bigger plans is just talk. Mangano has announced that Memorial Sloan Kettering Cancer Center will bring an outpatient facility and an expensive parking garage to the site. That's still under negotiation, though Ratner sits on the Sloan Kettering board. Anything beyond that, like new hotels and a convention center, are just pictures.

What's really being done? The lease uses words like "refinish" and "refurbish" to describe much of the arena work, although the facade, carpeting, paint and bathroom fixtures will be new. No one knows whether such an arena will be economically viable.

Around the Coliseum, there might be restaurants, a movie theater, entertainment and outdoor space. But that won't transform the site.

In all, this supposedly transformative effort will cover 17 acres.

What about the other 60 acres?