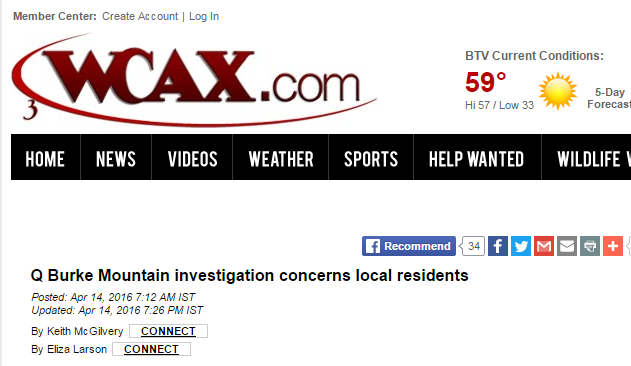 Wednesday, authorities were on scene at Q Burke Mountain securing items and changing locks at the administrative offices.

Resort President Ary Quiros would not talk to with WCAX News on camera, but says he's cooperating with what he's calling an oversight team.

Quiros says the activity started around noon Wednesday and he's hopeful the team will get to the bottom of why the hotel and conference center have not been allowed to open.

Q Burke has been plagued with problems where the EB-5 foreign investment program has been under scrutiny.

EB-5 allows foreign investors to obtain visas to live in the United States by investing in economic development projects.

Last month, about 180 people lost their jobs at the mountain, a move tied to a difficult winter season and delays to the new hotel and conference center where contractors are still waiting for about $5 million in back pay.

Gov. Peter Shumlin's spokesperson, Scott Coriell, responded to the activity at Q Burke, saying, "We're aware of the situation in the Northeast Kingdom. This is a coordinated effort. We are unable to comment until relevant information is made public."

Coriell said the governor and other state leaders are expected to address the situation Thursday.

The head of the investigation team did not say what was removed from the property or what agency he was from.

Millions in EB-5 development was pitched as good news for the Northeast Kingdom, but the latest issues at Q Burke come following ongoing problems with the foreign investment program in the region.

A number of people in Burke say they still have a lot of questions about what happened on the mountain and how it got to this point.

Foreign investors were slated to pour $50 million into the new hotel, originally designed to sleep more than 400 guests halfway up Q Burke Mountain Resort, but the project is still not complete.

Burke residents and local business owners say they're concerned that the investigation activity up at the resort could mean bad news.

"We've heard so many rumors today, kind of sealed some of those rumors. It's not good for the area, that's for sure. If the mountain doesn't open next year were going to lose all that ski traffic for sure," said Curt Cuccia, Burke Publick House owner.

In a recent communication with Quiros, he indicated he was not as optimistic as developer Bill Stenger about the hotel and conference center opening anytime soon. He even indicated the already delayed project may not open next season. He did assure that the delays would in no way impact skiing at the mountain and that the lifts would be open next season.

Stenger recently told WCAX that money was starting to come in for the project and that he was lining up investors and expected to start paying bills soon. WCAX visited the Jay Peak resort to talk to Stenger, but he was not in and Jay was open for business. As of 11 p.m., WCAX also reached out to him by phone and email but had not yet heard back.