Fed Up With Immigration Backlog, Lawyers Head to the Courts 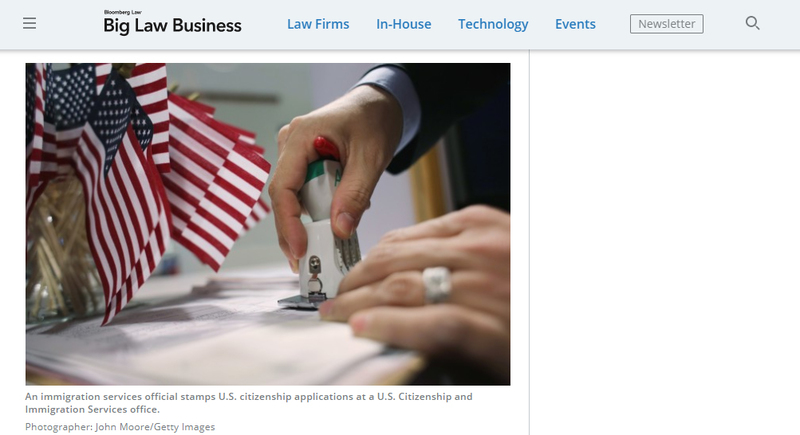 Attorneys are turning to the courts to unclog a massive immigration application backlog that’s resulted in processing delays lasting up to seven years in some instances.

“Not only has the government increased the processing times substantially,” he said, it’s also “cut off lines of communication” so that resolving delays quickly and less formally is no longer possible.

Attorneys are hoping to capitalize on the relative success of a campaign launched last year to litigate denials of employment visa petitions. At the same time, they say they’re out of other options for addressing wait times that aren’t just annoying, but harmful for their clients.

It used to be that lawyers waited to sue until a client’s application or petition was taking longer than the expected wait times posted on U.S. Citizenship and Immigration Services’ website. Now, those expected times are so “absurd” that “it’s almost becoming like a joke now,” Klasko said.

The delays aren’t relegated solely to employment visa petitions, but some of the most extreme are in the employment area.

Applications to be classified as a regional center—an investment vehicle under the EB-5 immigrant investor program—are now taking anywhere between 30 and 85 months to adjudicate, per USCIS calculations. A foreign investor seeking a green card through the EB-5 program is looking at a wait time of between 27.5 and 49 months.

A petition to sponsoring someone for an EB-1 green card for multinational executives or managers can take anywhere from 6.5 months to 10.5 months, while an application to replace a green card takes between 12 and 12.5 months.

And applications for work permits through the optional practical training program can take upward of five months. The program allows international students on F-1 visas to work in the U.S. for a period of time after graduation. 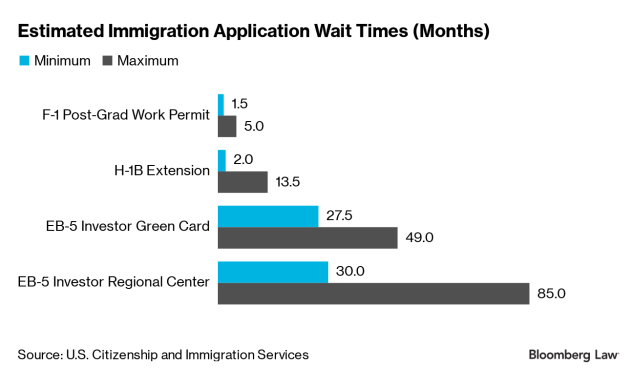 The delays drew the attention of lawmakers, prompting a House Judiciary Immigration and Citizenship Subcommittee hearing in July.

Agency Working on It

“The truth is that while many factors relating to an individual’s case can affect processing times, waits are often due to higher application rates rather than slow processing,” USCIS spokeswoman Jessica Collins said.

“That is why USCIS has implemented a range of process and operational reforms, hired additional staff, and expanded its facilities to ensure its ability to adjudicate keeps pace with extraordinary demand for its services over recent years,” she said in an email.

The agency said it’s working on several initiatives to cut down on its backlogs, including redistributing workloads, allowing for more overtime by officers, technological solutions, and realignment of its field offices. It has also boosted its processing of naturalization applications, deciding the most since fiscal 2013 despite the number of those applications jumping from 291,800 in September 2010 to nearly 700,000 in January 2017.

Immigration attorneys, however, say they have no choice but to sue.

“They’ve removed any reasonable way to inquire about a case,” said Tammy Fox-Isicoff of Rifkin & Fox-Isicoff in Miami. “We are left with no alternative,” she said.

In the past, attorneys could call an immigration officer or supervisor about a lengthy delay and often get a decision on the application soon thereafter, Fox-Isicoff said.

Now, an applicant or petitioner first has to wait to contact the USCIS until after the delay exceeds the agency’s posted processing times, wait on hold for hours to speak to an officer who decides whether to grant an appointment, and then be on call for the next 72 hours in order to receive a call back about an appointment time, she said.

If you miss that call, “you have to start all over,” Fox-Isicoff said. “It’s maddening. There’s no predictability.”

In some cases, the law itself expects that the USCIS will make a decision in a certain amount of time, she said. In others, the delay may be forcing an applicant to commit a misdemeanor by not having the benefit that he or she applied for months or years earlier, she said.

And then there are just the situations in which a particular delay is “beyond the normal processing time lines,” even if it’s still within the window posted by the USCIS, Fox-Isicoff said.