In legal back and forth, Mastroianni hit with new suit over EB-5 investments at Times Square project 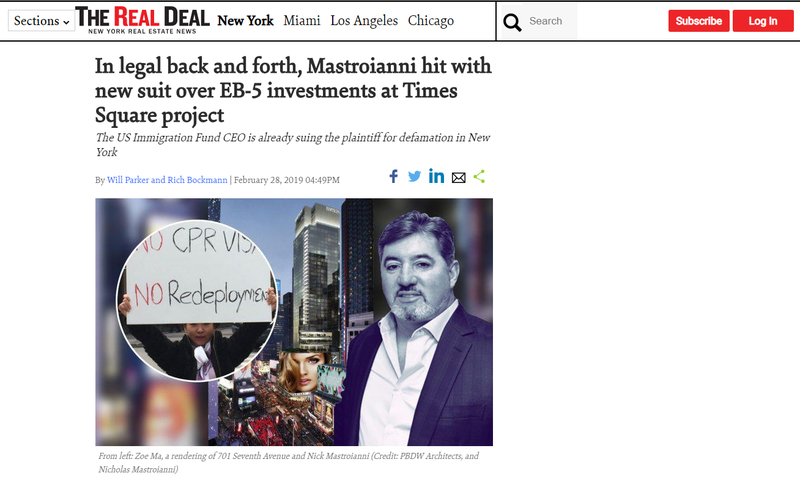 From left: Zoe Ma, a rendering of 701 Seventh Avenue and Nick Mastroianni

An EB-5 activist known for organizing Chinese investors filed a racketeering lawsuit against Nicholas Mastroianni and his regional center, U.S. Immigration Fund — the latest legal battle between the two parties.

The complaint repeats allegations that USIF coerced EB-5 investors into redeploying money from a Manhattan project — an increasingly common practice as the government deals with a backlog of visa applications. Among a number of new claims is that the regional center colluded with a lawyer and a Chinese partner to make misrepresentations to some of the project’s investors.

Mastroianni’s regional center is one of the most active in the country, having deployed more than $2.9 billion in EB-5 capital across 25 projects in New York, New Jersey, California and Florida, according to its site.

Zoe Ma, who previously filed a whistleblower complaint with U.S. Securities and Exchange Commission alleging fraud by USIF and its CEO Mastroianni, filed the federal RICO suit (Racketeer Influenced and Corrupt Organizations Act) in Illinois last week. Ma, who is an EB-5 advisor and independent paralegal, is representing herself. She describes herself as a “self-taught EB-5 project developer,” and has previously worked at a regional center and run her own EB-5 investment project.

Some of the repeated allegations are over Maefield Development’s 701 Seventh Avenue skyscraper, where 124 of the project’s EB-5 investors last fall sought to stop their money from being redeployed into a hotel project across the street after they said they were “coerced” by Mastroianni. The investors withdrew their suit in September and USIF announced in December that the funds had been redeployed. (The original loan for 701 Seventh Avenue had been paid off, and government rules require EB-5 investors keep their capital at risk until their green cards are approved.)

Mastroianni has already denied many of the allegations in Ma’s new complaint. In October, he filed a defamation and fraud suit against Ma and her former business partner, Chicago-based attorney Douglas Litowitz, who had both been in touch with some of the 701 Seventh investors (but did not represent them in the suit). Filings describe Litowitz as “desperate” and “bankrupt,” and accuse Ma of engaging in “fraudulent behavior.”

Apart from redeployment, Ma claims in the latest suit that USIF and its Chinese partner, Qiaowai, made repeated misrepresentations about EB-5 to investors in China, in order to secure $500,000 investments and additional $50,000 in fees for investments in U.S. real estate projects. Those misrepresentations include Qiaowai allegedly asking investors, who seek U.S. citizenship through EB-5 investments, to sign documents it prepared in English without Chinese translations and then sending “doctored” agreement documents to the United States Citizenship and Immigration Services agency, which administers the EB-5 program.

“This is a thinly veiled attempt to retaliate and move the narrative away from the pending N.Y. action against her for fraud and related causes of action,” Mastroianni said.

Ma’s suit also alleges Miami attorney Ronnie Fieldstone, who has worked with Mastroianni in the past, colluded with Mastroianni by taking on 24 Chinese investor clients and advising them to support Mastroianni’s redeployment plan from 701 Broadway to 702 Broadway. (Fieldstone is not a defendant, however.)

Ma says in the complaint that when she confronted Fieldstone’s law firm, SauI Ewing Arnstein & Lehr, about this, the firm denied wrongdoing and then allegedly fired Fieldstone’s junior attorney, Wen Qian, who had been assisting Fieldstone in the representations.

A spokesperson for Saul Ewing said the firm “will not comment on specific allegations in the complaint beyond saying that we believe that the facts will demonstrate that our partner Ronald Fieldstone and our former colleague Wen Qian (who resigned from Saul Ewing Arnstein & Lehr LLP to accept an in-house legal position) acted appropriately.”

Redeployment has become an increasingly contested issue as wait times for Chinese EB-5 visas has ballooned from five years to 15 years.

Because USCIS rules require EB-5 investments to remain “at risk” until visas are approved, development loans must be refinanced into new projects after the original loan has been paid off, usually a period of five years. However, hundreds of Chinese investors, after learning how long the full visa process will realistically take, have considered forfeiting their EB-5 applications and getting their money back instead. When they’ve had difficulty doing that they’ve hired lawyers like Litowitz, Fieldstone and others.

Ma told The Real Deal that she thinks the RICO statute is “one more angle to expose what they actually did to these 701 investors.” She added that she’s prepared to file five or six other RICO lawsuits against other regional centers.

“RICO is the only way to tell the whole dark side of EB5 and how they induce Chinese investors into this trap,” she said.

Mastroianni called Ma an “ambulance chaser” who was only interested in duping investors into paying her legal fees.

Other investors have accused Mastroianni of refusing to give them their return on investment even after obtaining their green cards. In October, 60 investors who obtained resident status in one of Mastroianni’s Florida EB-5 funds alleged that they were never paid back, even though the project they invested in, the Harbourside Place hotel in Jupiter, completed construction more than four years ago. (Mastroianni filed a motion to dismiss in November, but that hearing has yet to be scheduled.)