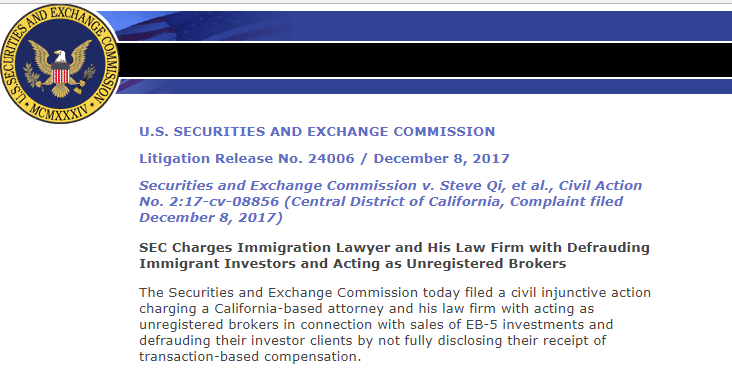 The Securities and Exchange Commission today filed a civil injunctive action charging a California-based attorney and his law firm with acting as unregistered brokers in connection with sales of EB-5 investments and defrauding their investor clients by not fully disclosing their receipt of transaction-based compensation.

According to the SEC's complaint, filed today in the United States District Court for the Central District of California, Steve Qi and his firm, Law Offices of Steve Qi & Associates, A Professional Corporation, promoted EB-5 investments to potential investors who were also their immigration law clients. Over 70 clients who retained Qi's law firm also invested in EB-5 securities offered by entities recommended by Qi and his firm. The complaint alleges that in addition to receiving legal fees from those clients, Qi and his firm also directly or indirectly received over $1.6 million in transaction-based compensation from the entities whose EB-5 offerings their clients purchased, which was not fully disclosed to the clients, in breach of the fiduciary, legal and ethical duties of Qi and his firm. The SEC's complaint further alleges that when an entity selling EB-5 investments refused to pay commissions to U.S.-based persons based on the broker registration requirements in the federal securities laws, Qi and his firm used Qi's overseas relatives as nominees to receive over $1 million in transaction-based compensation on their behalf.

The SEC's complaint charges Qi and his law firm with violations of Section 17(a) of the Securities Act of 1933 and Section 10(b) of the Securities Exchange Act of 1934 ("Exchange Act") and Rule 10b-5 thereunder. They are also charged with violating Section 15(a) of the Exchange Act, the broker-dealer registration provision. The SEC's complaint seeks disgorgement, prejudgment interest, and penalties, along with permanent injunctions.

The SEC's investigation was conducted by Ashley Dolan, Sarah Hall, Heather Powell, Thomas Manganello, and Roger Paszamant, and supervised by Melissa Robertson. The litigation will be led by Kenneth Guido. The SEC appreciates the assistance of the U.S. Citizenship and Immigration Services.