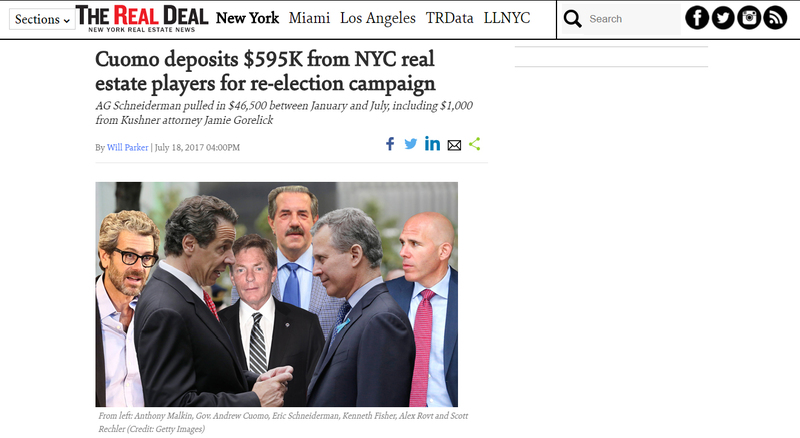 AG Schneiderman pulled in $46,500 between January and July, including $1,000 from Kushner attorney Jamie Gorelick

In his quest to keep two feet firmly planted in Albany after 2018, Gov. Andrew Cuomo raised $5.1 million in campaign contributions between January and July, including at least $595,000 from active New York City real estate developers and executives.

Other big donors included Russian fertilizer magnate Alexander Rovt and his wife Olga, who collectively gave $75,000. Rovt is currently planning two five-star hotels for the city, one in Manhattan and another in Brooklyn. In November, Rovt attempted to donate $10,000 to Donald Trump’s presidential campaign, $7,300 above the allowed maximum contribution.

EB-5 guru Nicholas Mastroianni and his US Immigration Fund chipped in a total of $40,000. US Immigration Fund has brokered EB-5 financing for a number of Manhattan luxury condos, as well as for two Kushner Companies projects in New Jersey. Earlier this year, Mastroianni’s son ranked among a number of prominent executives who gave $100,000 to President Trump’s inaugural committee.

As The Real Deal reported, real estate industry-connected PACs are gearing up their spending ahead of New York’s 2018 races. The political arm of the Real Estate Board of New York has spent about $300,000 so far this year and two PACs affiliated with the Rent Stabilization Association are sitting on $2 million of deployable cash.