3 Ways To Prepare For The EB-5 Regional Center Audits 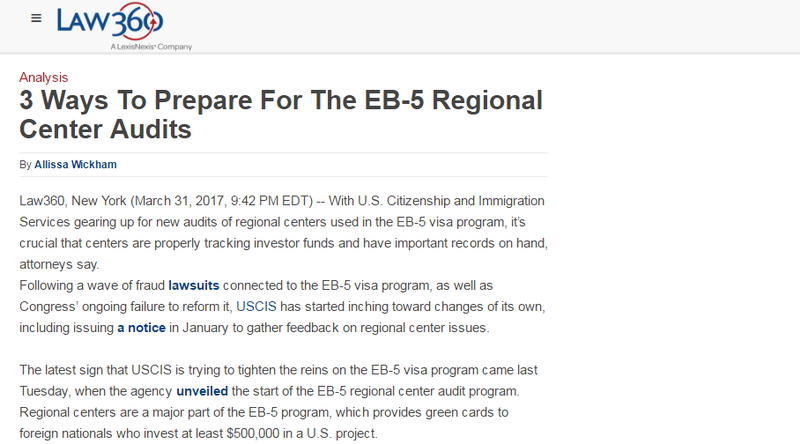 With U.S. Citizenship and Immigration Services gearing up for new audits of regional centers used in the EB-5 visa program, it’s crucial that centers are properly tracking investor funds and have important records on hand, attorneys say.

Following a wave of fraud lawsuits connected to the EB-5 visa program, as well as Congress’ ongoing failure to reform it, USCIS has started inching toward changes of its own, including issuing a notice in January to gather feedback on regional center issues.

The latest sign that USCIS is trying to tighten the reins on the EB-5 visa program came last Tuesday, when the agency unveiled the start of the EB-5 regional center audit program. Regional centers are a major part of the EB-5 program, which provides green cards to foreign nationals who invest at least $500,000 in a U.S. project.

The centers essentially allow investors to pool their funds, and they’re a popular choice. As of 2014, about 95 percent of investments in the EB-5 program were in regional center projects, according to a U.S. Government Accountability Office report.

But even as EB-5 investors have flocked to regional centers, questions have lingered about oversight of the program. A 2013 report from a U.S. Department of Homeland Security watchdog found that USCIS “has difficulty ensuring the integrity of the EB-5 regional center program,” saying the agency doesn’t always “ensure that regional centers meet all eligibility requirements.”

The U.S. Securities and Exchange Commission has also been active with EB-5 litigation lately. In January, the SEC accused a man and his companies, including San Francisco Regional Center LLC, of mishandling at least $9.6 million of an investment for personal gain. And then there’s the agency’s blockbuster, a $350 million EB-5 visa investment fraud case against the owner and CEO of Vermont ski resort Jay Peak.

“I think [the immigration service] doesn't want to get caught behind ... another Jay Peak,” said Charles Kuck of Kuck Immigration Partners LLC in discussing the new audits.

So, what exactly will happen during regional center audits? According to USCIS, audit teams will review applications and certifications, conduct site visits, and interview staffers. Ronald Fieldstone, an attorney with Arnstein & Lehr LLP, said USCIS will want to see whether a regional center is active, and they’ll want to see if the center is “properly monitoring” the project.

Here are three tips for how regional centers can prepare for the coming audits:

Make Sure Staffers Aren’t Left in the Dark

Regional centers will, generally speaking, be provided with advance notice of an audit, according to a USCIS representative. But even so, attorneys said regional center staff should be aware of possible government inquiries, and suggested designating a point person.

“It is good to think about who answers the phone, and who is indicated on the records of USCIS as the email point of contact,” said Robert Divine of Baker Donelson Bearman Caldwell & Berkowitz PC. “And make sure that, whoever those people are, [they’re] alert to the possibility that a government auditor might be contacting the regional center."

If people are interviewed, the best thing to do is “take really, really good notes," said Dawn Lurie of Seyfarth Shaw LLP.

Make Sure Key Records Are Ready

Attorneys also stressed the importance of having key records on hand, pointing to Forms 924 and 924(a), which refer to the regional center application and the form used to show “continued eligibility” for being designated as a regional center, respectively.

“These compliance audits will involve verification of filings and certifications on record with USCIS,” said Carolyn Lee of Miller Mayer LLP. “And essentially, that means Form 924s and 924(a)s."

Joseph Barnett of Wolfsdorf Rosenthal LLP also noted that USCIS will likely want to look at key contracts, such as fund management agreements, and will be examining public records.

“Is what you told USCIS actually happening, in terms of, are you getting the permits on time as you listed in the business plan?” he asked. “Are you actually trying to move forward with this development, or is it one of those things where you had an idea and you're not necessarily carrying it out to the full extent as you should be?”

"If you're a regional center, and you've been paying finder’s fees to lawyers in the United States or you've been circumventing the securities laws, you need to get counsel on the proper steps to take before you do anything at all to alter, destroy or conceal documents,” Hauer said.

Make Sure Funds Are Properly Tracked

And finally, attorneys said it’s a good idea for regional centers to track the movement of investor funds.

"It looks like they're really interested in tracking the flow of funds, too, so they need to be keeping those records for every [new commercial enterprise] that's sponsored under the regional center's authority," said Jessica A. DeNisi of Klasko Immigration Law Partners LLP, referring to the entity in which the investments are actually made.

Lurie added that it would likely “not go over well” if the regional center has “no idea how much money has been raised.”

Some lawyers are optimistic that EB-5, unaltered since the early 1990s, is ripe for reform this time around, while others believe President Donald Trump and Congress have not been able to devote the time needed to make changes and may simply kick the can down the road by giving the program another temporary extension.