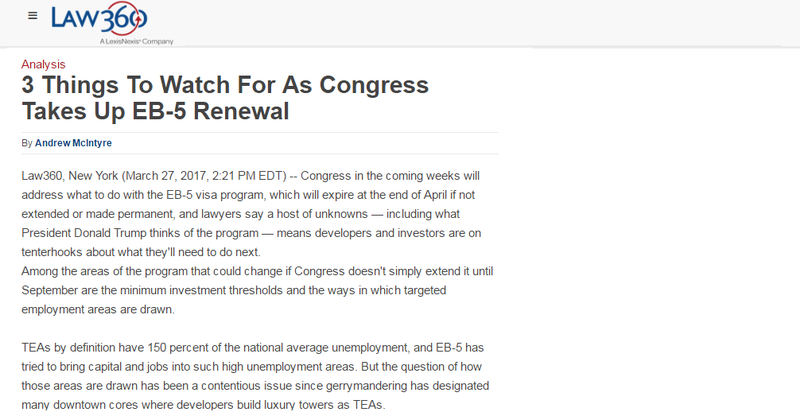 Congress in the coming weeks will address what to do with the EB-5 visa program, which will expire at the end of April if not extended or made permanent, and lawyers say a host of unknowns — including what President Donald Trump thinks of the program — means developers and investors are on tenterhooks about what they'll need to do next.

Among the areas of the program that could change if Congress doesn't simply extend it until September are the minimum investment thresholds and the ways in which targeted employment areas are drawn.

TEAs by definition have 150 percent of the national average unemployment, and EB-5 has tried to bring capital and jobs into such high unemployment areas. But the question of how those areas are drawn has been a contentious issue since gerrymandering has designated many downtown cores where developers build luxury towers as TEAs.

Some lawyers are optimistic that EB-5, unaltered since the early 1990s, is ripe for reform this time around while others believe Trump and Congress have not been able to devote the time needed to make changes and may simply kick the can down the road by giving the program another temporary extension.

Here, Law360 lays out three things to watch for as Congress takes up EB-5.

What Happens to the Investment Thresholds

EB-5 investors currently must commit $1 million to a project or $500,000 if it's in a TEA. And provided that the project creates 10 jobs per investor, it comes out of the deal with its principal back, minimal interest and, most importantly, a green card. Those thresholds haven't changed since EB-5 was launched as part of the Immigration Act of 1990, although there has been much talk over the past several years about raising those marks.

In December former President Barack Obama and U.S. Citizenship and Immigration Services made multiple EB-5 proposals, which included raising the minimum thresholds, and while Congress is essentially starting from scratch as opposed to using a holdover draft from the prior administration, lawyers say, those proposals are still relevant.

"They have a sort of zombie existence. They are now apparently among some staffers being reviewed as possibly a conversation starter," Angelo A. Paparelli of Seyfarth Shaw LLP said. "Or a document to compare against the evolving further iterations of the latest bill."

And Congress needs to be aware that raising the minimums too much may cause investors, many of whom already have long waits to enter the program, to change course.

"For countries like China where there's such a wait, it's not going to make sense if the investment is so high," Cadwalader said.

Trump has been vocal on numerous issues but has yet to take up the question of EB-5. While, on the one hand, lawyers say his background as a developer may suggest he'd support renewing and expanding the program, EB-5 also is an immigration program, which complicates things.

The general sense among lawyers, though, is that the entrepreneurial and business aspect of the program may win out over the immigration aspect in Trump's mind.

"I think the administration will generally support the continuation of the program," Cadwalader said. "He's an entrepreneur. [EB-5 is] money that comes into the U.S. to stimulate the economy, to support growth. ... It's entrepreneurial capital."

Furthermore, although EB-5 technically is an immigration program, it's unlike other ones in that it facilitates investment in U.S. projects and the vast majority of the investors under EB-5 are from China.

Cadwalader said she doesn't believe Trump would necessarily feel the need to add a list of exempt countries under EB-5, since any travel ban in place would likely disallow investors from countries on the travel ban list from obtaining visas under EB-5.

"It's wealthy individuals who would like to immigrate to the U.S. and invest capital. That's a different thought from cracking down on illegal immigration and countries that are on the watch list," she added.

Trump also has a connection to EB-5 through his son-in-law, who recently used the program for a project in New Jersey, and that family connection could influence his views on the program.

Kushner's Trump Bay Street, a luxury rental project in New Jersey, raised $50 million through EB-5. And lawyers believe Trump will support extending the bill, based on its pro-business stance.

"The belief is based on that fact that he is a developer," Jim Butler of Jeffer Mangels Butler & Mitchell LLP said. "He is a businessman."

The White House couldn't be immediately reached for comment.

What Happens With Targeted Employment Areas

Since TEAs have at least 150 percent of the average unemployment, EB-5 has incentivized investors to join projects in those areas by offering a lower investment threshold. Such areas, though, have been the topic of fierce debate for years since much EB-5 capital has flowed to large projects in downtown cores as opposed to projects in rural areas.

A new EB-5 bill could change the way TEAs are drawn or conceived, lawyers say.

"The biggest stumbling block is still the dispute that has long been waged: that is, that most of the EB-5 money, as you look at the program, has gone to gateway cities or large-scale real estate projects — hotels, office buildings, mixed-use commercial development," Paparelli said. "Very little has gone to rural areas. Very little has gone to true inner-city distressed areas."

For many in the debate about extending EB-5, that's a major sticking point because the program had been created in the early 1990s as a job-creation measure but has been used to fund luxury hotels in downtown cores.

"Those areas that are outside the gateway locations of Los Angeles and New York and San Francisco and maybe something in Texas and Florida, they are questing for an opportunity to share in the bounty of tax revenues and job creation that the EB-5 program promises," Paparelli said.

Butler said he believes EB-5 will be moving forward with what he called "rationalized TEAs," like those that exist in California. Cadwalader said she also expects to see changes to TEAs.

"In California, you can't gerrymander. The census tracts must be contiguous. They must look like a ball or a square," Butler said. "It has been a matter of fierce debate within the industry."