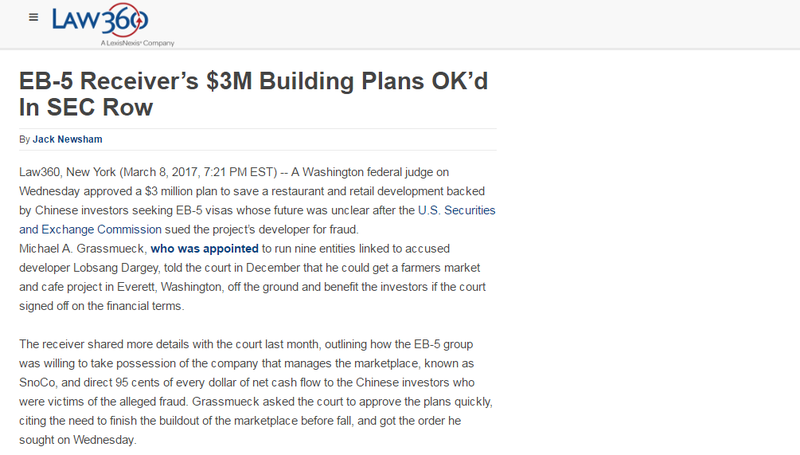 A Washington federal judge on Wednesday approved a $3 million plan to save a restaurant and retail development backed by Chinese investors seeking EB-5 visas whose future was unclear after the U.S. Securities and Exchange Commission sued the project’s developer for fraud.

Michael A. Grassmueck, who was appointed to run nine entities linked to accused developer Lobsang Dargey, told the court in December that he could get a farmers market and cafe project in Everett, Washington, off the ground and benefit the investors if the court signed off on the financial terms.

The receiver shared more details with the court last month, outlining how the EB-5 group was willing to take possession of the company that manages the marketplace, known as SnoCo, and direct 95 cents of every dollar of net cash flow to the Chinese investors who were victims of the alleged fraud. Grassmueck asked the court to approve the plans quickly, citing the need to finish the buildout of the marketplace before fall, and got the order he sought on Wednesday.

“The proposed terms will confirm [EB-5 group]'s agreement to complete the development as originally planned, which will preserve certain tax benefits offered by the city of Everett,” he said in a filing. “The receiver also considered the potential financial return to the EB-5 investors, as well as their immigration interests.”

According to the decision, Dargey initially objected to the budget and plan that Grassmueck had first proposed, saying that the EB-5 group had offered a better restructuring plan. Dargey withdrew his opposition once the receiver presented the new plan in February, which included a letter of intent from the EB-5 group to provide a $3 million loan to work on the project and lower fees than in the proposal that Dargey put forth, according to the receiver’s arguments.

The plan also calls for the EB-5 group to take over an appeal of U.S. Citizenship and Immigration Services’ decision to terminate SnoCo’s status as a regional center, which enables investors to receive EB-5 visas. SnoCo’s receivership was one of the reasons for that decision, Grassmueck said, and its transfer out of court oversight could help the appeal.

Although the Chinese investors and Dargey each raised “concerns” with one or another of the receiver’s plans, each of which was styled as a motion, the SEC didn’t oppose either of them, the court noted. U.S. District Judge James Robart approved both motions, saying little about them but noting the “extremely broad” powers courts have to administer equity receiverships.

Under the judge’s timeline, the restructuring transaction will close in mid-April.

The order comes about a week after Dargey and another defendant agreed to pay more than $18 million to settle the SEC’s claims. The watchdog said that Dargey misappropriated or diverted millions of dollars meant for a Seattle skyscraper project and a mixed-use development. The money was invested by foreign citizens who were looking to immigrate through the EB-5 investor program.

A lawyer for the receiver said he was pleased with the court's decision and would work to meet the deadlines set by the court to complete the transfer.

The SEC is represented by Susan F. LaMarca.