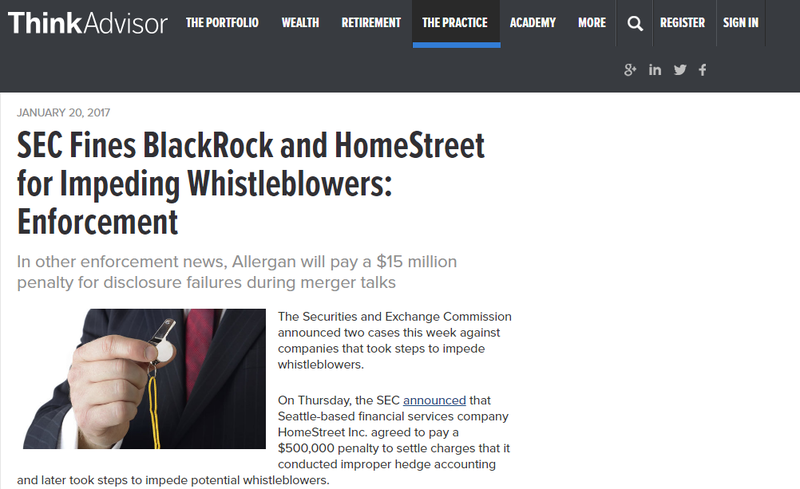 The Securities and Exchange Commission announced two cases this week against companies that took steps to impede whistleblowers.

HomeStreet's treasurer Darrell van Amen agreed to pay a $20,000 penalty to settle charges that he caused the accounting violations.

The SEC's order finds that after HomeStreet employees reported concerns about accounting errors to management, the company concluded the adjustments to its hedge effectiveness tests were incorrect.

When the SEC contacted the company in April 2015 seeking documents related to hedge accounting, HomeStreet presumed it was in response to a whistleblower complaint and began taking actions to determine the identity of the ''whistleblower.''

''Companies that focus on finding a whistleblower rather than determining whether illegal conduct occurred are severely missing the point,'' said Jina Choi, Director of the SEC's San Francisco Regional Office, in a statement.

It was suggested to one individual considered to be a whistleblower that the terms of an indemnification agreement could allow HomeStreet to deny payment for legal costs during the SEC's investigation. HomeStreet also required former employees to sign severance agreements waiving potential whistleblower awards or risk losing their severance payments and other post-employment benefits.

Jane Norberg, Chief of the SEC's Office of the Whistleblower, added, "This is the second case this week against a company that took steps to impede former employees from sharing information with the SEC. Companies simply cannot disrupt the lines of communications between the SEC and potential whistleblowers."

Earlier in the week, on Tuesday, the SEC announced that BlackRock Inc. agreed to pay a $340,000 penalty to settle charges that it improperly used separation agreements in which exiting employees were forced to waive their ability to obtain whistleblower awards.

“BlackRock took direct aim at our whistleblower program by using separation agreements that removed the financial incentives for reporting problems to the SEC,” said Anthony S. Kelly, co-chief of the SEC Enforcement Division’s Asset Management Unit, in a statement. “Asset managers simply cannot place restrictions on the ability of whistleblowers to accept financial awards for providing valuable information to the SEC.”

According to the SEC’s order, more than 1,000 departing BlackRock employees signed separation agreements containing violative language stating that they “waive any right to recovery of incentives for reporting of misconduct” in order to receive their monetary separation payments from the firm.

BlackRock added the waiver provision in October 2011 after the SEC adopted its whistleblower program rules, and the firm continued using it in separation agreements until March 2016.

The SEC announced that Allergan Inc. has agreed to admit securities law violations and pay a $15 million penalty for disclosure failures in the wake of a hostile takeover bid.

The SEC's order finds that Allergan failed to disclose in a timely manner its negotiations with potentially friendlier merger partners in the months following a tender offer from Valeant Pharmaceuticals International and co-bidders in June 2014. Allergan publicly stated in a disclosure filing that the Valeant bid was inadequate and it was not engaging in negotiations that could result in a merger. It was required to amend the filing if a material change occurred.

According to the SEC's order, Allergan never publicly disclosed material negotiations it entered with a different company that would have made it more difficult for Valeant to acquire a larger combined entity. And after those negotiations failed, the investing public wasn’t informed that Allergan entered into merger talks with Actavis, the company that ultimately acquired Allergan, until the announcement that a merger agreement had been executed.

The SEC announced fraud charges against an Oakland, California-based businessman accused of misusing money he raised from investors through the EB-5 immigrant investor program intended to create or preserve jobs for U.S. workers.

The SEC alleges that Thomas M. Henderson and his company San Francisco Regional Center LLC falsely claimed to foreign investors that their $500,000 investments would help create at least 10 jobs within several distinct EB-5 related businesses he created, including a nursing facility, call centers and a dairy operation. This would qualify the investors for a potential path to permanent U.S. residency through the EB-5 program.

But according to the SEC's complaint, Henderson jeopardized investors' residency prospects and combined the $100 million he raised from investors into a general fund from which he allegedly misused at least $9.6 million to purchase his home and personal items and improperly fund several personal business projects such as Bay Area restaurants that were unrelated to the companies he purportedly established to create jobs consistent with EB-5 requirements.