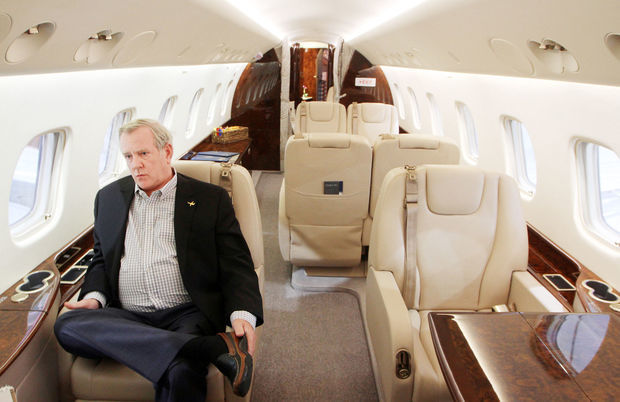 Sitting in one of his company jets, Pat Hogan talks Monday about the opening of his private hangar at the Quad-City International Airport

Pat Hogan remembers moving to the Quad-Cities in 1978 to buy a Shell gas station at 11th Street and Blackhawk Road in Rock Island.

Today, the Chicago native is president and CEO of three major, worldwide companies, so big that he recently purchased two company jets and now has built a hangar at the Quad-City International Airport in Moline.

Monday, he hosted a grand opening of the $4 million project.

Last year, the Rock Island County Metropolitan Airport Authority approved the lease, which paved the way for construction of the 14,000-square-foot structure. The hangar, used exclusively by Hogan's companies, is located on the east side of the airport's cargo ramp and east of the airport's new customs facility.

Hogan is president and CEO of Rock Island Auction Co., a global auction house for firearms, edged weapons and military artifacts. It is located in the Southwest Rock Island Industrial Park. 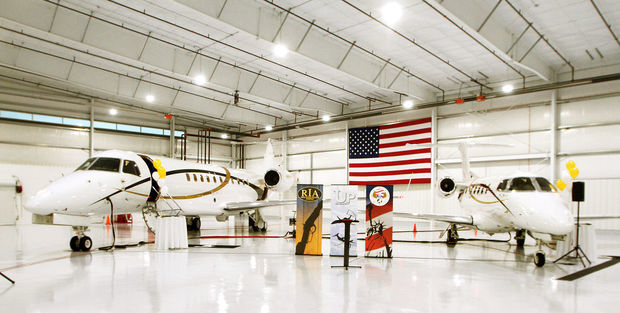 Pat Hogan’s two corporate jets are housed in his UP Management Aviation Hangar.

"I remember I thought they said Blue Island where the Shell station was located, and being from Chicago, I thought that meant a Chicago suburb," he said Monday, sitting in one of his jets in the hangar.

But he moved here anyway. He told his wife he would stay here only two years and then would return to finish college.

But soon he owned five gas stations and eventually 14 video stores in the metro area.

But in 1982, Hogan found out he had cancer, which changed his life.

But he beat those odds and, in the early 1990s, started a firearms auctions business called Rock Island Auction Co. He said the company is a nationally recognized source of high-end collector firearms that has set industry sales records the past several years, maintaining its position as "the No.1 firearms auction house in the world for 11 consecutive years.”

The UP Management Aviation Hangar at the Quad-City International Airport, Moline

Four years later, he started CMB Regional Centers, a grouping of federally designated companies offering alternative financing under the United States investor visa program commonly known as EB-5. The program allows foreign nationals to invest in the U.S. economy, predominately in high unemployment areas, with the requirement to create a minimum of 10 new American jobs per investor, as a pathway to obtaining U.S. permanent residency.

He said the company now has development projects all over the country. He said the demands for travel are constant, in the United States and abroad, which is why he purchased the jets.

Also, in 2014 the Hogan family established a new company in Switzerland to coordinate sourcing of CMB's investors client base which currently stands at more than 3,500 investors.