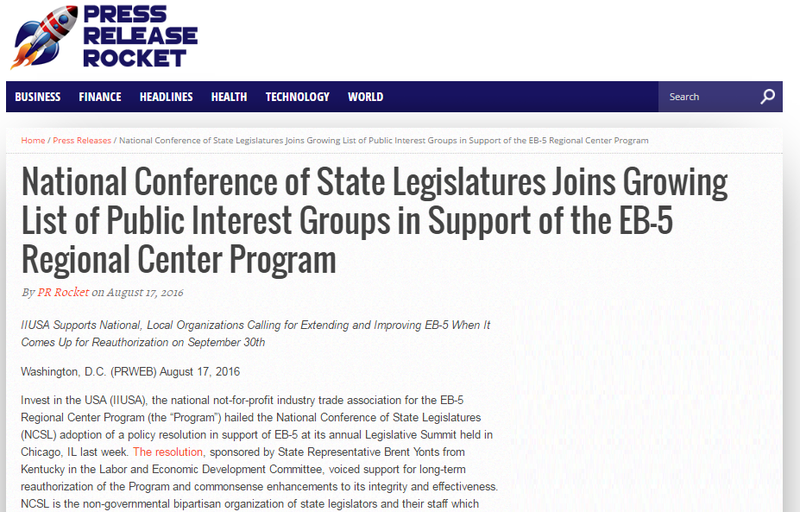 Invest in the USA (IIUSA), the national not-for-profit industry trade association for the EB-5 Regional Center Program (the “Program”) hailed the National Conference of State Legislatures (NCSL) adoption of a policy resolution in support of EB-5 at its annual Legislative Summit held in Chicago, IL last week. The resolution, sponsored by State Representative Brent Yonts from Kentucky in the Labor and Economic Development Committee, voiced support for long-term reauthorization of the Program and commonsense enhancements to its integrity and effectiveness. NCSL is the non-governmental bipartisan organization of state legislators and their staff which seeks to improve the effectiveness of state legislatures, to promote policy innovation and communication among state legislatures and to ensure state legislatures have a strong, cohesive voice in the federal government.

“IIUSA thanks NCSL and its members for its support of the EB-5 Regional Center Program and believe it sends an important message to Congress,” said Peter D. Joseph, Executive Director of IIUSA. “Communities and businesses all across the country see the positive impact that EB-5 investment is having on local and state economies. IIUSA proudly stands with the growing list of national and local organizations calling on Congress to act to ensure EB-5 can continue to deliver billions of dollars of capital to regional economic development projects across the country that create American jobs at no cost to the taxpayer. ”

The NCSL resolution follows the announcement of similar policy resolutions adopted by the National Association of Counties (NACo), U.S. Conference of Mayors (USCOM), and Association of University Research Parks (AURP) earlier this summer. This also follows a July letter from diverse leaders of the EB-5 industry and the American business community calling on Congress to act to extend the Program and enhance the Program’s integrity and effectiveness. Signatories included the American Immigration Lawyers Association, EB-5 Investment Coalition, IIUSA, Real Estate Roundtable, and U.S. Chamber of Commerce.

The growing support coincides with recently reported trends on foreign direct investment (FDI) in the U.S. Last week, the U.S. Department of Commerce announced FDI to the U.S. increased from $2.9 trillion to $3.1 trillion in 2015, a new record. EB-5 accounted for $4.38 billion of FDI in that period, or 14%, and billions of dollars more when secondary impacts of investor purchases in moving and getting settled in the U.S. are considered. The EB-5 Program’s contribution of FDI has grown over 1,200% since the Great Recession to become a vital part of the 21st century U.S. economy.

Founded in 2005, IIUSA is the national not-for-profit trade association for the EB-5 Regional Center industry with a mission of advocacy, education, industry development, and research. The organization represents more than 275 Regional Centers and 200 Associate members, collectively representing big and small projects, urban and rural economic development, and industry sectors ranging from real estate and manufacturing to energy and infrastructure. IIUSA’s members are engines of economic growth and job creation, accounting for a vast majority of capital flowing through the Program.