Investigation of Management at Jay Peak Resort and AnC Biomedical 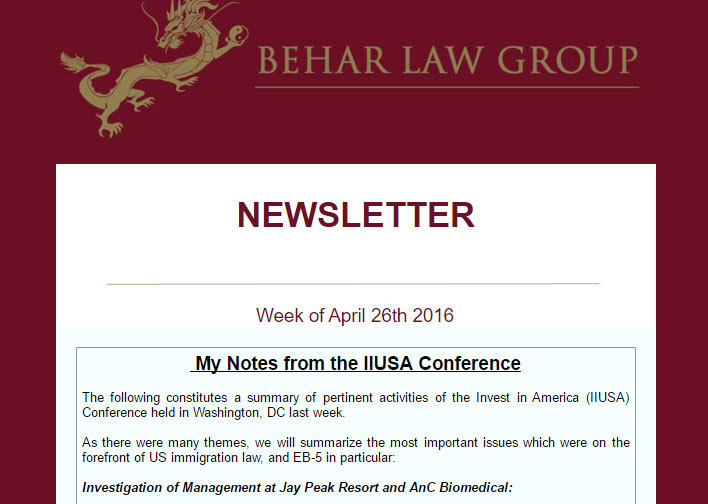 The following constitutes a summary of pertinent activities of the Invest in America (IIUSA) Conference held in Washington, DC last week.

As there were many themes, we will summarize the most important issues which were on the forefront of US immigration law, and EB-5 in particular:

Investigation of Management at Jay Peak Resort and AnC Biomedical:

It was evident that the shocking investigation by the Securities and Exchange Commission (SEC) of Ariel Quiros and William Stenger caught everyone by surprise except for the very few. From the Governor on down, the collapse of the structure by the alleged fraud did not escape any one.

In an attempt to harness more constructive information, the following is the very preliminary information which we were able to garner:

Since 2010, the EB-5 program has been responsible in attracting $9.6Billion, 29,300 US jobs have been created and $2.09Billion in taxes. As the attraction to international investor grows, these numbers should increase.

A new IIUSA media toolkit is not available on its website along with a new Public Relations presentation to educate members. Legislative talking points have been summarized.

FINRA is the federal agency which controls the registration and activities of Brokers/ Dealers. It regulates the securities industry in the US.  There are State and Federal regulations depending on the offerings. EB-5 offerings are indeed a 'security' by definition and, while not requiring registration, it is no different than any other offering as it is a form of investment with an expectation of a dual return, the investment and the immigration benefits. The SEC is after promoters who are "lying, cheating or stealing". Professional advice should be sought to distinguish 'exclusions' from 'exemptions', even though the terms may sound similar, they are not.

State SEC regulators gain their authority to regulate conduct from funds that are going 'into or from within the state', i.e. there is an inbound nexus. Regulators are becoming more skilled at coordinating today with foreign regulators to prevent unlawful transfers of funds.

The EB-5 legal structure force of law is based on : the US Constitution>> the EB-5 Statute>> existing Regulations (after Notice and Comment periods)>> Policy Guidance>> Policy Manual>> Stakeholder meetings>> Trend lines>> Precedent Decisions>> Memos only based on no stakeholder consultations>> Litigation>> Forms and Revision.

The issue of 'material change' to a business plan is central to the approval of conditional and lifting conditional residency. If such material change occurs before or after the I-526 adjustment, it may lead to possible revocation.

Note that a Policy Memo does not have force of law.

There was significant discussion as to a Minor (less than 21 for EB-5 purposes) being a investor/petitioner. It appears that it is not a CIS issue, but rather the source of funds and the ability of a minor to formulate comprehension of the investment itself, i.e. can a child be an accredited investor. Due to some significant Chinese retrogression, some Chinese parents are cooperating with their minor children to confirm the content of the security offering and becoming a co-accredited investor with the child, even if the child is the primary investor for EB-5 purposes. Many authorities recommend a Guardian Ad Litem for such applicants as the contracts may be voidable if the parents do not co-sign.

Knowledge of the long waiting/ processing times for Chinese nationals is low amongst investors.

The August 10, 2015 CIS Memorandum of the Draft policy for I-829 jobs count is that the subject jobs do not need to EXIST but had been CREATED in the two year time period.

Advisors note that child/investors may want to be contemplated for China as of the age of 16, to allow for the long waiting period. The issue remains as to the rescission rights on the contract if the child is less than 21. Parent participation and acknowledgement (we recommend also a third party advisor) to engage with the recognition of the age of the child/investor.
Caution: the funds for EB-5 purposes must be transferred to the child which must then become irrevocable before the transfer to the EB-5 investment.

The champion of the EB-5 community, Senator Patrick Leahy, has been severely wounded by the issues surrounding Jay Peak. We have no information on the position of Senator Bernard Sanders, aside from the fact that he was also a supporter of development in the Northeast Kingdom.

Due to US national elections taking place in November, there is a strong chance that no changes can take place before the inauguration in January 2017, and serious changes may not occur until the Spring of 2017.

Senator Dianne Feinstein of California is advocating termination of the EB-5 program.

Our political advisors at IIUSA have recommended that any updates or changes to the existing legislation, in particular its extension and/or modifications, need to be attached to a proposed bill which would surely pass (yet to be determined). We are entering an era of EB-5 political negotiation. Managers of EB-5 regional center and / or projects are encouraged to create a video gallery of successful investors whose lives have changed and benefited from the program.

For clients who have a long waiting period in EB-5 applications, we often recommend an E-2 investor visa as an interim measure if the client needs to depart their country quickly. We have also come to understand recently that US consuls will look favorably upon an E-2 nonimmigrant visa application even if the submission is made AFTER the filing of an EB-5 application due to the extraordinary waiting period of the latter. Many applicants also often use the F-1 student visa and thus, if the application is properly prepared and transparent, there is a good likelihood that the temporary visa which would allow lawful time in the US along with option of the adjustment of status will be granted.

Many nationals are also acquiring passports from countries which are treaty friendly with the US merely to gain the ability to apply for E-2 nonimmigrant status. This must be reviewed on a case by case basis.

The above is merely a thin report of what transpired at the Convention. We also lost one of our esteemed colleagues, Julie Ferguson, of Miami, a very fine, ethical and outstanding attorney due to an accident while at the Convention. It puts much into perspective.

To the investors of Jay Peak and AnC Biomedical , more precise and complete bulletins will be forthcoming in the weeks ahead.