Your Project was viewed 469 times (totally).

Artists Row: Studio 3807 and The Artisan 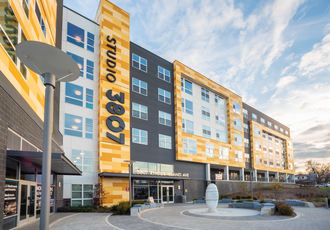 Phase I of the Artists Row Project, known as Studio 3807, was substantially completed in Q4 2018 as schedule, and is currently in rent up. The lead development partner, The Landex Organization, reports that rent up and absorption of the retail, commercial and residential units is ahead of schedule.

Phase II of Artists Row, known as The Artisan, began construction as planned in Q2 2018, and is progressing on schedule. Financing for both phases is beeing provided through a combination of developer cash equity, including cash contributions from Prince Georges County, a JV partner in the project, together with conventional construction loan financing and bridge loans being provided by a regional commercial bank.

EB-5 loan proceeds being provided by Capitol Area Regional Center's CARc Job Fund-The Artists Row Project Loan Series, LLC, will be used to repay a portion of the bridge loans. Global Capital Markets Advisors, as manager of the CARc Job Funds, is continuing to accept new subscriptions for this USCIS pre-approved project from accredited EB-5 investors. Inquiries should be directed to either Michael Sears (msears@gcmafunds.com) or Michael Kolodner (mkolodner@gcmafunds.com).

The Project developer, Landex Development, has already secured first mortgage and bridge loan financing sufficient to fully fund Phase 1 of the Artists Row Project which, based on the independent econometric analysis of projected new job creation, can support new EB-5 visa petitions aggregating up to $18,000,000 for as many as 36 EB-5 investors. Phase 2 of the Project is projected to create additional jobs sufficient to support at least an additional 15 EB-5 investor petitions. Construction of Phase 1 of the Artists Row Project, at 3807 Rhode Island Avenue, began in September 2016, is progressing according to plan, and is expected to be substantially completed in Q1 2018. Phase 2 of the Project, located at 4100 Rhode Island Avenue, is expected to be similarly financed, is scheduled to begin construction in June 2017 and be substantially complete by Q4 2018.

What is the fee for subscribing to the investment (Subscription Fee)?
50,000
Do potential investors need to pay a fee to obtain the operating documents, PPM or other subscription documents?
Yes
If Yes, Is that refundable in the event the investor decides not to invest?
No
If so, what is that Document fee?
$15,000 if Direct (No Agent), otherwise $50,000. Non-Refundable
Could you please describe the procedure for the return of any fees, or fees that are withheld?
N/A
Could you please describe the procedure for return of escrow in the event of denial of the I-526 by USCIS?
There is no escrow for the current Artists Row Project Loan offering. All subscriptions and payment of the full $515,000 (direct/ $550,000 if through Agent) go directly to the Fund and will thereafter be used to fund additional Loan advances to the developer.
Does that include the processing of the I-526, I-829 or any other legal fees associated with the immigration application?
No
What is required for escrow payment at the time of submission of the I-526?
There is no escrow for the current offering
What is the policy for reimbursing the escrow payment in the event of denial?
N/A.
What fees do you pay to 'finders' or agents?
Registered foreign agents and US registered B/D's Only- Up to $40,000 per investor
If there is no finder or agent, would you reimburse that fee to the investor?
Yes
What would be the procedure for reimbursing this fee?
Reduced Subscription Price from $550,000 to $515,000
Do you pay finder’s fees to attorneys?
No
Do you pay fees to unlicensed broker’s or agents?
No

Is this a loan?
Yes
If the investment into the project is a loan, is the borrower a:
Commercial third party (not related to Regional Center principals)
Can you best describe your operating procedure for the filing of the I-526?
The foreign national is free to choose their own attorney with no review from you
Does this project have approved I-526's?
No
Does this project have approved I-829's?
No
Does this Regional Center have approved I-526's?
Yes
Does this Regional Center have approved I-829's?
No
Is any of the subscription fee refundable in the event of a denial of the I-526 by USCIS?
No
Amount of EB-5 investors anticipated for this phase?
Up to 36 for Phase 1. No minimum number required.
What percentage of overall funding is expected to be sourced from EB-5 investors?
translation missing: en.percentage_funding_from_investors.25_50
Are non EB-5 investor’s allowed to participate?
Yes
If so, what is the expected ratio of EB-5 to non EB-5 investors expected to be?
3:1 or greater
Can you please explain if EB-5 and non EB-5 investors treated equally in the distribution of dividends and profits?
Yes. All investors in CARc Job Fund- The Artists Row project Loan Series LLC are Class A investors in the fund and treated equally as to dividends and profits.
Under what circumstance(s) would EB-5 investors be expected to contribute additional capital to the partnership or the project?
None. There is no obligation to provide additional capital after making the required initial capital contribution.

Does this Project have Exemplar Approval?
No
Please describe the issues brought up in the RFE and response to the Request
N/A

Has this project been the subject of a USCIS/SEC/FBI/DOJ/AAO Review, Notice, Investigation or Action
No
The result of the review, investigation and action
I-924 was submitted to USCIS on 9/30/2016 requesting pre-approval of the Artists Row Project. No response from USCIS as of 3/1/2017.

Is Regional Center located within a Targeted Employment Area (TEA)?
Yes
Is this a Public / Private partnership?
Yes
Job creation methodology
RIMS II
Does the job creation rely on direct jobs, capital expenditure, or a combination?
Combination
How many jobs are expected to be created in total? (Direct)
316.3
How many jobs are expected to be created in total? (Indirect & Induced)
268.8
How many jobs are expected to be created in per investor? (Direct)
6.2
How many jobs are expected to be created in per investor? (Indirect & Induced)
5.27
How are jobs allocated to the pool of investors?
in order of Fund subscription date on a 1st come, 1st allocated basis. All numbers above based on maximum $25.5 million Loan with 51 EB-5 investors in the Fund. Lower number of Fund subscriptions and EB-5 investors will increase jobs created per investor ratio.
Can you describe the job creation model? For instance, is it based on capital injection, or on a direct job creation and indirect job multiplier, or other?
Report, dated May 2016, by Dr. Paul Sommers, Ph.D., based on total development costs and projected operating revenues for the Project, as described in the business plan for the Artists Row Project, using appropriate RIMs II multipliers and adjustments.
Can you please describe what role a Public sector entity or government body has, if any, in overseeing has in overseeing the commercial operation, the accounting or tracking of the job creation, funding, issuing bonds, or any other investment or audit role that they might perform?
After soliciting and reviewing competitive proposals from private developers, Prince Georges County, Maryland, acting through it Revenue Authority and its Redevelopment Authority (collectively, PG County"), chose the development plan submitted by Landex Development LLC for the redevelopment of the two Artists Row project sites, 3807 and 4100 Rhode Island Avenue, and thereafter made substantial cash equity contributions to Brentwood Development, LLC, the Owner of Phase 1 of the Artists Row Project, as part of its ongoing plan to invigorate the Brentwood Arts District in which the Project is located. PG County is thus an equity partner, together with Landex controlled affiliates, in the Artists Row Project.