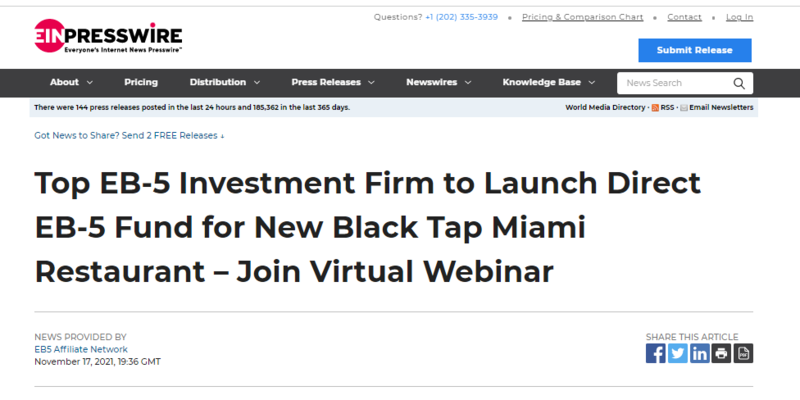 EB5AN will host a webinar on Thursday, November 18, 2021, at 2:00 PM EST on Black Tap Miami, and the process of EB-5 investment. Register here to attend or watch the recorded event later.

Popular international restaurant group Black Tap Craft Burgers & Beer is working on a new Black Tap flagship in Miami –the first location for the brand in Florida. Existing locations in New York, Nevada, California, United Arab Emirates, Switzerland, and other international venues have earned numerous awards and a loyal following. Rooted in the legendary SoHo neighborhood of New York and recognized internationally for its mouth-watering burgers, craft beers, and world-famous CrazyShake® milkshakes, the new Black Tap in Miami is expected to deliver a true New York experience along with its award-winning menu when it opens in the Brickell City Centre.

“We are excited to be working with Chris Barish and Julie Mulligan of the Black Tap Group,” said Sam Silverman, founder and managing partner of EB5AN. “Chris and Julie’s team is very experienced and are world-class restaurant operators with an impressive portfolio of successful restaurants. The Black Tap brand and it’s world-famous CrazyShake® milkshakes are iconic and recognized worldwide. Black Tap has already launched many successful locations in the United States and around the world. We want to place EB-5 investors in an investment with an experienced and established operator like Black Tap. The new location in the heart of Miami is a perfect fit for our EB-5 investors”

Direct EB-5 investments are now the only option available for foreign nationals who wish to apply for green cards under the United States’ immigrant investor program. The regional center program, which historically has been the most popular option for EB-5 investments, expired on June 30 and has not yet been reauthorized by the U.S. Congress. Given the uncertainty of the program’s future and the high probability that U.S. Citizenship and Immigration Services (USCIS) could soon increase the minimum investment amount, many aspiring immigrants are seeking sound investments in viable business enterprises.

“Direct EB-5 investments are the only game in town,” added Silverman. “Our phones haven’t stopped ringing since the minimum investment amount reverted to $500,000, and the lapse of the regional center program leaves many prospective investors in unfamiliar territory. They want high certainty of outcome and low risk. An investment in the Miami location of Black Tap, provides exactly that.”

Created in 1990, the EB-5 Immigrant Investor Visa has long been a gateway to the United States for foreign nationals living abroad, as well as by those already working or studying in the U.S. on nonimmigrant visas including H-1B, L-1B, and F-1. Thousands of families from all over the world have successfully immigrated by making a job-creating investment in a U.S.-based business enterprise. The EB-5 program has facilitated billions of dollars of foreign direct investment into the United States and created tens of thousands of jobs over the last three decades.