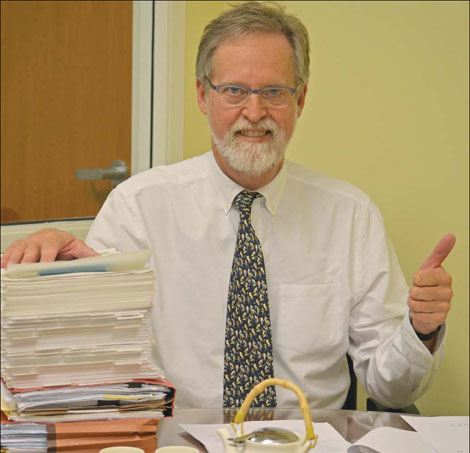 Green tea in a white China set sits on the table by a stack of files in the San Francisco office of Martin Lawler, an attorney who helps EB-5 investors with their applications.

The tall pile of files relates to only one Chinese investor, a millionaire, who is seeking US residency through EB-5, the country's immigrant investor program.

"Over the past two or three years, people from China's mainland have become my main clients," he says from the Lawler & Lawler offices near Fisherman's Wharf.

"I have represented around 200 EB-5 cases, of which 70 percent are Chinese clients who speak Mandarin."

Under EB-5, an applicant is given permanent US residency if his or her investment is at least $1 million and leads to 10 full-time jobs within two years. That investment threshold is halved if the jobs created are in a rural or high-unemployment area.

"It is always a picture in my memory. As a boy, I rushed down from his law firm upstairs, jostled my way through many Chinese on the ground floor who had come to seek help for family members' immigration, and ran into the happy crowds who were celebrating the Chinese New Year on the street."

Spring Festival, the time of the Lunar New Year, is traditionally when families get together, and Lawler senior had dedicated his life to achieving this for the early generation of Chinese immigrants.

The young Lawler began his career at his father's law firm in 1977, and has since moved offices to the city's financial district. Two of his 14 employees are translators who speak fluent Mandarin and Cantonese.

Lawler has visited China 14 times to educate the market and meet his biggest group of potential clients. Beijing, Shanghai, Guangzhou and Chongqing are his most frequent destinations.

During the latest trip in November, Lawler stayed in Shanghai for four days and was invited by a private bank to hold an EB-5 seminar for staff members who were doing related business.

On this trip, he also talked to more than 30 Chinese who are potential EB-5 investors in Shanghai - mostly well-attired businessmen, he says.

"We communicate through a professional translator, even though some of them are able to speak English."

Lawler says he has heard there are at least 600 legitimate immigration agencies in China, and a similar number of illegal ones.

He is trying to educate the Chinese investors to avoid the traps of illegal agencies, such as the one possibly uncovered by the Securities and Exchange Commission last month.

The SEC alleges that Anshoo R. Sethi, 39, "created a Chicago Convention Center and Intercontinental Regional Center Trust of Chicago and fraudulently sold more than $145 million in securities and collected $11 million in administrative fees from more than 250 investors, primarily from China".

It is much safer and reliable to reach qualified regional centers in the US with the help of a law company, Lawler says.

For while the EB-5 lawyers have found more work representing individual investors from China, they also get steady business from regional centers.

The number nationwide has increased from a dozen in 2007 to more than 200 this year as more centers get approval.

So far, regional centers that run real estate projects, such as hotels, are the top choice for most Chinese, Lawler says.

"It requires a lot of capital in one place and it has to be at risk. One cannot just invest it in a stock market; it has to be invested in a business," he says.

EB-5 funds can go into any enterprise, from medical and energy businesses to vineyards.

One of Lawler's Chinese EB-5 clients has just spent $1.2 million on a house in the San Francisco bay area. Next, he may buy expensive furniture and cars and employ local people for various services, Lawler says. "It is about the great economic footprint."

"There are 100 stories behind 100 EB5 investors, but the biggest impulse for Chinese is seeking education opportunities for their children."

They also do it as a retirement plan or to diversify their business, he says.

"The economy has been good in China, and there is a great interest in people investing and emigrating to places."

As a California immigration law specialist with more than 30 years' experience, Lawler is the author of Professionals: A Matter of Degree, a treatise on business visas, published by the American Immigration Lawyers' Association.