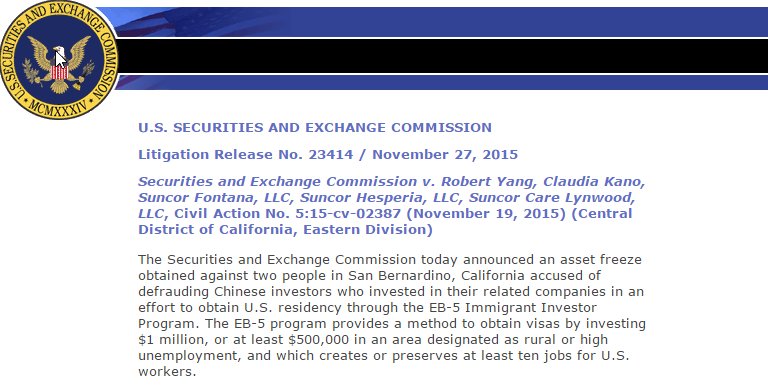 The Securities and Exchange Commission today announced an asset freeze obtained against two people in San Bernardino, California accused of defrauding Chinese investors who invested in their related companies in an effort to obtain U.S. residency through the EB-5 Immigrant Investor Program. The EB-5 program provides a method to obtain visas by investing $1 million, or at least $500,000 in an area designated as rural or high unemployment, and which creates or preserves at least ten jobs for U.S. workers.

According to the SEC’s complaint filed in U.S. District Court for the Central District of California, Robert Yang, MD, Claudia Kano, and their affiliated “Suncor” entities have raised approximately $20 million from 40 investors located in China for the development of three “sub-acute nursing care facilities” located in Fontana, Hesperia, and Lynwood, California. But the SEC alleges that Yang and Kano diverted more than $10 million for personal and other uses and jeopardized investors’ prospects for U.S. residency under the terms of the EB-5 program.

Among other things, the SEC alleges that Yang and Kano, contrary to representations made to investors, used investor funds for Yang’s medical practice, to pay Yang’s personal taxes, and to purchase real estate unrelated to the EB-5 projects. Further, although the Defendants made repeated statements to investors that their funds would “only” be used to develop the specific medical facility project in which they made an investment, the Defendants transferred funds between projects. The SEC also alleges that, unbeknownst to investors, Yang and Kano diverted investors’ funds to a third-party “finder” to locate investors in China, which would disqualify them from the EB-5 program because this caused their net investments to fall below the minimum $500,000 threshold. The SEC alleges that while investors understood and paid $45,000 fees to the finder in addition to their $500,000 investments, they were not told that another 18% of their investments would be deducted and diverted to the finder.

On Wednesday, November 25, 2015, the court granted the SEC’s request for an asset freeze, and an order expediting discovery and prohibiting the destruction of documents.

The SEC’s investigation was conducted by Michael Cates and Kerry Matticks of the Denver Regional Office and supervised by Ian Karpel. The SEC’s litigation will be led by Zachary Carlyle.