Officials cut the ribbon on a runway extension at the Northeast Kingdom International Airport in Coventry on Thursday, Nov. 12, 2015

It was raining and windy when Bill Stenger, his business partners and several state leaders cut the ribbon on a 1,000-foot runway extension at the newly renamed Northeast Kingdom International Airport on Thursday.

Members of Gov. Peter Shumlin’s cabinet sent representatives, as did Vermont’s congressional delegation. Legislators from the Newport area came to hear about the 100 jobs that could be created once the airport expands. Private aviators who use the airport were very happy.

Patricia Sears, who helped bring the extension over the finish line as chair of the Northeast Kingdom International Airport Committee, was excited, too. She pointed to a corporate jet that was taking off in the poor weather. If the state and federal government hadn’t poured about $9 million into extending the runway, Sears said, that jet wouldn’t have been able to take off safely.

Stenger said Thursday he’s now planning to put at least $2.5 million in private money to build a 10,000-square-foot airport terminal, warehouse, and flight design assembly facility — the lynchpin of the project. He won’t use EB-5 immigrant investor money, but didn’t say where he’s getting it. He wants to be done by next winter.

“It’s private money, yeah, sure,” Stenger said. “There’s any number of avenues for financing a potential facility that has potential value. So I’ve been asked a number of questions of ‘Does this need to be EB-5 money?’ No. It’s not. It’s not contingent on that.”

Stenger said there are 250,000 people “within a relatively short radius of this property,” and he will “really work hard” to attract commercial aviation. He said he envisions doing flight training at the airport. And he wants to have pilots stop in Coventry and refuel when they’re on their way to Boston or New York City. Jet fuel is much cheaper in Vermont than in Canada, he said.

He pointed to Nat Sims, an amateur pilot in Boston who keeps ties in Vermont, who invested “significantly” in two hangars and wants someone to start a charter operation and use the hangars he built.

“I’m a believer, and I’m really excited just by the way this all came together to grow the facility,” Sims said.

Guy Rouelle, the aviation program director for the Agency of Transportation, said there would be 100 direct jobs created. Rouelle said those include 25 inside the terminal, including customs workers and restaurant workers; 25 more would be in the aircraft assembly facility; two would be state jobs to maintain the airfield; and a “significant” amount in bonded warehousing. 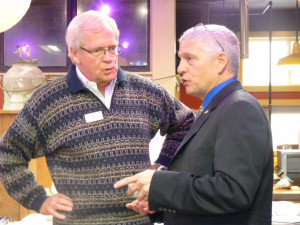 The state just finished working with the Federal Aviation Administration to build a runway extension at the Rutland-Southern Vermont Regional Airport, and is planning one at the Middlebury State Airport, where it is getting push-back from some residents. The project at the Coventry airport has more support.

“I think it’s wonderful,” Newport Mayor Paul Monette said. “Once again, it kept being told today, the public-private partnerships, and that’s key. We all know that government can’t do it alone. It takes private investment, and I think this expansion is just a wonderful expansion.”

“Our city fathers in 1945 saw the need of an airport,” he said. “(The expansion) allows for commercial airplanes to land in all types of weather. The cargo services will be able to start.”

Mary Walsh, who manages New England projects at the Federal Aviation Administration, said Vermont has made its way to the forefront in attracting aviation money. The federal government has been paying as much as 90 percent of the airport upgrades across the state.

“I represent you guys, the taxpayers, and I firmly believe that I am the steward for your money,” Walsh said. “I really make sure that these projects are good, and I’m willing to walk away from here if I feel I can spend my money in Bridgeport, Connecticut, or if that’s in downtown Boston.”

Stenger said the Northeast Kingdom International Airport would have a beautiful terminal and be a hub of economic development. He scoffed at people who oppose the project.

“We as a community believe in our future,” he said. “ The naysayers can go to hell.”