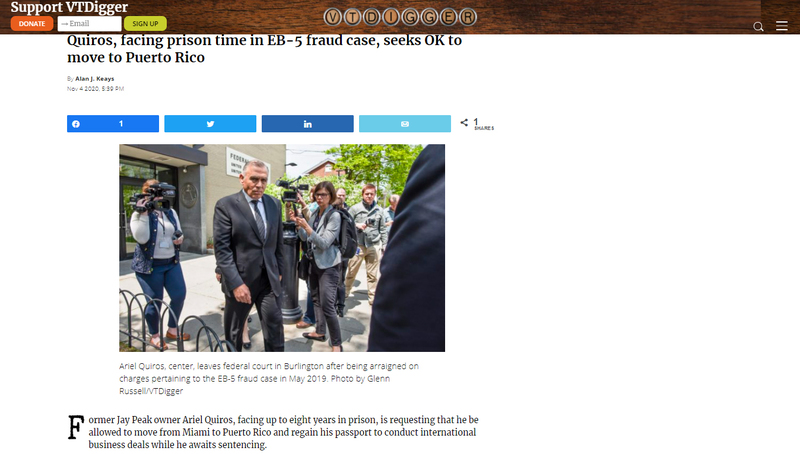 Ariel Quiros, center, leaves federal court in Burlington after being arraigned on charges pertaining to the EB-5 fraud case in May 2019.

Former Jay Peak owner Ariel Quiros, facing up to eight years in prison, is requesting that he be allowed to move from Miami to Puerto Rico and regain his passport to conduct international business deals while he awaits sentencing.

Quiros pleaded guilty in August to federal criminal charges for his role in a scheme to bilk EB-5 foreign investors who had put millions of dollars into a failed project to build a biomedical research facility, known as AnC Bio Vermont, in Newport.

He faces up to 97 months in prison as part of a plea agreement he reached with prosecutors. Quoris isn’t expected to be sentenced until late next year after co-defendants in the criminal case, including his business partner, Bill Stenger of Newport, stand trial.

In the meantime, Neil Taylor, a lawyer representing Quiros, is seeking to amend his client’s release conditions that would allow him to move from his home in Florida to Puerto Rico.

Taylor also wants the return of his client’s passport so he can travel overseas as an international businessman.

Prosecutors said they would not object.

According to the motion filed Wednesday in federal court in Vermont, Quiros needs his passport returned from the court so he can work to meet his financial obligations and “sustain his self worth.”

“He is an entrepreneur who specializes in brokering business deals, has extensive international experience with shipping and lines of credit, and has many lucrative international ties and relationships,” Taylor wrote of Quiros.

The criminal charges brought by federal prosecutors in May 2019 against Quiros, Stenger, and two of their associates, stem from an international business enterprise they headed that federal regulators have termed “nearly a complete fraud.”

Quiros and the other developers, prosecutors say, raised over $80 million from more than 160 investors through the federal EB-5 immigrant investor program for the AnC Bio Vermont project in Newport that never got off the ground. Authorities said Quiros and Stenger ran a “Ponzi-like” scheme where money raised for one project was used to pay for earlier developments. 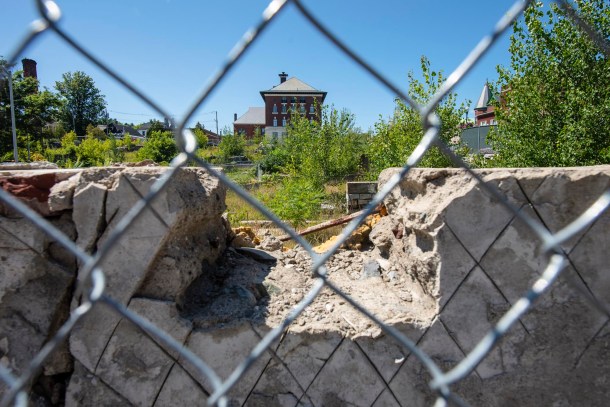 Downtown Newport’s Big Hole, where a Stenger-Quiros development was planned but never built.

The developers claimed the Newport project was modeled after a similar biomedical center in South Korea that had been headed by Quiros associate Alex Choi, who has also been indicted on criminal charges in Vermont and remains at large.

As part of the enterprise, according to court filings, the developers traveled to Asia to solicit foriegn investors in the biomedical center project as well as massive upgrades at Jay Peak and a new hotel and conference center at Burke Mountain.

Foreign investors who put at least $500,000 into a qualified project through the federal EB-5 visa program are entitled to permanent U.S. residency, or green cards, provided their investment met job-creating requirements.

All together, developments led by Quiros and Stenger, Jay Peak’s former president and CEO, involved more than $400 million raised from over 800 EB-5 investors.

Quiros is believed to have used $50 million for his personal use, including for paying his taxes and buying a luxury New York City condo.

Stenger, according to federal prosecutors, was well-connected with state leaders and served as the front man for the scheme, soliciting immigrants from all over the world to invest in Jay Peak Resort, Burke Mountain and AnC Bio Vermont.

Quiros, a Miami businessman, had owned Jay Peak and Burke Mountain ski resorts at that time.

He has since pleaded guilty to three of the 12 charges brought by prosecutors in Vermont, admitting to federal counts of conspiracy to commit wire fraud, money laundering and concealing material information.

As part of the plea agreement, prosecutors can seek a sentence of a little more than eight years in prison for Quiros while his attorney can argue for any lesser prison term.

Taylor, Quiros’ attorney, wrote in his filing Wednesday that if Judge Geoffrey Crawford grants the motion to allow his client to move from Miami to Puerto Rico and travel overseas for work, he would alert court officials prior to any international travel.

Crawford approved a request last year that allowed Stenger to get his passport back so he can travel to Canada and Japan to consult with ski areas in those countries.

Crawford granted that request over the objection from prosecutors.

In Taylor’s filing, he wrote that prosecutors have been made aware of his request for Quiros and “the government has no objection.”

Assistant U.S. Attorney Paul van de Graaf, a prosecutor in the criminal case against Quiros confirmed Wednesday that he was not objecting to Quiros’ recent requests.

“We figured it was unfair to not treat Mr. Quiros like Mr. Stenger,” Van de Graaf said.

Both Quiros and Stenger had earlier reached monetary settlements with federal and state regulators who accused the two men of misusing $200 million of the more than $400 million they raised through the EB-5 program for their projects.

As part of the resolution to civil enforcement brought against him by the U.S. Securities and Exchange Commission, Quiros agreed to surrender $81 million in assets, including Jay Peak and Burke Mountain ski resorts.

He also agreed to turn over to state regulators an estimated $2 million in property he owned in Vermont.

It appears, however, that one property that Quiros didn’t have to give up is a home in Puerto Rico he is seeking to move to with his wife.

The filing Wednesday stated that Quiros wants to move to that home as soon as he sells his residence in Miami, which he is currently “aggressively” marketing for sale.