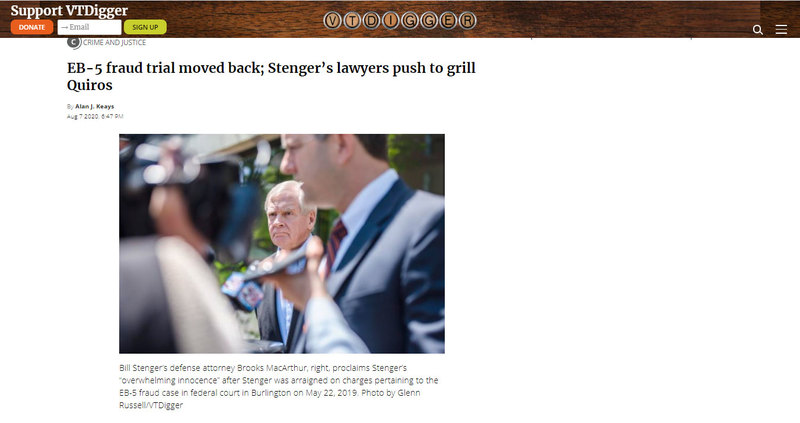 Bill Stenger’s defense attorney Brooks MacArthur, right, proclaims Stenger’s “overwhelming innocence” after Stenger was arraigned on charges pertaining to the EB-5 fraud case in federal court in Burlington on May 22, 2019.

A trial for at least two of the defendants charged in the largest fraud case in the state’s history continues to face delays as the attorneys for one of them contend that a prosecution move could limit their client’s ability to blame someone else for the alleged criminal activity.

Jay Peak owner Ariel Quiros, the resort’s former president Bill Stenger, as well as William Kelly, a key adviser to Quiros, had been set to stand trial in January on charges related to the collapsed proposal to build a $110 million biomedical research facility in Newport.

However, Quiros has since reached a plea deal with the prosecution this week and is expected to formally enter his guilty pleas next week.

Judge Geoffrey Crawford agreed during a video hearing Friday to move back the January trial for the two remaining defendants to April, at the request of attorneys for all the parties in the case.

It’s the latest delay in the trial for the developers since their multi-count indictment in May 2019 when it had initially been set for October of this year.

Attorneys and the judge Friday cited the ongoing Covid-19 pandemic and the difficulty it would create in holding a trial with a 12-member jury, plus many others, all in the same courtroom as a major factor in pushing back the date.

“We concur with that on behalf of Mr. Stenger,” attorney Brooks McArthur, a member of Stenger’s legal team, added.

Crawford then set the new trial date for April 5.

“We should really plan to go forward at that point,” the judge said.

Stenger, Quiros and Kelly were business partners in the proposed AnC Bio Vermont development in Newport and are all named in a federal indictment charging each with fraud and making false statements to the government about the status of the project.

Bill Kelly arrives outside federal court in Burlington for his arraignment on charges pertaining to the EB-5 fraud case on May 22, 2019.

Federal regulators have since termed that project “nearly a complete fraud.”

McArthur and David Williams, Stenger’s attorneys, are objecting to a provision of the proposed plea deal worked with prosecutors and Quiros. They contended in a recent court filing and during the hearing Friday that the terms of the agreement with Quiros could impede their ability during their client’s trial to question Quiros.

Stenger’s defense alleges Quoris was the mastermind behind the fraud scheme and left Stenger in the dark. As part of proving that, Stenger’s lawyers want to question Quiros during their client’s trial.

Prosecutors allege that while the developers raised over $80 million from more than 160 foriegn investors through the federal EB-5 visa program, the project never got off the ground and money was siphoned off to cover other expenses, including a New York City condo for Quiros.

Quiros, as part of his plea deal, has agreed to cooperate with prosecutors as they continue to move forward in their criminal cases against Stenger and Kelly. In exchange for pleading guilty to three of the 12 counts against him, prosecutors say they will ask for a sentence for Quiros of not more than 97 months, or a little more than eight years.

The plea agreement with Quiros allows him to be sentenced after the cases against the other defendants, Stenger and Kelly, are resolved.

If Quiros is not sentenced until after the case against Stenger is resolved, a filing from Stenger’s attorneys stated, he could not be called as a defense witness due to Fifth Amendment rights against self-incrimination as his case would still technically be pending despite his guilty pleas.

Quiros could, however, be called as a prosecution witness, waiving his Fifth Amendment rights, and testify at Stenger’s trial, but there is no guarantee that would happen.

To solve the problem, Stenger’s lawyers called on the judge to delay Quiros’ sentencing until the government rested its case at trial against their client.

Ariel Quiros arrives outside federal court in Burlington for his arraignment on charges pertaining to the EB-5 fraud case on Wednesday, May 22, 2019.

If the government does call Quiros as a witness in that trial, according to Stenger’s attorneys, they would then have an opportunity to cross-exam him.

Should federal prosecutors not call Quiros as a witness, the judge could recess Stenger’s trial, hold a hearing to sentence Quiros, and then allow the trial to proceed. That would allow for Quiros to be called to testify as a defense witness without the same Fifth Amendment rights, Stenger’s attorney contends.

Crawford said he found some problems with the plan, since no matter when Quiros’ were to testify in the case he could still be in jeopardy of facing prosecution on state charges related to his actions even if the federal case against him is resolved.

Williams, an attorney for Stenger, countered that was a very unlikely possibility, arguing that state, as well as federal authorities, have been investigating the matter for years. Over that time, Williams added, the state has deferred to federal prosecutors to handle the criminal prosecution.

At one point, Williams said it would be “ridiculous” to think that after all this time any county prosecutor or the state’s Attorney General’s Office would move forward with criminal charges against Quiros related to the matter.

“Would you send him a letter of apology if it turns out you are wrong?” Crawford asked Williams.

“Well,” the attorney replied, “I could.”

McArthur, speaking after the hearing, said there is also the issue that the statute of limitations would have expired on any charges the state could bring against Quiros.

Assistant U.S. Attorney Nicole Cate, a federal prosecutor in the case, told the judge during the Friday hearing that there was no need to rush and decide the matter immediately.

Instead, she said, her office would respond to the issue raised by Stenger’s lawyers in writing through a court filing.

Crawford agreed to allow additional briefing on the matter before issuing any ruling.

“There’s plenty of time to sort it out,” the judge said.