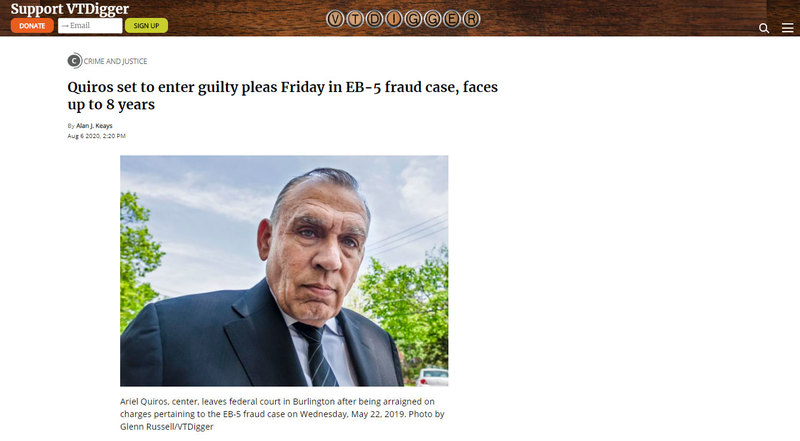 Ariel Quiros, center, leaves federal court in Burlington after being arraigned on charges pertaining to the EB-5 fraud case on Wednesday, May 22, 2019.

Jay Peak’s former owner and the accused mastermind of massive investor fraud in Vermont’s the Northeast Kingdom is set to plead guilty Friday morning to federal charges against him, with prosecutors agreeing to cap any possible sentence for him at a little more than eight years.

The plea deal between federal prosecutors and Ariel Quiros was filed in federal court in Vermont on Thursday, with a video hearing scheduled for 9:30 a.m. Friday where he is expected to enter his guilty pleas.

Neil Taylor, a Florida attorney representing Quiros, said at a hearing last month that his client intended to cooperate with federal prosecutors in the case and enter a guilty plea. However, the terms of any deal between federal prosecutors and Quiros had not been revealed.

Those terms were made public Thursday with the filing of the plea agreement. The document stated that Quiros will plead guilty to three of the dozen counts against him, including conspiracy to commit wire fraud, money laundering and concealing of material information.

The document also stated that the federal agreed “that the appropriate term of imprisonment the Court should impose is 97 months or less,” or a little more than eight years.

“Under this agreement,” the document added, “the Court retains discretion with all other aspects of the sentence, including the fine, the restitution, and the term of supervised release.”

Quiros will not be sentenced at the hearing Friday. Instead, his sentencing will be delayed until after the cases against two other business partners named in the same indictment as him are resolved.

Both of those business partners, Bill Stenger, Jay Peak’s former president and CEO, as well as William Kelly, a past key advisor to Quiros, are not scheduled to stand trial until sometime next year.

All three men named in the indictment returned in May 2019 are facing charges of fraud and making false statements in connection with a proposed $110 million biomedical research center development in Newport, known as AnC Bio Vermont.

The U.S. Securities and Exchange Commission brought an enforcement action against Quiros and Stenger more than three years ago accusing the two men of taking part in a “Ponzi-like” scheme to defraud foriegn EB-5 investors in a series of projects in northern Vermont over nearly a decade.

In that civil case, the SEC said the AnC Bio Vermont project was “nearly a complete fraud.” Both Stenger and Quiros have resolved the action brought against them with Quiros taking the biggest hit, agreeing to surrender to federal authorities $81 million in assets including his stake in Jay Peak and Burke Mountain ski resorts.

Neither Taylor, Quiros’ attorney, or federal prosecutors in Vermont could immediately be reached Thursday afternoon for comment.