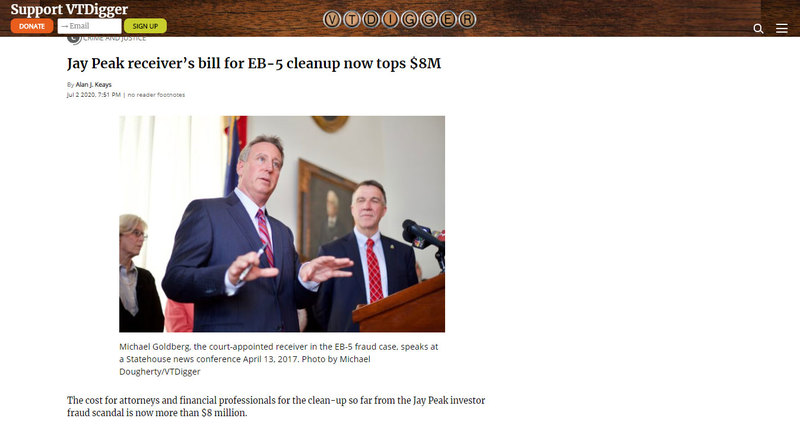 The cost for attorneys and financial professionals for the clean-up so far from the Jay Peak investor fraud scandal is now more than $8 million.

A federal judge recently approved the latest request for fees and expenses from Michael Goldberg, a court-appointed receiver who has been overseeing the properties related to the scandal since April 2016.

Goldberg took his post after state and federal regulators brought civil investor fraud lawsuits against Ariel Quiros, Jay Peak’s owner, and Bill Stenger, past president and CEO of the resort.

Both Quiros and Stenger as well as two of their associates have since been indicted on federal criminal charges of fraud and making false statements to the government related to a failed project they headed to build a $110 million biomedical research center in Newport.

Goldberg has filed roughly every six months in federal court in Florida requests for fees and expenses related to his management of the properties at the center of the civil lawsuit brought against Quiros and Stenger by the U.S. Securities and Exchange Commission more than four years ago.

That case is pending in Miami because that’s where Quiros resides and many of his business interests are located.

Judge Darrin P. Gayles approved that the latest request two weeks ago for another $707,874 for Goldberg’s fees and expenses as well as for those assisting from Sept. 1, 2019, to Feb. 29. That brings the total amount Goldberg has requested and been approved to receive for expenses and fees since April 2016 to $8,380,099.

Goldberg wrote in his most recent fee request that he and his firm, Akerman LLP of Fort Lauderdale, Florida, as well as the other professionals working with him, have been charging reduced rates from their standard rates for their receivership work.

He added that he had reduced his standard rate by $300 an hour and other professionals at his firm have reduced their rates to $215 an hour. Overall, Goldberg wrote, reduced fees in the latest request from those assisting the receivership has resulted in $500,000 savings from if the standard rates been charged.

In the latest request, Goldberg provided the breakdown of fees and expenses:

— Kapila Mukamal, an accounting firm based in Florida, had fees and expenses totaling $107,663.

— Klasko Immigration Law Partners LLP, of Pennsylvania, which has worked for the receivership in assisting with EB-5 immigration matters, had fees and expenses of $53,496.

— The law firm of Downs Rachlin Martin, PLLC, in Vermont, had fees and expenses of $5,419.

Among the properties Golberg is overseeing are Jay Peak Resort and Burke Mountain resort, both in northern Vermont. The resorts were forced to close early this ski season due to the Covid-19 pandemic.

Also, the filing seeking the fees stated, the coronavirus is affecting other matters related to the receivership, delaying the sale of Jay Peak resort and continuing to keep the sale of Burke Mountain on hold as he seeks to use the proceeds from those eventual transactions to pay back defrauded investors.

Goldberg did state in the filing that the receivership is still involved in a host of pending civil litigation related to the properties as it seeks other ways to recoup money for investors and other creditors.

He also predicted in the filing that more legal action may be on the way.

“While the Receiver cannot yet predict the likelihood, amount, or cost-effectiveness of particular claims or the claims as a whole,” Goldberg wrote, “the Receiver continues to diligently evaluate claims against third parties.”

The money to pay the fees and expenses, according to the filing, comes from previous legal settlements in the case and from the earlier sales of Quiros’ assets.

Regulators accused Quiros and Stenger in those 2016 civil lawsuits of misusing more than $200 million of the over $400 million the developers raised through the federal EB-5 investment program. That initiative allows investors from other countries to obtain permanent U.S. residency if their investments of at least $500,000 each meet job-creating requirements.

The money had been raised by Quiros and Stenger to pay for massive upgrades at Jay Peak and additional projects in other communities in northern Vermont, including the proposed biomedical facility in Newport.

Both Quiros and Stenger have reached monetary settlements in those civil actions, with neither admitting nor denying any guilt.

However, in May 2018 the two men, as well as two others, were both indicted on federal criminal charges stemming from that project in Newport, AnC Bio Vermont. That project to build a biomedical research facility in the Northeast Kingdom raised more than $80 million from over 160 EB-5 investors and never really got off the ground.

Both Stenger and Quiros have pleaded not guilty to the host of criminal charges against them. A trial is currently set for both men in January 2021.