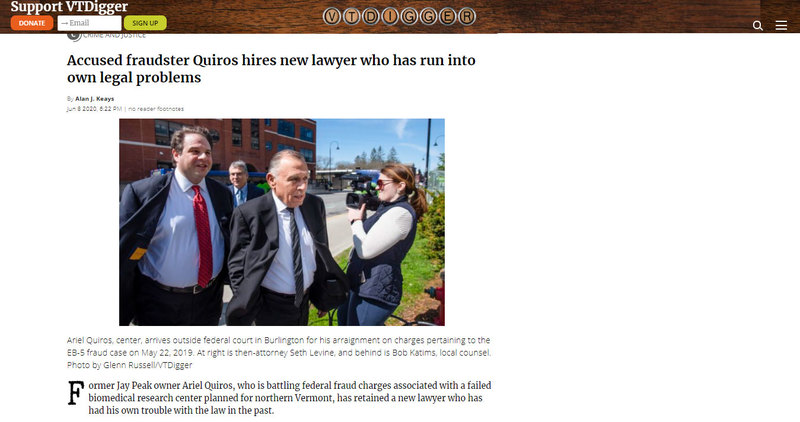 Ariel Quiros, center, arrives outside federal court in Burlington for his arraignment on charges pertaining to the EB-5 fraud case on May 22, 2019. At right is then-attorney Seth Levine, and behind is Bob Katims, local counsel.

Former Jay Peak owner Ariel Quiros, who is battling federal fraud charges associated with a failed biomedical research center planned for northern Vermont, has retained a new lawyer who has had his own trouble with the law in the past.

Neil Taylor, an attorney in Coral Gables, Florida, filed paperwork Monday in federal court in Vermont seeking to be allowed to practice in the court in this state for the purpose of representing Quiros.

As part of that filing, Taylor included information about his past, including a seven-year legal fight that ended with him pleading guilty in 2002 to a misdemeanor charge of filing a false document with the Internal Revenue Service, resulting in him serving year probation.

The Florida Bar Association also later in 2005 issued a “non-published” admonishment of Taylor in connection with that incident.

Judge Geoffrey Crawford on Monday afternoon granted Taylor’s request to be able to represent Quiros in the criminal proceedings in federal court in Vermont.

Quiros was indicted in May 2019 in federal court in Vermont along with other business partners on charges of fraud and making false statements to the government. The charges are related to a proposed $110 million biomedical research center in Newport, known as AnC Bio Vermont, that was never built despite raising $80 million from more than 160 EB-5 immigrant investors.

The U.S. Securities and Exchange Commission had termed that project “nearly a complete fraud.”

Seth Levine, a lawyer with Levine Lee LLP based in New York City, had been leading Quiros’ criminal defense until last month when the attorney moved to withdraw his representation. According to court records, Levine’s move came as Quiros was “significantly in arrears” in paying his lawyer fees. At a hearing in the case last month, Quiros told Judge Crawford that he may not have the funds to hire a new attorney, and could be filing for a taxpayer-funded, court-appointed lawyer.

However, now it appears that won’t happen with Taylor entering the case.

Levine wasn’t the first attorney who had problems getting paid by Quiros. In March 2017 Quiros fired a legal team who had initially represented him in earlier civil legal actions tied to a series of other EB-5 funded projects in Vermont, including massive upgrades at Jay Peak.

Those attorneys claim Quiros owed them $3 million in fees at that time for their representation, and they have been seeking to collect ever since.

Quiros’s hiring of Taylor in the criminal case signals that the matter may be heading to trial rather than resolved with any type of plea deal. According to his firm’s website, Taylor is a “veteran of well over 400 felony jury trials.”

The website adds, “There are few things worse than engaging criminal defense counsel for a contested case and being advised, shortly thereafter, that pleading guilty is the best option. Do not let it happen to you!”

Taylor, reached Monday by email, declined to discuss the case at this time, writing that he still needed to get up to speed on it. The case has been designated by the federal court as “complex,” and involves millions of pages of financial records and communications.

Robert Katims, of the Burlington-based firm Hoff Curtis and who has been serving as local counsel for Quiros, said Monday that he will remain in that position, referring any additional questions to Taylor.

In seeking approval to practice in the state for the Quiros case, Taylor submitted several documents Monday in the federal court in Vermont. The filings included records from the disciplinary action against Taylor as well as a transcript from a change of plea hearing in his criminal case.

According to the transcript of the hearing where Taylor entered his guilty plea held in federal court in Florida in 2002, the prosecutor outlined the details behind the charge.

The prosecutor said that in January 1993 Taylor received $75,000 in cash as attorney fees for his representation of a defendant in a drug trafficking case.

Taylor later filed an IRS form stating that he received the $75,000 cash from a man on behalf of that defendant. But in fact, the prosecutor said, the money came from a different man than the one he listed on the IRS filing.

According to a filing submitted Monday by Taylor, he blamed that error on his confusion between two men with the same first name.

Taylor was charged, leading to seven years of legal wrangling.

“After two trials in United States District Court, both of which ended in hung juries, I was exhausted and penniless,” Taylor’s filing stated. “The Government offered the misdemeanor plea and I accepted it, bringing the matter to a conclusion.”

Later, Taylor received a letter of admonishment for professional misconduct in the matter brought by the Florida Bar Association following an order of the Florida Supreme Court.

The filings submitted Monday by Taylor included a letter from the Florida Bar Association stating he was currently an “active member in good standing.”

Quiros, along with two other defendants named in the same indictment, is set to stand trial in January.

Quiros, a Miami businessman, his former partner Bill Stenger, Jay Peak’s past CEO, and president, and Bill Kelly, an adviser to Quiros, have all pleaded innocent to fraud and false statement charges against them tied to the AnC Bio Vermont project.

Quiros and Stenger have also faced a slew of legal actions in recent years stemming from the projects they headed in Vermont.

Federal and state regulators in April 2016 brought separate civil enforcement actions against the two men accusing them of misusing $200 million of the more than $400 million raised through the EB-5 program to finance their projects, including massive upgrades at Jay Peak ski area.

Those two cases were eventually resolved with monetary settlements. For Quiros, that included agreeing to surrender an estimated $81 million in assets to the federal government. Those assets included both Jay Peak ski area and Burke Mountain resort.