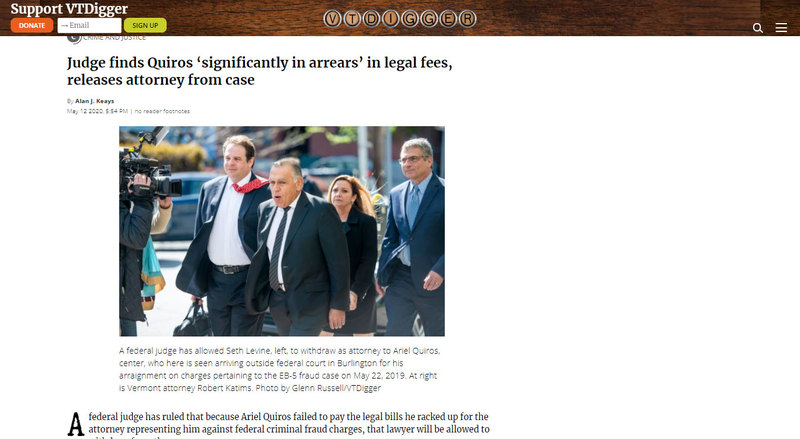 A federal judge has allowed Seth Levine, left, to withdraw as attorney to Ariel Quiros, center, who here is seen arriving outside federal court in Burlington for his arraignment on charges pertaining to the EB-5 fraud case on May 22, 2019. At right is Vermont attorney Robert Katims.

A federal judge has ruled that because Ariel Quiros failed to pay the legal bills he racked up for the attorney representing him against federal criminal fraud charges, that lawyer will be allowed to withdraw from the case.

Quiros, under indictment for allegedly defrauding foreign investors out of millions in a failed biomedical research center project in Vermont, suggested during a public portion of a hearing Friday that money woes were at the heart of his lawyer’s bid to withdraw his representation.

Judge Geoffrey Crawford, in an order released Tuesday, wrote that while talking to Quiros and his attorney Seth Levine behind closed doors on Friday more details about those financial problems emerged.

In that private session that occurred with the parties over the phone, Crawford wrote that he reviewed a letter submitted to him by Quiros and heard more details about the unpaid legal bills.

“The ex parte letter and the conference call provided more information about the basis of the motion, which is non-payment of legal fees and expenses,” Crawford wrote in the order released Tuesday. “The court finds that Mr. Quiros is significantly in arrears in paying his attorneys.”

Non-payment of legal fees, the judge added, is an “appropriate” basis for an attorney to withdraw from the case. Crawford then issued Levine’s motion to get off the case.

Quiros, a Miami businessman, was charged in a multi-count indictment returned by a federal grand jury in Vermont last May. Also named in the same indictment are his former partner Bill Stenger, Jay Peak’s past CEO and president, and Bill Kelly, an adviser to Quiros.

The charges against the men, which include allegations of fraud and making false statements to the government, are all related to the collapsed AnC Bio Vermont development in Newport.

The exact amount Quiros owes to Levine was not revealed in the order released Tuesday, with the judge writing that the letter from Quiros and as well as a summary of the private telephone call will both be sealed.

“This information will remain non-public,” the order stated.

The call took place behind closed doors, and without the prosecutors in the case present, to ensure Quiros’ attorney-client privilege, the parties said during the public portion of the hearing Friday.

Quiros did hint during the public part of the hearing that his financial situation was behind his attorney’s request to withdraw his representation. Quiros told the judge of a “fixed asset” that he had but couldn’t sell, in large part due to the Covid-19 pandemic.

“If I was given the proper time to sell and take care of these costs I would do it immediately because of the importance of this case,” Quiros told Crawford.

Levine, a lawyer with Levine Lee LLP based in New York City, has been leading Quiros’ defense team, and has a pending motion to dismiss the charges against his client. Levine, reached Tuesday afternoon, declined comment.

The judge, in his order Tuesday, wrote that by June 15 Quiros has to notify the court if he has retained new private counsel, if he will file an application to determine if he qualifies financially for a court-appointed counsel, or submit a notice that he intends to represent himself.

Until June 15, the order stated, Levine will remain as a lawyer representing Quiros.

Robert Katims, a Burlington-based attorney representing Quiros as local counsel, declined Tuesday to comment. Levine’s motion to withdraw had said that Katims may follow in seeking to withdraw from the case.

However, the motion stated, Katims “indicated” he may be willing to stay on as local counsel if an attorney not admitted to practice in federal court in Vermont was hired by Quiros as new counsel.

Quiros said during the hearing Friday that he likely didn’t have the “financial wherewithal” to hire a new private attorney, and he was told, if he qualified, one could be appointed by the court for him at taxpayers’ expense.

AnC Bio was to be located at the old Bogner plant in Newport.

The change of attorney for Quiros could put the current January trial date in doubt, with millions of pages of records for a new lawyer to review as well as the complex web of financial transactions related to the case.

It has already taken a long time for the case to even reach its current point. More than four years ago, in April 2016, federal and state regulators brought separate civil enforcement actions against Quiros and his then partner, Stenger.

The criminal charges were not brought until May of last year.

The earlier civil legal actions accused Quiros and Stenger of misusing $200 million of the more than $450 million they raised for several projects in Vermont’s Northeast Kingdom from immigrant investors through the EB-5 visa program. That program is meant to encourage investment in the United States in exchange for permanent residency in the country.

However, due to the alleged fraud, the more than 160 investors who put a total of over $80 million into the biomedical research development in Newport were not able to meet the EB-5 program’s job-creating requirements needed for them to gain that permanent U.S. residency through the project.

In fact, the project didn’t even get off the ground before regulators brought it to a halt, with the U.S. Securities and Exchange Commission calling it “nearly a complete fraud.”

Quiros and Stenger eventually reached monetary settlements in those enforcement actions, with Quiros agreeing to surrender to the federal government $80 million in assets, including his ownership of Jay Peak and Burke Mountain ski resorts in Vermont.

Quiros has also had previous trouble paying lawyers in the stream of civil lawsuits that have come from investors and other parties in the various projects he and Stenger.

At one point, in March 2017, Quiros fired an earlier team that had been representing him, and they claimed he owed him $3 million in unpaid bills and expenses. Those lawyers have been working to collect the full amount they say they are owed ever since.