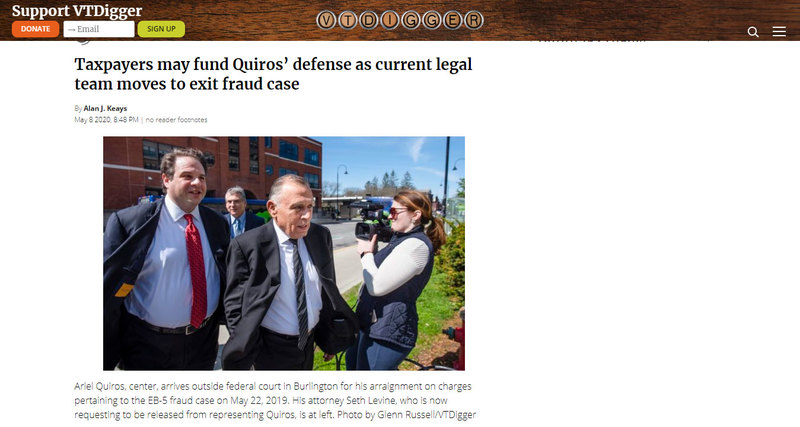 Ariel Quiros, center, arrives outside federal court in Burlington for his arraignment on charges pertaining to the EB-5 fraud case on May 22, 2019. His attorney Seth Levine, who is now requesting to be released from representing Quiros, is at left.

Ariel Quiros may soon be looking for a new legal team.

Though Jay Peak’s former owner told a judge during a video hearing Friday he likely won’t be able to afford it.

The lead lawyer representing Quiros for a year since federal charges were brought accusing him of defrauding investors out of millions of dollars in a collapsed biomedical research center project in Vermont has requested to withdraw from the case.

Seth Levine, a lawyer with Levine Lee LLP based in New York City and who has been heading Quiros’ defense team, filed a motion this week seeking to withdraw his representation, citing a “breakdown in the attorney-client relationship.”

Federal Judge Geoffrey Crawford held a hearing on that request that took place over video Friday morning. The judge then took the matter under advisement and he said he would “likely” issue a ruling on the request to withdraw later in the afternoon.

However, by 5 p.m. Friday no entry had been made in the federal court’s system online filing system.

“There are a variety of issues that have arisen,” Levine told the judge during the late-morning hearing. “I would prefer to not get into those issues in a public forum.”

Prior to issuing his ruling, Crawford said he would read a letter Quiros submitted to the judge about the matter. Crawford also agreed to a request from Levine to speak with him and Quiros in private Friday afternoon to discuss the letter and the situation, while also protecting attorney-client privilege.

The judge said he would seal Quiros’ letter, keeping federal prosecutors and the public from seeing it.

While specific details on the “breakdown” between Quiros and Levine were not discussed during the video hearing Friday morning, Quiros comments to the judge during that proceeding suggested that his finances, or lack of them, are playing a role.

Quiros, in speaking to the judge, referred to a “fixed asset” he had.

“If I was given the proper time to sell and take care of these costs I would do it immediately because of the importance of this case,” Quiros told the judge.

However, he said, the Covid-19 pandemic has complicated his ability to do that.

“At this particular moment, with the pandemic upon me, and with the limitation that I have, it only increased the problem but the problem already existed prior to the pandemic,” Quiros said to the judge, adding, “I don’t want you to think I am using the pandemic as an excuse.”

Crawford told Quiros that if he granted Levine’s motion to withdraw, he could retain new counsel.

Geoffrey Crawford, chief judge of the United States District Court for the District of Vermont.

“Yes,” Quiros replied. “But I won’t have the financial wherewithal to do that.”

“You understand,” Crawford told Quiros, “that anybody charged in this court with a crime also has the right to, if they qualify financially, has the right to file an application to have counsel appointed for them and defend them at government expense.”

“Yes, I have been alerted of that, your honor,” Quiros responded.

Quiros also told the judge repeatedly during the hearing that he has been satisfied with Levine’s representation.

“I have no qualms with my attorneys in the sense of lack of professionalism or lack of attention to my matter,” Quiros said. “I believe wholeheartedly they have done what I would consider at my level a very professional job.”

However, according to the filing, Katims has “indicated” he would be willing to continue serving as local counsel for Quiros if he retains a lawyer who is not admitted to practice in federal court in Vermont.

Assistant U.S. Attorney Paul Van de Graaf, the prosecutor on the case, told the judge during the hearing Friday he had no position on Levine’s request to withdraw.

“The government wants Mr. Quiros to have counsel that can serve him well,” Van de Graaf said, adding, “I  don’t feel like the government can take much of a position in light of our lack of knowledge.”

Quiros, a Miami businessman, his former partner Bill Stenger, Jay Peak’s past CEO and president, and Bill Kelly, an adviser to Quiros, were all charged in the same indictment returned by a federal grand jury in Vermont last May.

They each face charges of fraud and making false statements to the government tied to the failed AnC Bio Vermont development in Newport. That project involved more than 160 foreign EB-5 investors and over $80 million in the development that barely got off the ground and was later termed by federal regulators “nearly a complete fraud.”

It’s unclear what effect Quiros’ representation issue will play in keeping the case on its current trial track. The case had initially been set for trial in October, however, when coronavirus pandemic hit motions deadlines were pushed back as well as the trial date, moving it to January 2021.

A new attorney would likely need time to get up to speed on the case, which has been termed “complex” by the court due to the millions of pages of records as well as the tangle of financial transactions.

Levine had also filed a motion to dismiss the charges against his client, which remains pending.

Quiros has run into problems with legal bills in the past as a result of investigations and lawsuits  brought in connections with EB-5 financed projects he headed along with Stenger in Vermont’s Northeast Kingdom.

More than 800 immigrant investors put a total of hundreds of millions of dollars into those series of projects, including massive upgrades at Jay Peak as well as the failed AnC Bio Vermont development, as they sought permanent U.S. residency through the federal EB-5 visa program.

In April 2016 federal and state regulators brought separate civil enforcement actions against the two men accusing them of misusing $200 million of the more than $400  million raised through the EB-5 program to finance their projects.

Those cases were later resolved with monetary settlements, including Quiros agreeing to surrender an estimated $81 million in assets to the federal government. Those assets included both Jay Peak ski area and Burke Mountain resort.

In March 2017 Quiros fired a legal team who had initially represented him in those earlier civil legal actions, with those lawyers claiming at that time he still owed them $3 million.