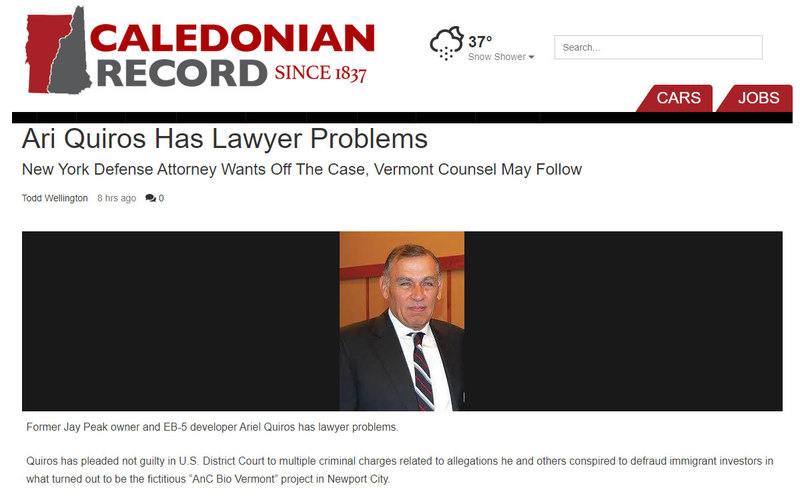 Quiros has pleaded not guilty in U.S. District Court to multiple criminal charges related to allegations he and others conspired to defraud immigrant investors in what turned out to be the fictitious “AnC Bio Vermont” project in Newport City.

Quiros has been represented by defense attorney Seth L. Levine of New York City and Vermont defense attorney Robert W. Katims who - as a member of the Vermont bar - serves as local counsel.

But on Tuesday, attorney Levine asked the court for permission to leave the case.

“I now request to withdraw from representing Mr. Quiros in this matter because, in my judgment, there has been a breakdown in the attorney-client relationship and professional considerations require termination of the representation,” wrote Levine in his motion to withdraw.

Attorney Levine also suggested in his motion that attorney Katims may also be withdrawing from the case.

“While Mr. Katims has advised that he also plans to file his own application to withdraw from the representation, he has indicated that he would be willing to serve as local counsel in the event Mr. Quiros retains new counsel who is not a member of the bar of the Court.”

Chief Federal Court Judge Geoffrey W. Crawford has since scheduled a hearing by video conference today at 11:00 a.m. in U.S. District Court in Burlington to consider the motion.

The government alleges that the men bought and razed Northeast Kingdom properties to make way for a hotel, but the so-called “Ponzi” scheme they are accused by authorities of operating collapsed before anything was built.

Quiros and Kelly are accused of doubling the AnC Bio Vermont construction cost to $110 million, committing wire fraud by diverting $47 million to Quiros who allegedly used it to cover loans and for personal investments, and concealing facts from state and federal officials. Quiros is also charged with money laundering.

In February, attorneys Levine and Katims filed a motion to dismiss the criminal indictments, alleging that the federal receiver appointed by the SEC in the civil EB-5 case seized his laptop computer and subsequently turned over to the government approximately 2,000 “privileged communications” involving legal advice from Quiros’s former attorneys at the New York law firm of Richardson & Patel LLP.

The motion alleges unauthorized government access to thousands of communications between Quiros and his attorneys.