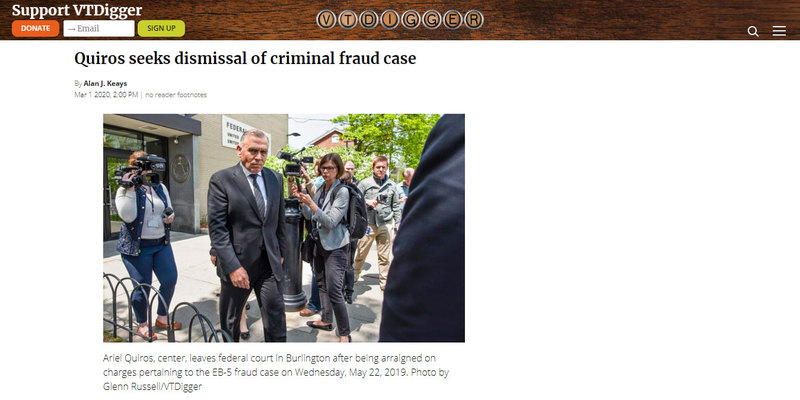 Ariel Quiros, center, leaves federal court in Burlington after being arraigned on charges pertaining to the EB-5 fraud case on Wednesday, May 22, 2019.

The former owner of Jay Peak accused of defrauding foreign investors out of millions of dollars in a failed biomedical research center in Vermont says criminal charges against him should be thrown out because prosecutors used privileged information to indict him.

Seth Levine, a lawyer for Quiros, submitted the filing this week in federal court in Burlington seeking to dismiss the fraud and false statement charges against his client tied to the collapse of the AnC Bio Vermont development in Newport.

Quiros, his former business partner Bill Stenger, Jay Peak’s past CEO and president, and Bill Kelly, an advisor to Quiros, were all charged in the same indictment returned by a federal grand jury in Vermont last May.

In addition to the filing from Quiros to dismiss the charges, an attorney for Kelly submitted a similar motion this week in federal court making nearly identical arguments.

“The Court should dismiss the Indictment because the Government used privileged information to indict Mr. Quiros,” Levine wrote in the filing.

“Alternatively,” he added, the judge should hold “a hearing to determine the extent to which the Indictment and the Government’s trial team has been tainted through its improper exposure to Mr. Quiros’s privileged communications.”

Levine wrote in the filing that attorney David Gordon had represented Quiros from June 5, 2013, to March 25, 2017, which included a period in 2014 when Quiros was served subpoenas from the U.S. Securities and Exchange Commission compelling him to provide documents and testimony.

The SEC at the time was investigating developments headed by Quiros and Stenger, including massive upgrades at Jay Peak financed through the federal EB-5 immigrant investor program.

The SEC and Vermont regulators in April 2016 brought civil enforcement actions against Quiros and Stenger, accusing the two men of misusing $200 million of the more than $350 million they raised from foreign investors for the projects.

Both Stenger and Quiros have reached monetary settlements in those enforcement cases, with neither man admitting or denying wrongdoing.

Michael Goldberg at the time was appointed by the court hearing in the SEC case as a receiver to oversee the many assets associated with the alleged fraudulent actions, including the Jay Peak ski area. Goldberg remains in that position today.

The recent filing to dismiss the criminal case against Quiros stated that in response to a subpoena, the receiver provided information to federal prosecutors obtained from a laptop belonging to Quiros. That allowed prosecutors, the filing stated, access to about “2,000 privileged communications involving legal advice that Mr. Quiros received from Mr. Gordon.”

The filing added, “The Government inexplicably reviewed these materials without first seeking Court approval, either ex parte or otherwise, and relied on them in indicting Mr. Quiros.”

According to a footnote in Levine’s filing, he submitted a sealed version of the motion on Dec. 9, and another filing related to it on Feb. 7.

It is unclear why the filings were submitted under seal.

The footnote does state, “At the direction of the Court, Mr. Quiros files this truncated, publicly available version.”

The motion that was publicly filed this week does have some portions that are redacted. The 12-page filing from Levine includes another footnote that stated, “Citations to sealed exhibits and references to sealed filings have been removed from the ‘Background’ sections.”

Quiros fired Gordon and other members of his legal team in March 2017, claiming they kept him in the dark and also overbilled him.

At the time of investigations by the SEC and Vermont regulators, MSK and Gordon represented all the Jay Peak entities, not only Quiros but Stenger and Kelly as well.

Goldberg’s lawsuit seeks to hold the law firm and Gordon responsible for the alleged investor fraud committed by Quiros and his associates.

Gordon and his firm have denied the allegations and have asked a judge to toss out the receiver’s case against them. 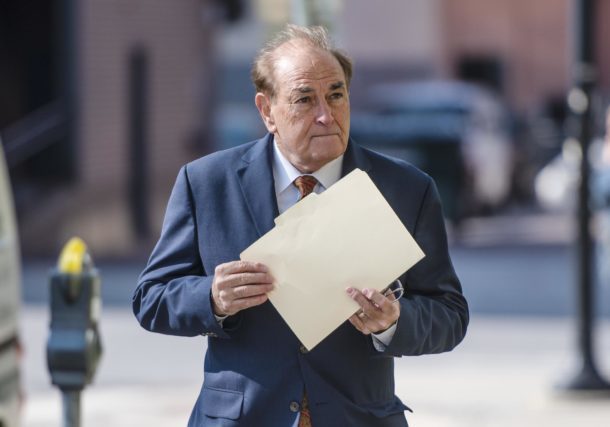 Kelly, in his motion to dismiss the criminal charges against him, alleges that the federal prosecutors also have more than 600 emails “with or about Gordon” from November 2014 to April 2016, “all of which have been extracted from Mr. Kelly’s laptop and provided to the government by the Receiver.”

Robert Goldstein, Kelly’s attorney, wrote in that motion that “the government likewise concedes that, more than mere possession, it has utilized Mr. Kelly’s communications with Mr. Gordon to build its case against Mr. Kelly.”

Goldstein declined to comment Friday on the filing. Levine could not immediately be reached Friday for comment.

Brooks McArthur, an attorney representing Stenger, said Friday he does not intend to file a similar motion seeking to dismiss the charges against his client.

McArthur added, “I don’t think there’s any privileged material between Stenger and Gordon, but even if there was, it may be that we call Gordon to testify.”

The criminal cases against Quiros, Stenger, and Kelly are set for trial in October in federal court in Rutland.