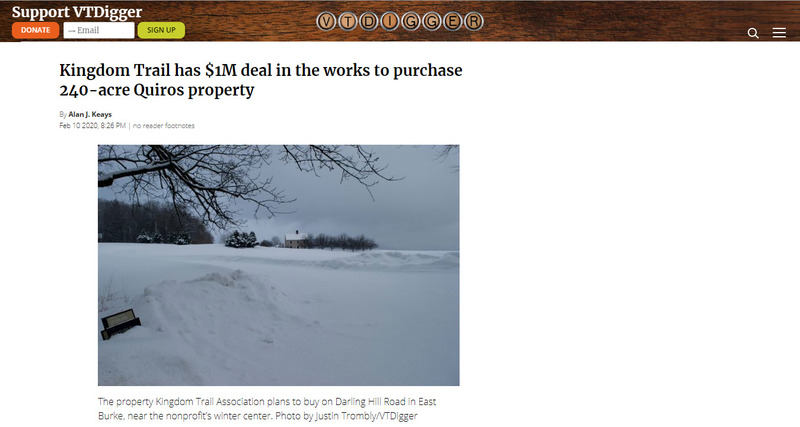 The property Kingdom Trail Association plans to buy on Darling Hill Road in East Burke, near the nonprofit’s winter center.

The court-appointed receiver in charge of overseeing many of the real estate holdings of the indicted former owner of Jay Peak has a deal in place to sell a property in Lyndon to the Kingdom Trail Association for a little more than a $1 million.

Michael Goldberg, the receiver, submitted a court filing Monday outlining the proposed sale of the home at 2266 Darling Hill Road and accompanying 240 acres in Lyndon formerly owned by Ariel Quiros.

Quiros was indicted in May along with three associates on criminal charges in an EB-5 investor fraud scandal tied to a failed biomedical research facility proposed for Newport.

Two years earlier, Quiros reached a settlement in a civil lawsuit brought by the U.S. Securities and Exchange Commission, agreeing to surrender an estimated $81 million in properties he owned, including Jay Peak and Burke Mountain ski resort.

In addition, the Darling Hill Road property, also known as Heaven’s Bench, was among those Quiros agreed to turn over to the regulators to help recoup money for foreign investors who put funds into projects headed by the developer.

The sale of the Darling Hill Road property to the Kingdom Trail Association for $1.05 million still needs the approval of federal Judge Darrin P. Gayles, who is presiding over the SEC civil case and settlement brought against Quiros in Florida. That case was filed in Florida because that is where Quiros resides and many of his businesses are located.

According to Goldberg’s court filing Monday, the Darling Hill property includes a five-bedroom, colonial-style home built in 1998 on a 10.29 acres lot with 240 acres of adjoining land. He described the home being in “poor condition” in need of “extensive” repairs.

Calls to Kingdom Trail Association on Monday about the land deal were referred to Abby Long, the organization’s executive director. Long could not immediately be reached Monday for comment.

Kingdom Trail Association is a nonprofit organization that oversees and maintains more than 100 miles of bike trails in Burke and the surrounding area. During the winter, it maintains 15 kilometers of cross country ski trails at 2079 Darling Hill Road, across the road from the Quiros property.

The proposed land deal comes at a time when some of the landowners allowing access to the properties for trails are pulling back on their support for mountain bikers. At the end of last year, three of them decided to stop letting bikers on their land after decades of doing so.

Those three landowners are all on Darling Hill Road, which is where the Quiros property is also located.

It’s unclear from the court filing Monday how the Kingdom Trail Association is financing the $1 million purchase.

A 260 acre property in Lyndon, owned by Ariel Quiros, is planned to be sold to Kingdom Trail Association, according to court filings. Century 21 Farm and Forest

Goldberg wrote in his filing that he had listed with Century 21 Farm and Forest Realty to sell the house on the Darling Hill Road property for $749,000, and later reduced it to $699,000.

“The listing garnered interest including an offer for purchase,” according to the filing. “The Receiver, however, did not sell at that time.”

The filing stated that after “modifications to the listing” to make it “more attractive,” the 240-acre parcel was added increasing the purchase price to $1.050 million.

Kingdom Trail Association and the receiver have now entered into a purchase and sale agreement at that price, according to the filing.

“Kingdom oversees a network of biking trails in and around Burke, Vermont,” the filing stated. “Hundreds of thousands of people flock to Burke each year to utilize Kingdom’s trail network and the Burke Mountain Hotel benefits by this increase in tourism in the Burke area,” the filing stated.

Goldberg, as the court-appointed receiver, also oversees the Burke Mountain Hotel and Conference. That EB-5 financed hotel project was headed by Quiros and his then-partner, Bill Stenger, former CEO and president of Jay Peak.

The receiver’s filing Monday stated that an appraiser recently valued the Darling Hill property at $1.1 million.

In seeking the judge’s approval, Goldberg wrote that selling the property would be in the best interest of the investors and bring to a close cost to the receivership associated with holding it, which he valued at a little more than $102,000 over more than three years.

“The sale will result in additional cash being deposited into the Receiver’s account,” Goldberg wrote, “which is maintained for the purpose of ultimately satisfying claims filed by the investors and creditors.”

Many other Quiros’ properties overseen by the receiver remain up for sale, including Jay Peak ski resort.

Goldberg has previously sold off two New York City luxury condos owned by Quiros, selling them for a little more than $6 million combined.

The indictment was returned by a grand jury more than three years after state and federal regulators brought civil investor fraud lawsuits against Stenger and Quiros.

Those lawsuits alleged the two men had misused $200 million of the more than $450 million they raised through the federal EB-5 immigrant investor program to finance several development projects in northern Vermont, including massive upgrades at Jay Peak.

A trial in the case is currently set for October.