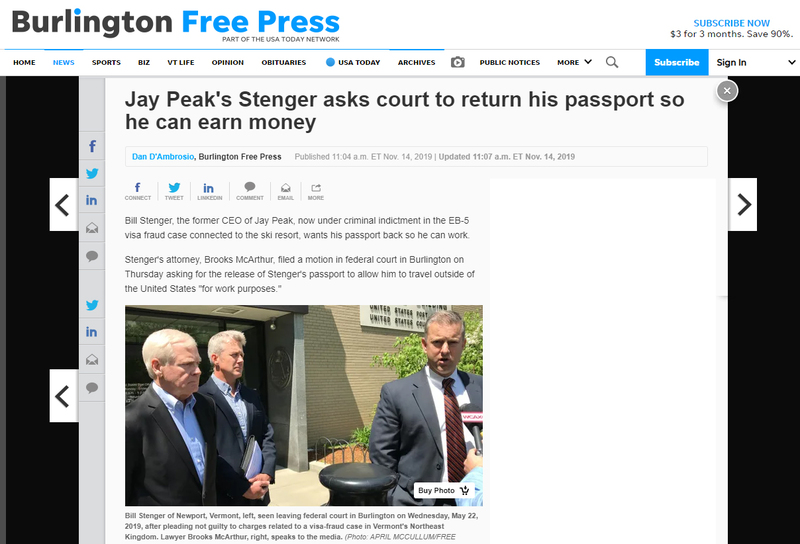 Bill Stenger of Newport, Vermont, left, seen leaving federal court in Burlington on Wednesday, May 22, 2019, after pleading not guilty to charges related to a visa-fraud case in Vermont's Northeast Kingdom. Lawyer Brooks McArthur, right, speaks to the media.

Bill Stenger, the former CEO of Jay Peak, now under criminal indictment in the EB-5 visa fraud case connected to the ski resort, wants his passport back so he can work.

Stenger's attorney, Brooks McArthur, filed a motion in federal court in Burlington on Thursday asking for the release of Stenger's passport to allow him to travel outside of the United States "for work purposes."

McArthur explains in the motion that since being fired from his consulting position at Jay Peak at the end of May, Stenger has been without income except for his Social Security benefits.

Under the EB-5 program, foreign nationals who invest $500,000 in a project in an economically struggling region of the country can receive residency if the project creates a specified number of jobs. Stenger raised about $400 million for projects at Jay Peak and Burke Mountain from some 800 investors in countries from Brazil to South Africa, Vietnam and China.

Stenger and former Jay Peak owner Ariel Quiros were accused by the U.S. Securities and Exchange Commission in April 2016 of perpetrating a "Ponzi-like scheme," in which they diverted money raised from the investors to a variety of shell companies and financial accounts. In the case of Quiros, the SEC alleged $50 million was diverted for his personal use.