Is the Dream over? ADF's EB-5 SLS Casino posts six straight months of losses, over $80 million for 2015 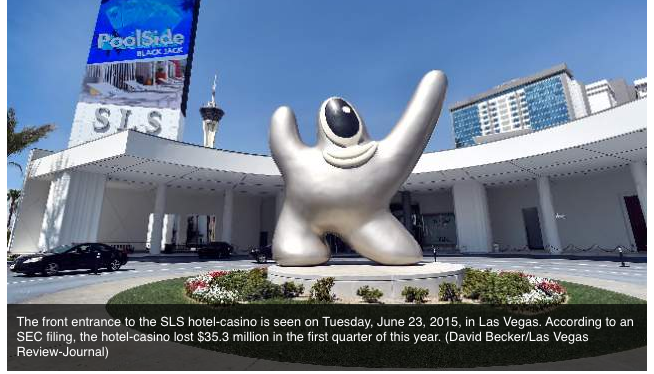 EB-5 Regional Center American Dream Fund's SLS Las Vegas offerings in which more than 600 mostly Chinese green card applicants have invested over $300 million and their future is in the words of Casino.org "on the kind of streak you don’t want to be on in Sin City: a losing one."

"For the sixth straight month, the property that is located on the site of the former “Rat Pack” Sahara Hotel & Casino has lost millions of dollars, totaling $48.6 million in the second quarter and $83.9 million for 2015."

"According to Securities and Exchange Commission (SEC) filings by its owner, Stockbridge/SBE Investment Company, LLC, a joint partnership formed to oversee its proprietorship of the Las Vegas property, the hotel and casino “incurred net losses and negative operating cash flows” stemming from “substantial debt,” “factors beyond our control,” “extensive regulation and licensing,” and “general business and competitive conditions.”"

Blob Not So Happy

"Adding insult to injury, public opinion on the SLS reboot hasn’t been met with much praise, with many visitors befuddled before they even enter the hotel doors thanks to the so-called Happy Blob, a metallic statue that is said to be an ode toSam Nazarian, chairman of SBE."

"Aiming to bring a “playful, yet approachable sophistication” to the north end of the Strip, initial reviews of the vintage-meets-modern décor looked like a highlight of the revamp, but as the hotel has continued to struggle financially, even leading to layoffs last fall, service and upkeep at SLS appears to be headed in the wrong direction."

Of more than 1,000 reviews on Yelp, the average is 3/5 stars, roughly the same as ratings from Google critics. But the actual comments, both online and to news sites, have been somewhat more direct in their assessment of the property.

“Where’s the attraction to compel people to visit the SLS? All they have besides basic gambling is some goofy-assed statue,” wrote one visitor on the Las Vegas Review-Journal site.

Google pundits were no friendlier:

“This hotel was terrible. The room they gave me was like a prison cell. The walls were concrete and painted gray.”

“As I entered the non-smoking room a huge burst of cigarette smell entered my nose.”

“Location, location, location” is an old adage that is proving true for SLS as well. Despite what should be a prime Strip location right at Sahara and Las Vegas Boulevard, the resort is the north neighbor to the now-defunct Riviera, the legendary casino that closed its doors May 4th, and the Fontainebleau, a bankrupt resort that has sat unfinished since 2009. Across the street sits a vacant lot that will be the future home to Resorts World Las Vegas, though construction still hasn’t begun."

"SLS has plenty of challenges ahead, but its corporate leadership remains steadfast. “We continue to invest in marketing and advertising to increase awareness of the SLS brand and attract new customers,” its SEC filing stated."

"Could be what is called in the gambling world “chasing,” but sometimes, even a chaser’s luck can change. Of course, more often it doesn’t, but depending on how deep into its pockets Stockbridge/SBE is willing to search for loose change, the future of SLS is now anybody’s guess."