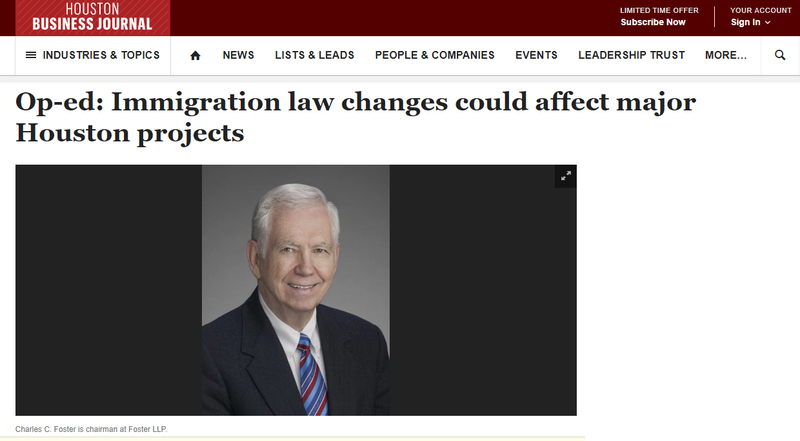 The EB-5 investor program, which has provided significant funding to major Houston real estate developers and a viable way to legally immigrate, is about to undergo a major regulatory change. Immigrating to the U.S. is highly restricted, but one of the few viable ways to immigrate without family or employment-sponsorship has been through the EB.

Final Regulations published by U.S. Citizenship & Immigration Services (CIS), effective November 21, 2019, substantially amends the EB-5 investor program through which foreign nationals who do not have a close U.S. citizen or lawful permanent resident family member, or employment sponsorship still have a direct way to immigrate and obtain their U.S. lawful permanent residency or “green card.”

The Immigration Act of 1990, signed by President George H.W. Bush, provided that one could immigrate based upon a $1 million investment in a new enterprise creating 10 full-time jobs for U.S. workers. However, if the enterprise was located in a Targeted Economic Area (TEA) — a rural or high unemployment area — the minimum investment amount has been $500,000. As a practical matter, as this program evolved after the 2008 recession, it became a de-facto five-year $500,000 loan program paying only a low interest rate for major real estate projects through an approved CIS Regional Center. For many, this has been the only way to qualify for U.S. lawful permanent residency, which would otherwise be impossible without a lawful qualifying U.S. family member or sponsorship by a U.S. employer.

It is clear that a growing number of EB-5 investor petitions will be filed on Form I-526 before the Final Regulations go into effect to take advantage of the $500,000 minimum investment requirement. This will likely result not only in increased backlog under the EB-5 annual 10,000 quota, but also a significant processing backlog.

As you often hear, in radio and T.V. commercials, this truly is a “once-in-a-lifetime opportunity.” Thus, for those foreign nationals who ever have thought about acquiring U.S. Lawful Permanent Residency, and will never be able to do so through a family or employment option, as lawyers like to say: “time is of the essence,” and the sooner a decision is made, the better.

For developers, there will be far fewer, available, and qualified investors at $1.8 million, but the good news is, at that dollar amount, fewer investors will be needed. Furthermore, for foreign nationals seeking residence in other countries offering economic and political stability, the U.S. EB-5 program, even at the higher dollar amount, is still relatively competitive in comparison.