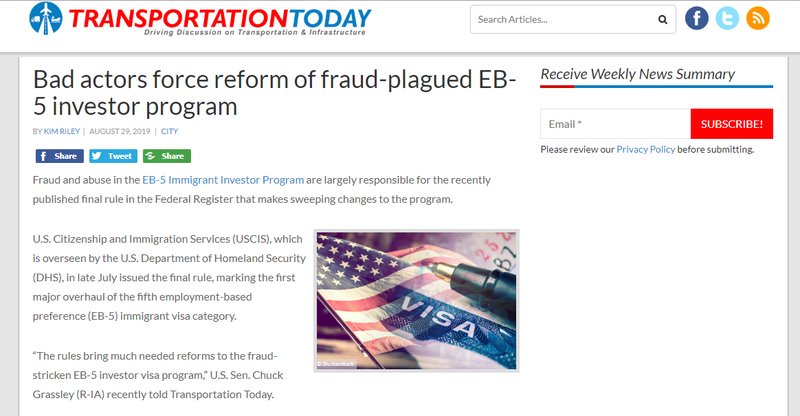 Fraud and abuse in the EB-5 Immigrant Investor Program are largely responsible for the recently published final rule in the Federal Register that makes sweeping changes to the program.

The EB-5 program currently makes qualified foreign nationals eligible to obtain green cards in exchange for investment between $500,000 and $1 million in a new commercial enterprise in the United States that creates at least 10 American-based jobs.

The ongoing deception in the program, the senator said, points to move away from its original congressional intent to generate increased U.S. capital investment in economically distressed communities and rural areas around the nation — known as Targeted Employment Areas (TEAs).

What’s been happening is that the EB-5 program has mostly benefited wealthier areas where developer-led gerrymandering — achieved by packaging adjoining Census tracts to create the impression of a TEA — has allowed them to obtain foreign investment, largely from China.

“For the better part of a decade, I’ve raised concerns about how the EB-5 program has been abused to steer investment away from rural America,” said Sen. Grassley.

Bad actors have taken advantage of the fact that states have leeway in defining a TEA, a policy gap that the senator says has allowed them to draw maps that define TEAs to conveniently cover wherever they wanted to build another skyscraper.

“All of a sudden, investment dollars intended for communities in need were being sucked up for glitzy projects in America’s most well-to-do neighborhoods,” Sen. Grassley wrote in a July 29 opinion piece for the Daily Caller. “Real-estate developers sold expensive condos and created no new jobs for Americans, while the immigrants put no skin in the game. Their investments weren’t at risk and they didn’t so much as help build America as they helped rich developers get richer.”

Consider the EB-5 program’s monikers, which paint a clearer picture of the fraud: the cash-for-visas program; greenbacks for green cards; and in China, it’s known as the “golden visa.”

The fraud and abuse are so rampant, in fact, that there’s a USCIS webpage dedicated to reporting it.

According to USCIS, common EB-5 fraud schemes may involve anybody, including the petitioner (the immigrant investor) and the applicant, along with anyone or anything associated with the applicant, like the regional center principal, the sponsor, the developer of the new commercial enterprise, and the job-creating entity president, owner or manager, among others.

But is that enough?

“The USCIS is incompetent,” Michael Gibson, managing director at USAdvisors.org, told Transportation Today. “They release no information on the capital raised, who is raising it, and where it is going to the public. This leads to misinformation and fraud.”

Gibson added that USCIS is “not able to manage this program and should be replaced with another agency that is capable of providing information on the effectiveness of this program to create U.S. jobs.”

USAdvisors.org is a Registered Investment Advisory Firm that provides such information, including for EB-5 Regional Centers (RCs), which are USCIS-designated organizations that sponsor capital investment projects for investment by EB-5 investors.

Essentially, RCs are an industry born from the EB-5 program in which foreign citizens put money into a federally approved RC entity to then find investment opportunities and manage investments.

And when it comes to fraud, it appears that certain RCs are heavily involved.

USAdvisors.org operates the EB-5 Investments website, which lists related EB-5 visa litigation, regulatory and investor actions, court documents, and news. The number of documented EB-5 fraud cases on the site is staggering, with tons of examples of failed projects.

For instance, a pending case filed on May 22 in California by dozens of Chinese citizens targets the Golden California Regional Center, which received $555,000 from each of 90 Chinese investors who were promised green cards for their investments.

In the lawsuit filed in Santa Clara County (Calif.) Superior Court, 24 of the 90 Chinese investors allege that the Golden California RC was run by a Santa Clara County businesswoman named Bethany Liou, who allegedly said the total $45 million investment was for real estate development that would qualify them for green cards. But their citizenship never materialized, according to information on the website.

Another pending civil case filed Feb. 6 by Chinese investors in the Federal District Court for the District of Nevada alleges fraud by the Las Vegas Economic Impact Regional Center, which includes Weidner Management LLC; Eastern Investments LLC; and Sahara Investments LLC, among others.

The defendants — who are developers and former managers of the Asian-themed Lucky Dragon casino-hotel that was built, open for a year, closed, and recently sold in Las Vegas — are facing lawsuits from some of the plaintiffs who are Chinese investors. They want refunds and complain they haven’t gained conditional immigration admission to the United States via the EB-5 immigration program, according to the EB-5 Investments website.

Despite the ongoing and extensive fraud, Gibson pointed out that there have been numerous successful EB-5 transportation projects, particularly in Pennsylvania.

One example is the total $417 million Pennsylvania project that received support from the Delaware Valley Regional Center, which launched its first EB-5 program in 2014 and raised $200 million in EB-5 funding for the high-profile highway construction project to connect the Pennsylvania Turnpike and Interstate 95.

The project also “received wide support from all levels of the government,” according to the Delaware Valley RC, which said the full assistance of the Pennsylvania Turnpike Commission enabled it “to fully subscribe to the 400 investors needed for the project in only 10 months.”

The four-stage, long-awaited interchange connecting I-95 and the Pennsylvania Turnpike was officially completed and opened in the fall of 2018.

Nevertheless, numerous fraud investigations continue into EB-5 program financing by the Securities and Exchange Commission and the U.S. Department of Justice.

Sources hope that the newly published USCIS final rule for the EB-5 program will help clean up all the messes.

Specifically, the rule will increase minimum investment amounts and revise the standards for TEA designations, both of which will help ensure that investments are directed to rural and high unemployment areas, rather than to the wealthy, urban centers now benefitting from the program.

Gibson said it’s important that the federal government has issued the new EB-5 rule because it “needed to institute a few basic reforms to account for the low investment amount and abuse of the TEA designation.”

The new final rule also will improve the current situation by moving “more projects away from low-unemployment MSAs [metropolitan statistical areas] to rural areas,” he added.
But as Sen. Grassley pointed out, “there’s still more work to be done.”

“Fully tackling fraud and national security vulnerabilities requires congressional action,” the senator said. “As Congress considers whether to extend the program, these rules can serve as a launchpad for a more productive discussion with industry advocates.”

The EB-5 program is set to expire on Sept. 30 and must be reauthorized by Congress.