Indian applicants to be now on waitlist for EB-5 visa 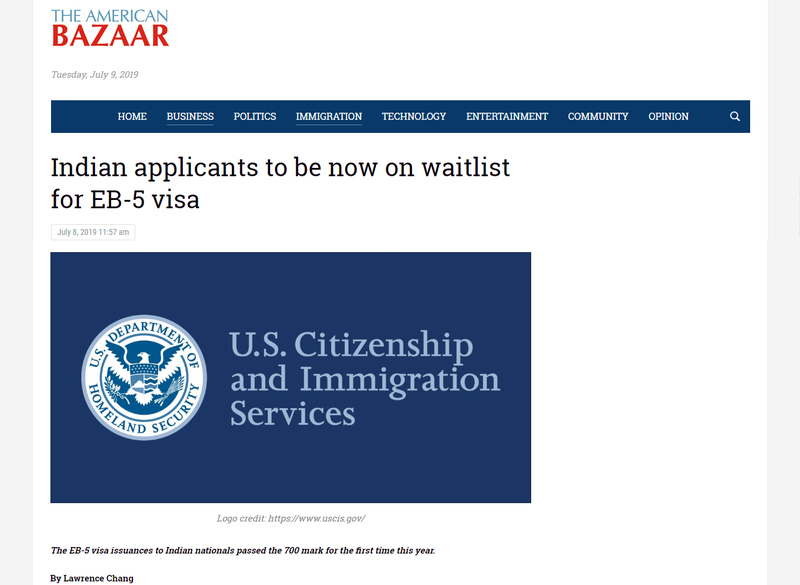 The EB-5 visa issuances to Indian nationals passed the 700 mark for the first time this year.

Indian applications for the EB-5 “investor” visa have skyrocketed over the last couple of years, so much so that the State Department has now announced that Indian applicants will be placed on a waiting list. Yet even with a delay, the EB-5 visa remains one of the fastest and route to Green Card for Indian nationals.

Each year, 10,000 EB-5 visas are made available for individuals and families who are able to invest $500,000 with a Regional Center in the United States. Since no country is allowed more than seven percent of the total, there is a cap of 700 visas per country per year. The Regional Center uses the investment to fund real-estate projects that create and sustain at least ten full-time American jobs.

This threshold was passed in June, meaning it has already used up its annual quota with several months of the “visa year” remaining. The year runs from October to September meaning no EB-5 visas will be issued to Indian nationals until the year resets on October 1.

As the EB-5 visa has grown in popularity in India, applications have spiked, leading to a backlog with the US authorities. When the visa year resets in October, the next in line for a visa are applicants who filed in May 2017. This means that an applicant filing today will have to wait until visas have been made available to any successful applications made since then.

It is difficult to establish how long this will be. We estimate that around 1,000 applications have been made in the past year. One application does not equate to one visa as a whole family can be included in a single application. However, some applicants will be denied, and others will drop out of their own accord.

Many of the rest of our clients are entrepreneurs who are keen to unlock the potential of the vast American market. These clients are able to move to the United States on other types of visas such as L1 and E2 visas which allow them to set up their business while they wait for a Green Card to become available through the EB-5 program.

Since this all means locking your investment up for longer, it is important to place your money with a reputable Regional Center. Be sure to look for a Regional Center offering a good project in a robust real estate market.

Despite the delay, the EB-5 remains the fastest route to a US Green Card.